Witness at Navy SEAL trial: I killed victim out of mercy

The testimony is the latest setback for prosecutors and a big boost for Gallagher. 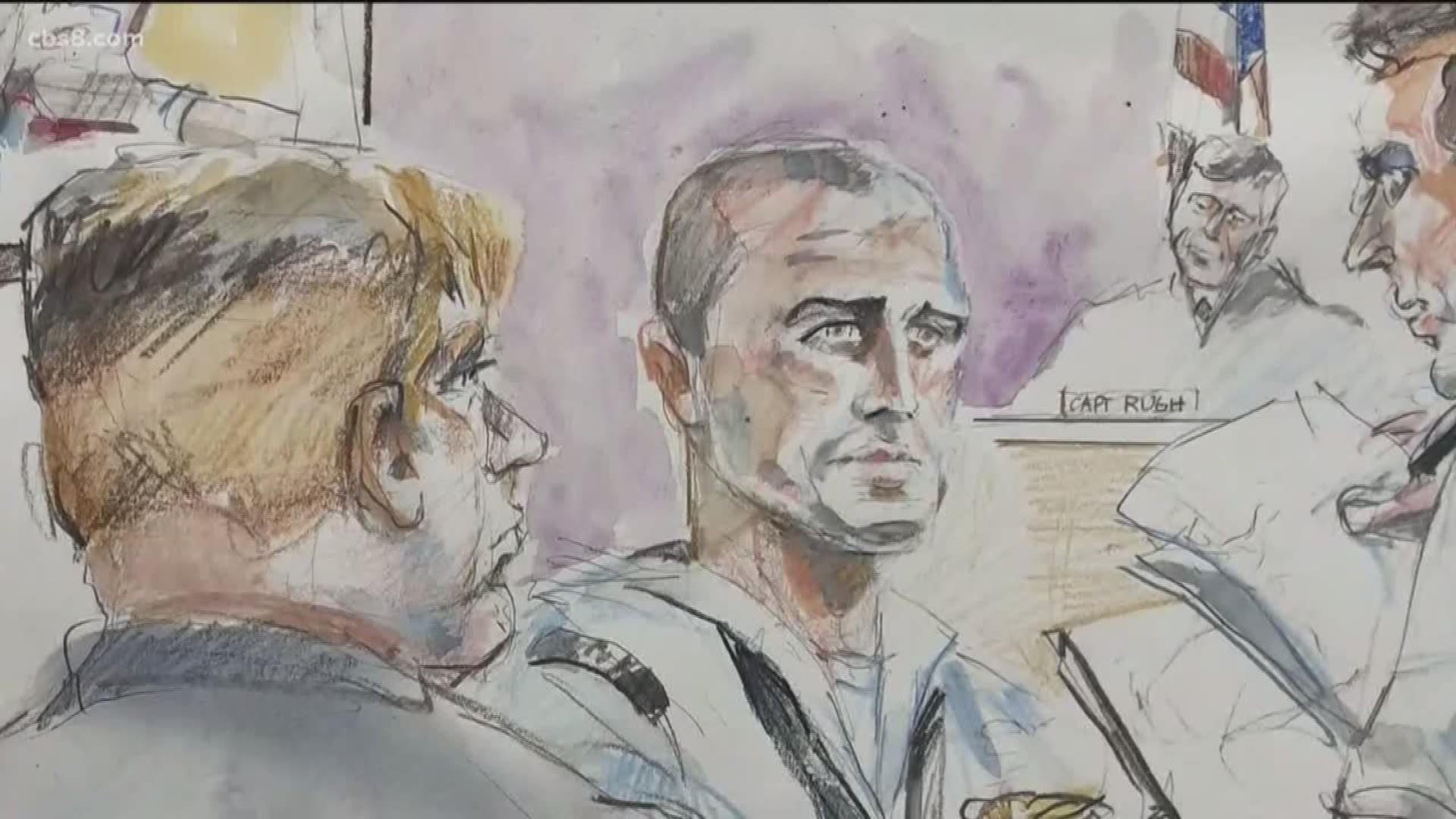 SAN DIEGO (AP) — When the prosecution called a special forces medic to testify, they expected him to bolster their murder case against a decorated Navy SEAL accused of stabbing an Islamic State fighter in his care.

Corey Scott delivered on that count, saying Special Operations Chief Edward Gallagher had unexpectedly plunged a knife into the adolescent detainee after treating his wounds in 2017 in Iraq.

But the government was stunned with what came next: Scott took the blame for the killing, saying he had suffocated the boy shortly after Gallagher had stabbed him. Scott called the asphyxiation an act of mercy.

It was a stunning twist in an already tumultuous case that illustrates the challenges of prosecuting war crimes cases, especially those involving members of the secretive special forces, and the risks of granting immunity.

Scott wanted to invoke his Fifth Amendment right against self-incrimination when called by the prosecution. But he was granted immunity and ordered to testify.

A visibly angry prosecutor accused Scott of lying, saying he had told investigators a different story several times and changed it only after he was granted immunity and ordered to testify.

"He's got a wife and family," Scott said. "I don't think he should be spending his life in prison."

The testimony is the latest setback for prosecutors and a big boost for Gallagher, who is fighting charges of premeditated murder in the boy's death and attempted murder in the shooting of civilians.

The defense has said Gallagher only treated the prisoner for a collapsed lung and that disgruntled sailors fabricated the murder accusations because he was a demanding leader and they didn't want him promoted.

When asked if Scott's testimony, which did not dispute that Gallagher stabbed the militant in his care, would mean a lesser charge of premeditated attempted murder for the special operator, defense attorney Tim Parlatore said it only proved one thing: "It means he's not guilty," he said.

Gallagher's wife said she was relieved to have the truth come out.

"To hear today that someone's finally had the bravery to stand up for the truth was refreshing after all these years," Andrea Gallagher said as she stood with her husband and their two children outside of court.

The Navy said in a statement it will not drop the premediated murder charge and it's up to jurors to decide the credibility of the witness.

Before the stabbing, Scott said that he and Gallagher had stabilized the sedated prisoner who was wounded in an airstrike and that he was breathing normally through a tube inserted to clear his airway.

Scott said he was shocked when Gallagher, the platoon's leader, stabbed the boy at least once below the collarbone. He said there was no medical reason for it. Gallagher then grabbed his medical bag and walked away.

"I was startled and froze up for a little bit," Scott said.

Scott said the patient would have survived the stabbing, but he plugged the youth's breathing tube with his thumb because he believed the prisoner would eventually be tortured by the Iraqi forces who had captured him and delivered him to the SEAL compound for medical treatment.

"I knew he was going to die anyway, and I wanted to save him from waking up to whatever would happen to him," Scott said.

RELATED: Prosecutor: Navy SEAL bragged he 'got' victim with knife

Scott said no one asked him how the patient died.

Four SEALs and one former SEAL have taken the stand. Scott was the second to say they witnessed Gallagher stab the militant.

Several of the SEALs also described instances when they said Gallagher had fired at civilians, once shooting an old man.

Gallagher's case has drawn the attention of President Donald Trump, who is reportedly considering a pardon.

The trial comes after months of turmoil and follows a judge's removal of the lead prosecutor over a bungled effort to track emails sent to defense lawyers in order to find the source of news leaks.

The judge determined that the effort violated Gallagher's constitutional rights and reduced the maximum possible punishment from life in prison without parole to the possibility of parole.

The seven-man jury is made up of five Marines and two sailors — all veterans of war zones. A two-thirds majority — at least five — is needed to convict. Anything less ends in acquittal.

The Navy said the jury can convict Gallagher of a lesser charge, such as premeditated attempted murder, which carries a maximum penalty of life with parole. There is no minimum sentence.