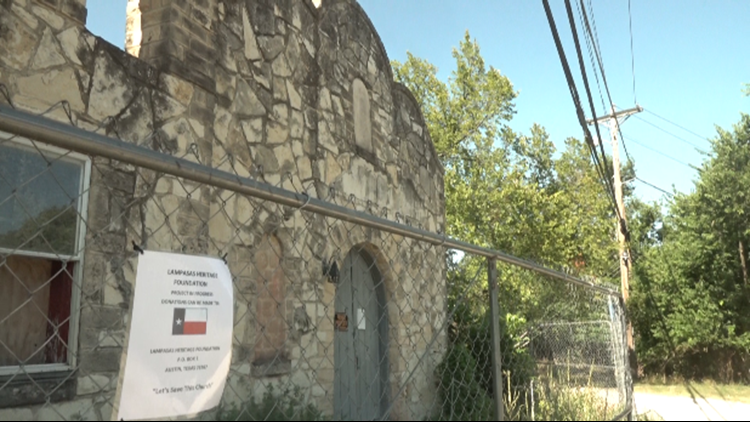 LAMPASAS, Texas — The Lampasas community is working to save a small stone church after the roof caved in and a wall collapsed back in May. Thanks to the Lampasas Heritage Foundation, that work is ready to begin.

The church, which was previously called Saint Paul's Independent Methodist Episcopal, was built in the 1940's. It eventually fell into disrepair and the owner, Garry Milligan, did not have the resources to repair it on his own.

When the church's roof caved in due to weather, Milligan was worried the City of Lampasas would have to tear it down. He would lose it, despite a promise made to his mother.

"My mom, when she was ill and about to pass, she made me promise I would take care of the Church," Milligan said. "They was so proud of this church."

But then, the community stepped in.

Renovator and Keystone Hotel owner Andrew Fish created the Lampasas Heritage Foundation, a nonprofit, to take responsibility for the church. He then brought in a master mason to deconstruct and stabilize parts of the stone building to prevent further collapse. A local business owner donated fencing to Milligan so he could secure the church site and make it safe before further construction begins.

Mason Juan Vidal assured 6 News in June that the church could be fixed.

"It's fixable, it can be brought back to life," Vidal told Channel 6. "It's just going to take a little time. All of these rocks are reusable. It just has to be cleaned up a little bit. I've been doing this for 25 years, so to me, it's not very difficult."

While the building can be saved, Fish said the project would greatly benefit from help from the public in both labor and money.