'Children should be off limits' the mayor said during a conference call with city council members on Thursday. 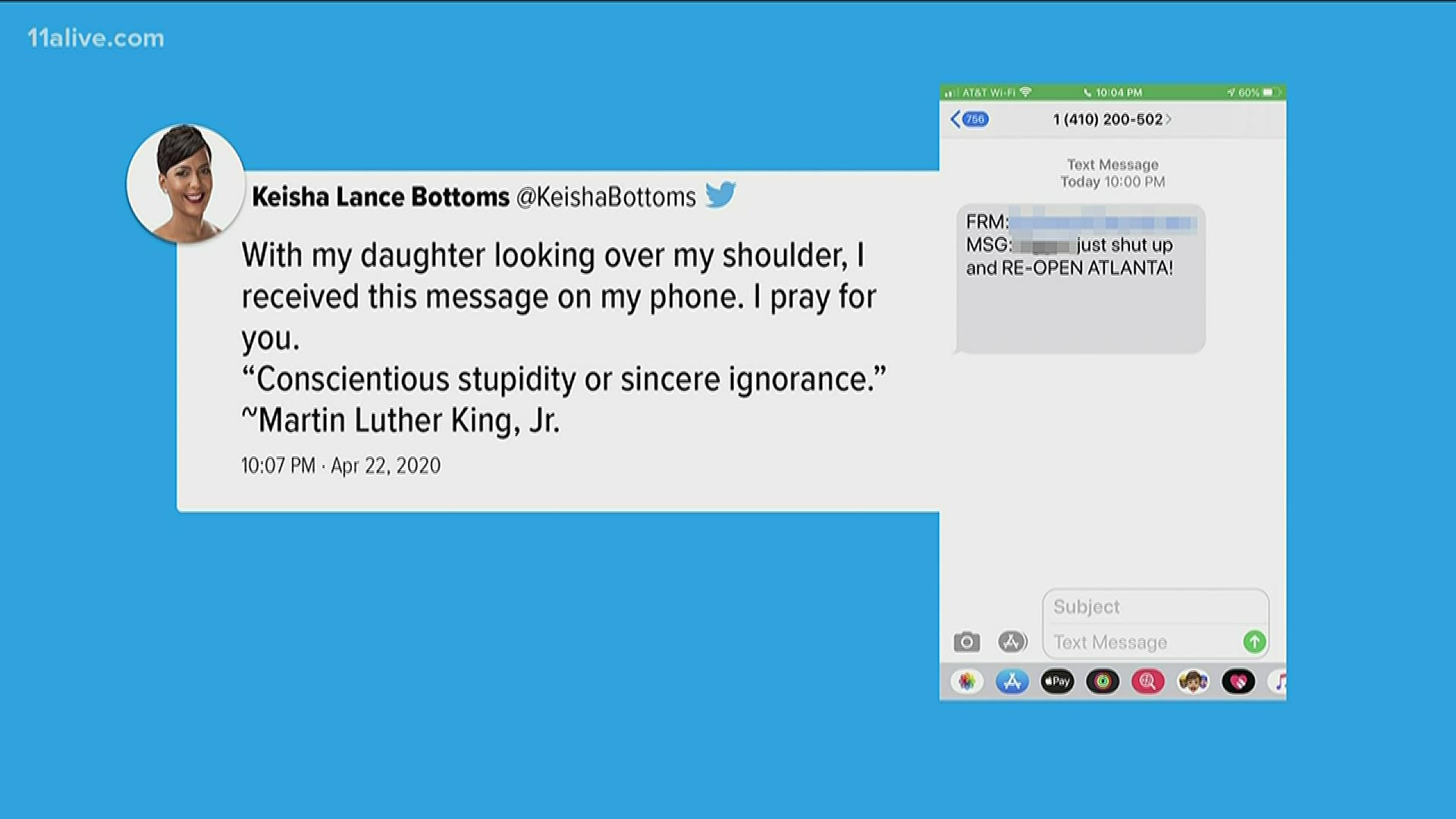 ATLANTA — Atlanta Mayor Keisha Lance Bottoms said Thursday during a conference call with city council members that the same racist slur she received in a message on Twitter was also sent to her 12-year-old son.

"I was most concerned that not only did I receive it, but my 12-year-old son received it as well," the mayor said. "So that was more concerning to me than anything."

The mayor tweeted out a screenshot of the message on Wednesday night after she received it.

The photo of the message shows that the person used the n-word and said "just shut up and RE-OPEN ATLANTA."

RELATED: Atlanta mayor tweets photo of message where someone called her a racial slur

"With my daughter looking over my shoulder, I received this message on my phone. I pray for you," the mayor tweeted then.

She added a Martin Luther King, Jr. quote in the tweet: "Conscientious stupidity or sincere ignorance."

In Thursday's conference call, she said she spoke afterward with Ambassador Andrew Young and discussed the incident, and that "he just reminded me that white supremacy is a sickness and we don't run for office to.. we are not cowards."

"I will continue to use my voice to speak on behalf of our community. Children should be off limits as it relates to any and everything, but we are fine and thank you for your concern," she told council members.

Within minutes of her posting the photo on Twitter, it was retweeted hundreds of times; many even offered words of encouragement in the comments.

"Racism will always cut off its own nose to spite its face," one Twitter user said in the comments. "Thank you for being vocal and wise. Georgia needs your voice to combat the overwhelming ignorance running the show."

"This is so disgusting, Mayor Bottoms. Please know that we Atlantans truly appreciate and respect your leadership keeping us safe through this crisis," another person said.

"I’m with you. Keep fighting the good fight," another tweet reads.

Georgia has been in the national spotlight for days regarding Gov. Brian Kemp's decision to reopen the economy. On Monday, Kemp announced that some businesses can start reopening Friday, with more that can open their doors next week.

RELATED: Atlanta mayor on reopening Georgia: 'I can't reconcile the logic behind opening a bowling alley'

The views on what measures the state should take next have been mixed. Bottoms has said openly that she disagreed with Kemp's decision.

"I feel that we are still empowered to use our voices and to use our common sense, and that’s what I will continue to do as mayor," she told 11Alive on Tuesday.  "And I have a good working relationship with the governor and I know that that will continue, but on this we disagree.

"And his authority as governor is what it is, and it certainly supersedes my authority as mayor on paper - but it doesn’t supersede my voice, and I will continue to use my voice to urge our communities, our business owners and our residents to stay in," she said during the interview.

I took my camera out to document Atlanta during the coronavirus pandemic. Here's what I saw

Islands of protection in a sea of COVID-19: Dozens of senior living facilities in Georgia reporting zero cases

These are the coronavirus hot spots in Georgia