The law will go into effect on July 1. 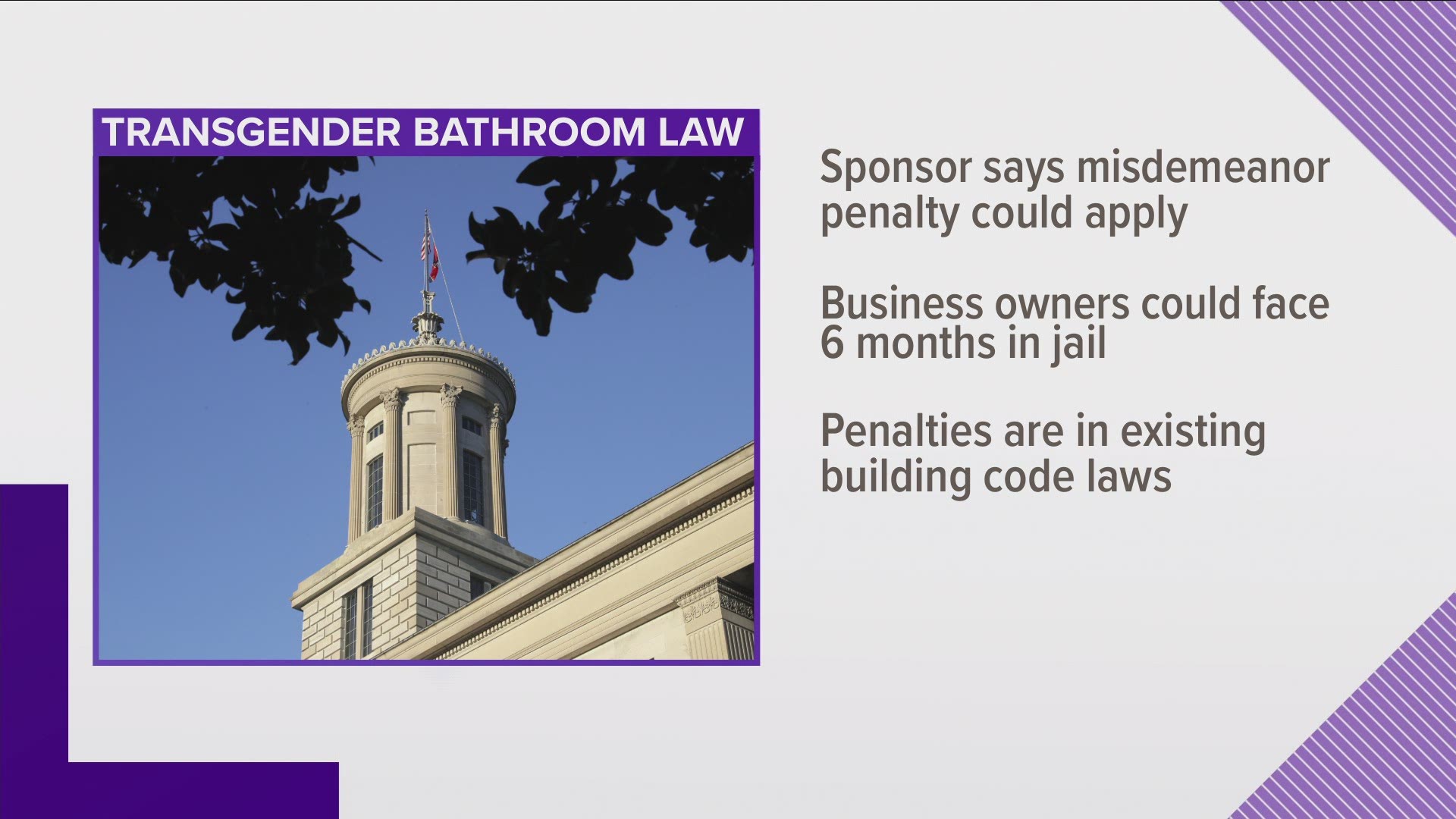 NASHVILLE, Tenn. — The sponsor of Tennessee’s new law requiring businesses and government facilities to post signs if they let transgender people use the bathrooms of their choice now says those who refuse could face up to six months in jail.

Rep. Tim Rudd said this week that the misdemeanor penalty could apply.

That seems to contradict what he told fellow lawmakers in March when he said his bill “does not provide any fines or penalties at this point" when a committee passed what would become the final version.

He says he was telling the truth because the penalties weren't in the bill itself, but rather the existing building codes law.

Tennessee will become the first state in the United States to require businesses and government facilities open to the public to post a sign if they let transgender people use multiperson bathrooms, locker rooms or changing rooms associated with their gender identity.

LGBTQ advocacy group the Human Rights Campaign decried the bill as discriminatory and said the required signs are “offensive and humiliating.”

The law will go into effect on July 1.

Tennessee lawmakers are considering a bill that will ask businesses to put up signs on the bathroom entrances notifying people about who is allowed in which restroom.

The bill, sponsored by Republican Representative Tim Rudd, is heading to the Senate Judiciary Committee.

“They’re trying to solve a problem that doesn’t exist,” he said. “I’ve personally never heard of this being an issue anywhere.”

“It protects everyone, whether you are a transgender [person] or regardless. If a woman opens the door and sees a man standing in a restroom, she might start screaming and take action,” Rudd said. “If your notice is outside the door it lets everyone know what to expect.”

But it’s raising questions on whether it’s targeting a specific group of people.

“There’s pandemic on, and I would think they’d have better things to do than discriminate against a group of people,” Andrews said.

He also said the bill doesn’t apply to his business because they have a single unisex bathroom, but he says the bill is discriminatory — and Democratic state Representative Mike Stewart agrees.

“I would have thought that the time for using bathrooms to discriminate against people is something in our far distant past,” Rep Stewart said. “We need to focus on real problems and not on kind of creating make-believe problems.”

“I don’t want to wait ‘till someone gets harmed — either a heterosexual or transgender [person],” Rep. Rudd said. “We just want to get a proper warning to people.”

The bill says businesses who fall under the category would have 30 days to put up the signs after being notified they’re not in compliance.

This story was originally reported by WSMV in Nashville.