The president said the reverberations of the recall election could be felt nationally. 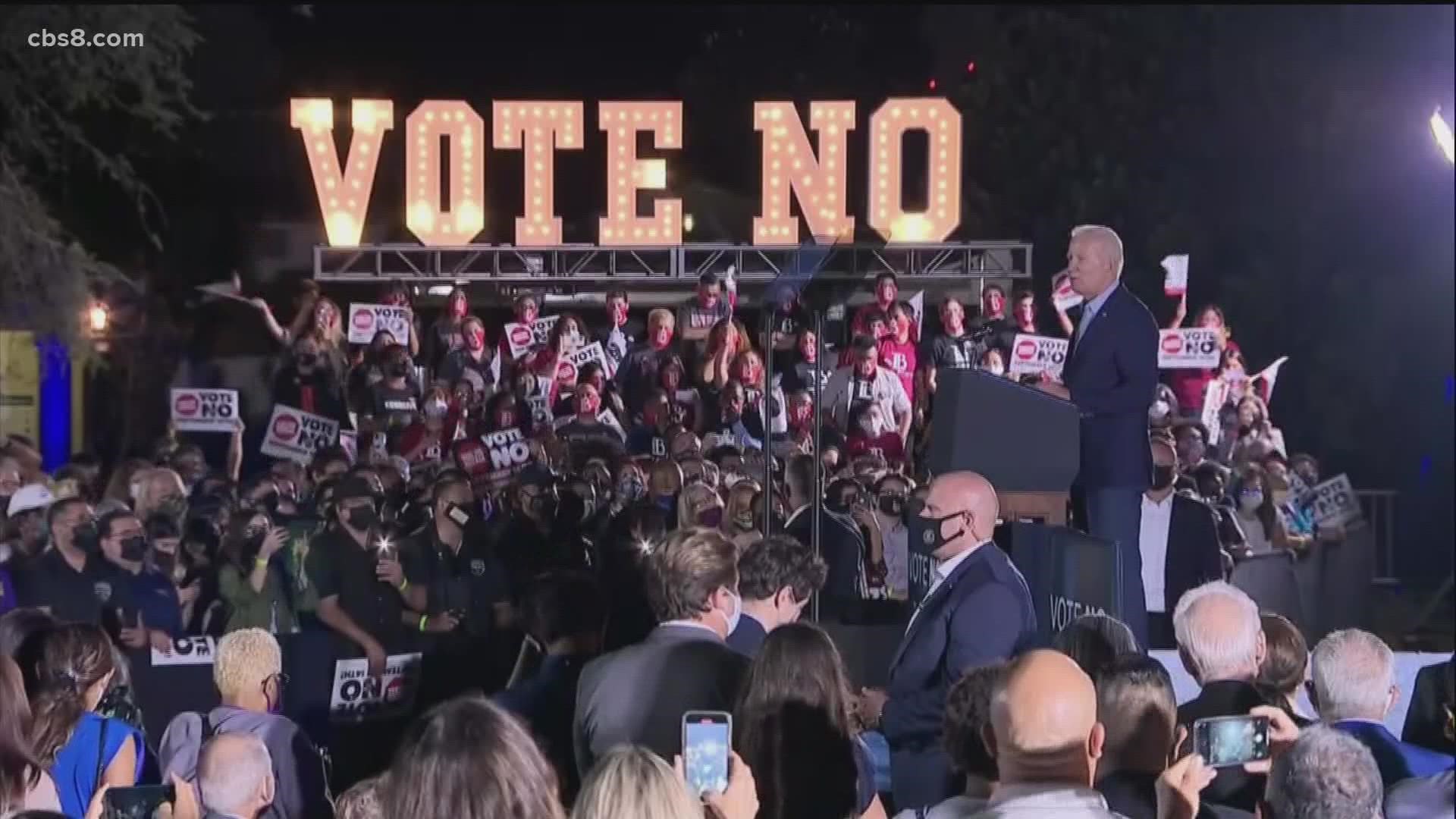 LONG BEACH, Calif. — President Joe Biden made a long-touted visit to California Monday in support of Gov. Gavin Newsom one day ahead of the deadline to return ballots and vote in the gubernatorial recall election.

Biden and Newsom's appearance at Long Beach City College was the final rally of the governor's campaign to defeat the recall effort. Tuesday is the deadline for voters statewide to cast a ballot or return their vote-by-mail ballot.

And @POTUS has arrived. Introduced himself as “Jill Biden’s husband” pic.twitter.com/VtnrhRz4O6

"You either keep Gavin Newsom as your governor or you get Donald Trump," Biden told the crowd of approximately 1,100, including Sen. Alex Padilla, D-California and Los Angeles Mayor Eric Garcetti.

The president put the stakes of the recall election in stark terms, according to the Associated Press, saying the results could reverberate across the nation. He cast the recall as an opportunity to show that leadership and science matter.

"We need science, we need courage, we need leadership. We need Gavin Newsom," Biden said during the approximately 15-minute address. "A governor who follows science, who's got the courage to do what's right."

"The choice should be absolutely clear. Gavin Newsom. You have a governor who has the courage to lead."

The rally was the last of Newsom's campaign to attempt to defeat the recall effort. Tuesday is the deadline for voters statewide to cast a ballot or return their vote-by-mail ballot.

Newsom has been stepping up his campaign activities in recent days, campaigning in Northern California last Wednesday with his longtime ally, Vice President Kamala Harris.

Republican talk show host Larry Elder, the leader in the polls to replace Newsom if the recall is successful, dismissed the presidential support for the governor.

"If Gavin Newsom thinks that flying in Joe Biden and Kamala Harris -- not exactly the most admired government officials at the present time -- will make him look better, that's all you need to know about how oblivious and detached Newsom is from a large majority of Californians," Elder tweeted last week.

"Washington, D.C., is not going to save Gavin Newsom," Faulconer said. "He wants to make it about anything else but him. This recall is a referendum on Gavin Newsom's failure. That's why so many Californians not only signed the recall petition, but that's why Californians in all parts of the state, all party registrations, are ready for a change at the top."

Elder attended a pair of events in the Los Angeles area on Monday, with another stop planned in San Pedro Monday afternoon and a volunteer rally planned in Costa Mesa Monday night.

During a morning appearance in Monterey Park, Elder repeated many of the recall's themes -- criticism of Newsom's handling of issues such as homelessness, crime and the COVID-19 pandemic, accusing him of "ignoring science" in the imposition of business and school closures.

Elder also shot back at recall critics who have labeled it a "Republican" movement.

"There are 2 million people that signed that petition," Elder said. "A good quarter of them to a third of them were the people who voted for him just two years earlier. I'm talking about Independents and Democrats. Sixty- three percent of Hispanics voted for him two years ago. Now the majority of Hispanics want him out."

Newsom on Monday morning again took to social media to urge voters to reject the recall, writing, "Tomorrow CA has the power to stand up for progress. For science. For women's rights. For immigrant rights. For commonsense gun safety. Tomorrow we can show the rest of the nation that we won't let Republicans drag our state backwards. Make sure your voice is heard."

Biden will spend the night in the Southland, then depart for Denver on Tuesday morning for an event to tout his "Build Back Better" economic recovery agenda.

Earlier Monday, Biden stopped in Boise, Idaho, for a visit to the National Interagency Fire Center and Sacramento afternoon to survey wildfire damage.

Biden arrived at Long Beach Airport aboard Air Force One at 6:12 p.m., exited the plane with Newsom trailing him at 6:22 p.m.

The motorcade to Long Beach City College began at 6:25 p.m. There were multiple groups of anti-Biden protesters spotted along the route. Just blocks from the school, there was a cluster of at least 200 anti-Biden protesters holding signs that said "Trump Won," "Unvaxxed Lives Matter" and "Recall Newsom."

There was a line of families near the entrance to the college holding signs welcoming Biden, who arrived at Long Beach City College at 6:36 p.m.

As Biden departs Tuesday, Newsom and his potential successors -- nearly four dozen of them -- will begin the waiting game as in-person voting enters its final day and the deadline arrives for people to return their vote- by-mail ballots. According to the Secretary of State's office, more than 8 million vote-by-mail ballots had been returned statewide as of Sunday. Nearly 22.4 million were sent to voters.

The recall ballot contains only two questions: should Newsom be recalled -- removed -- from office, and if so, who should replace him?

Although 46 replacement candidates are on the ballot, Elder has consistently led most polls gauging who would take over in the governor's office should Newsom be recalled. He has never held public office before, but he's an outspoken opponent of government mandates -- such as those requiring mask-wearing or receiving COVID vaccines -- and has vowed to eliminate them immediately if elected.

Beyond Elder, fellow Republicans Faulconer and businessman John Cox have been the most prominent candidates seeking the office.

In his campaign, Faulconer has touted his work as San Diego mayor as evidence of what he plans to do for the state, saying he has experience "cleaning up our streets, keeping neighborhoods safe and bringing people together."

"This recall is a referendum on Newsom's failures," Faulconer wrote on social media Monday. "He wants to distract from that. I'll clean up our streets, end open air drug markets and make our state more affordable for everyone as governor."

Faulconer has touted his ability to work cooperatively with politicians on both sides of the aisle.

Cox, who unsuccessfully challenged Newsom in the 2018 election, has touted himself a political outsider who will bring a business-like administration to Sacramento. He has taken to headline-grabbing campaign theater during the race, appearing alongside a live bear to support his beauty- versus-beast campaign theme. He also toted an 8-foot-tall ball of trash that he said was symbolic of the state's homelessness crisis and failures to address it.

Newsom "and his political insiders in Sacramento have driven California into the ground," Cox said. "Vote yes to (recall Newsom) and elect a businessman with a proven track record of getting things done."

Cox is also outspoken in his opposition to mask mandates and vaccine requirements.