Inside Texas Politics: When will the pandemic be over? Three county judges weigh in, with one saying by July 4

"I think if we'll all do our part... then hopefully when we celebrate Independence Day we can celebrate independence from COVID-19," Tarrant County Glen Whitley said 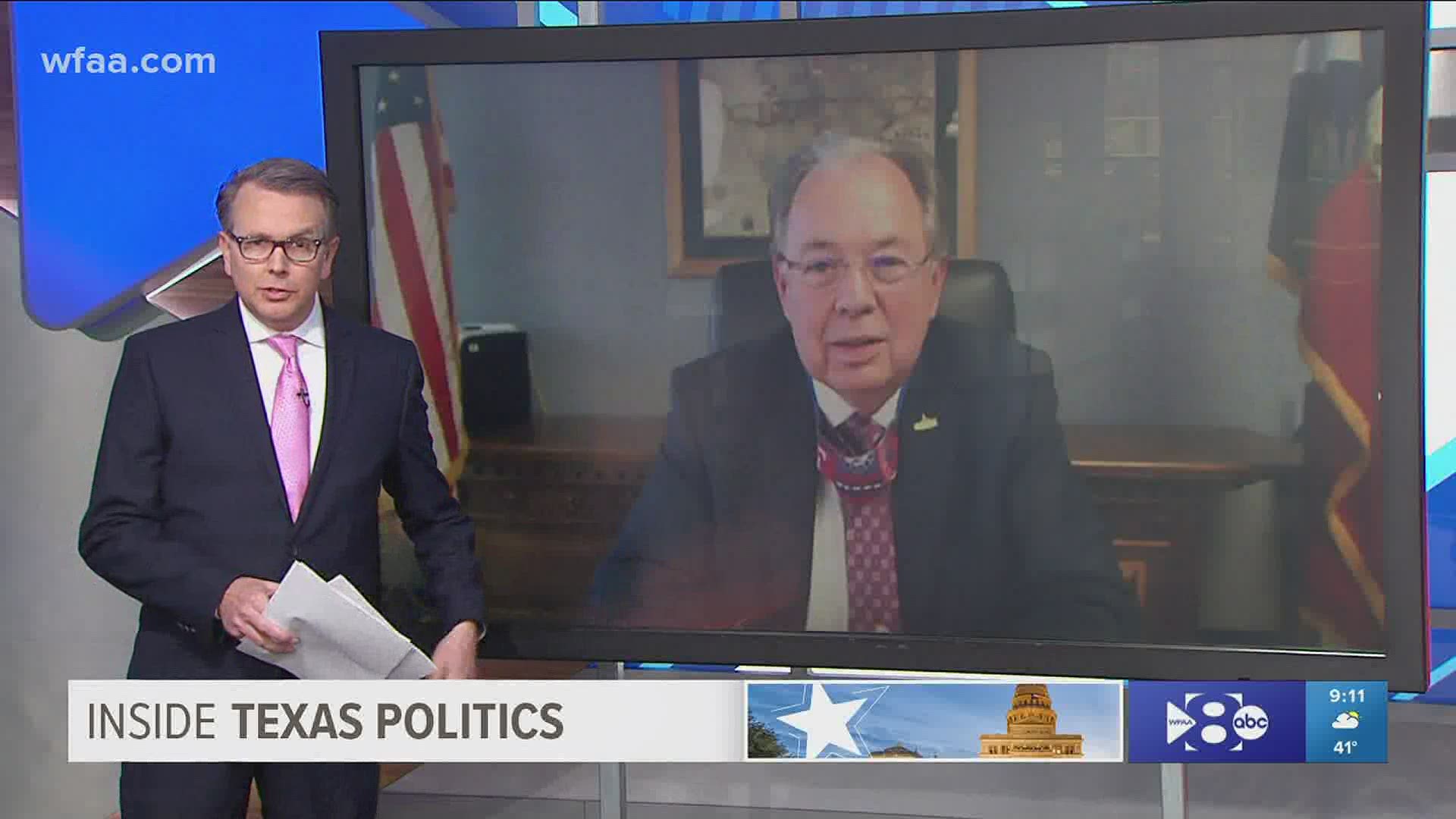 Inside Texas Politics began the new year speaking with three county judges about the challenges and opportunities the new year brings. They are the top elected officials in three of the state's biggest metro areas:

This week, Jenkins joined the program to share his outlook on the year ahead. He said he believes that by the end of 2021, the pandemic will be behind us.

"That's my hope and fervent prayer," he said.

But, Jenkins explained, it's not only the vaccines that will get help end the pandemic.

"A lot of that is going to depend on us using the two vaccines that we have at our disposal until we get the shot," he explained. "One is wear that mask when we're around other people. The other is to listen to what the doctors are telling us we need to do and use our good decisions."

He believes if Texans can follow those guidelines well as vaccine rollout occurs, the faster the pandemic will end.

"If we'll do those things, we'll knock those numbers down, and the faster we knock the numbers down and we get that vaccine out to people, those two things together will end this pandemic."

Host Jason Whitely also asked Jenkins about his legislative wish list for the upcoming year, to which he said he hopes the legislature will act to make sure all Texans have access to health care.

To learn more about the Democratic judge, click here.

Later in the program, Whitely spoke with Whitley, the Republican judge in Tarrant County who represents 2 million Texans. When asked about his outlook for 2021, this is what he shared on the pandemic.

"I think if we'll all do our part, if we'll wear the masks, if we'll wash our hands, if we'll social distance, if we'll get the vaccine when it's available, then hopefully when we celebrate Independence Day we can celebrate independence from COVID-19."

He also spoke on how he is concerned about state officials' "assault on local control," saying it is a big concern for him.

Whitley feels that local governments need to be able to govern in their own way.

"I always have strongly supported local control and advocated that elected officials really be allowed to represent the citizens at their respective levels."

To learn more about the Tarrant County judge, click here.

He has spent almost 50 years in Texas politics and represents about 2 million Texans in and around the City of San Antonio. He is a former state senator and state representative as well. Here's his view on what 2021 has in store, including the end of the pandemic.

"It's going to take a while to get there though," he explained. "It's probably going to take the first few months of 2021 to take care of all the health care workers, first responders, nursing homes, people with severe underlying health issues."

Once the pandemic ends, though, he believes the area around San Antonio will reemerge, though it may take longer than some may have previously thought.

"It's going to be awhile. As soon as the vaccine kicks in and people feel safe, then I think local residents will continue to go back to restaurants that are hurting now," he explained. "Then I think it'll take two years, maybe three years for the tourism industry to come back."

He compared the pandemic's effect on tourism to that of the 9/11 attack on airlines.

"After the 9/11 attack, it took the airlines two years to get back to where they were before the attack. This is much more devastating," Wolff said. "I believe a lot of companies are going to be reluctant to send 5,000 people and spend that much money, so it's going to take a while for the tourism industry to come back."

To learn more about the Bexar County judge, click here.

Ross Ramsey, with the Texas Tribune in Austin, joined Jason Whitely to discuss the next election cycle.

County judges will be on the ballot again in two years. Although we're almost two years away from that election, now is when people decide to become candidates. Or try for higher office.

1. The governor, lieutenant governor, and plenty of others are on the ballot in two years. Will any tough candidates challenge them?

2. One of the big questions is what will post-Trump politics look like? Does 2021 bring political compromise? Were voters sending a message by electing Biden and defeating Trump?

Ramsey joined the Fort-Worth Star-Telegram's Bud Kennedy as well as WFAA political producer Berna Dean Steptoe to discuss some of the biggest political issues to start the new year.

1. Texas lawmakers might be keen to new sources of revenue considering the devastating impact the COVID-19 pandemic had on the economy. Is there any appetite for expanding Medicaid or legalizing casinos or marijuana this time around? Lawmakers will finally be able to respond to the pandemic. There's a push for them to formally open restaurants and bars. Will that pass?

2. Texas Republicans sat in silence during the Trump administration. Will Texas now go back to constantly suing the federal government after President-elect Joe Biden is sworn in?