Rep. Michael Burgess said "this country has voted through all kinds of turmoil" in response to President Donald Trump's suggestion to delay the election. 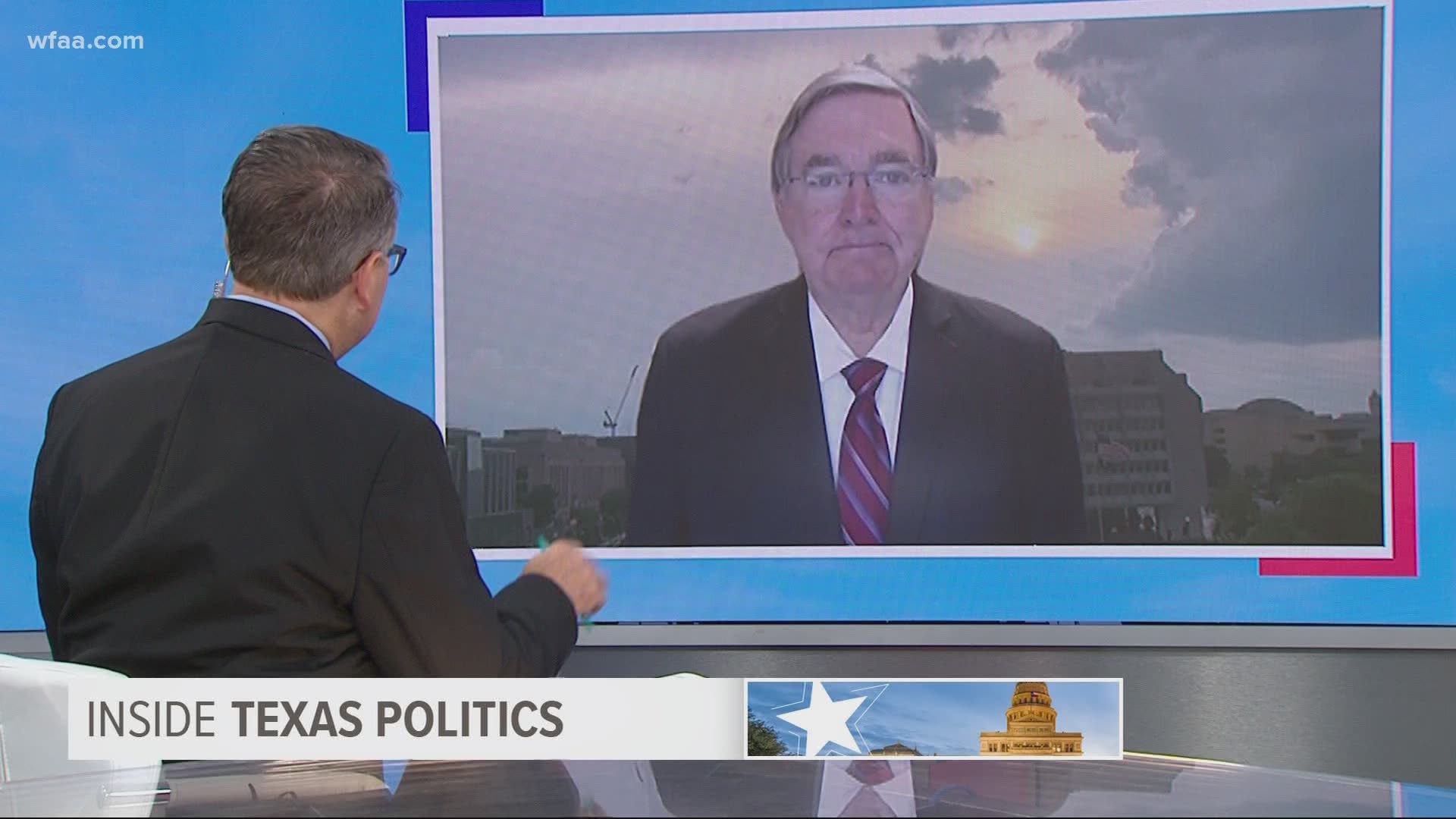 DALLAS — Add another Republican to the list of those repudiating any suggestion of delaying the November presidential election.

“This country has voted through all kinds of turmoil and trouble in the past.  The country was able to vote during the Civil War, able to vote through two world wars, a previous pandemic,” said Rep. Michael Burgess, R-Lewisville.

Burgess was joined by a number of fellow Republicans and Democrats from Texas, including Sens. John Cornyn and Ted Cruz and Reps. Eddie Bernice Johnson and Van Taylor, in saying they do not support delaying the election.

The statements came after President Donald Trump suggested in a tweet on Thursday that the election could be delayed.

With Universal Mail-In Voting (not Absentee Voting, which is good), 2020 will be the most INACCURATE & FRAUDULENT Election in history. It will be a great embarrassment to the USA. Delay the Election until people can properly, securely and safely vote???

As for the latest in negotiations on a new coronavirus stimulus package, Burgess, who represents District 26, said he has no idea when an agreement will be reached.

While he thinks both parties should be at the table negotiating right now (the U.S. Senate was in adjournment over the weekend), Burgess said the debate over COVID-19 liability shields was the major sticking point delaying an agreement.

“Leader McConnell’s been pretty straight forward about this, that he also wants to see some type of certainty in the liability arena as businesses and schools open back up. I think that is correct,” he said. “It doesn’t need to be something that is permanent. It can be something that’s temporary.”

However, Burgess said House Democrats wouldn't even consider it, which has caused the holdup.

Nearly 100 Texas mayors recently sent the Texas congressional delegation a letter asking for funds to help their budgets as they battle the COVID-19 pandemic.

But Burgess said that’s not necessary, because there’s still funding available from the March 27 stimulus bill. He estimated $50 billion remains.

“So we need to work through whatever the problems have been getting that money to where it is needed," he said. "Before simply pushing more money out the door, we need to find out why the money has not gotten to where it was intended."

He added that until the issues with distribution and funding are solved, adding additional dollars might not be of assistance.

Burgess is the most senior medical doctor in Congress. He did add money to a recent appropriations bill to research plasma extraction. Plasma donations have been proven to help transfer antibodies from people who’ve recovered from COVID-19 to those currently suffering from it.

“It is one of the things that will work when we’re talking about this whole new world of viral counter-measures while waiting on a vaccine,” Burgess said. “We probably could do a better job of that than we’re doing right now. The technique we’re using was developed back in the 1930s.” 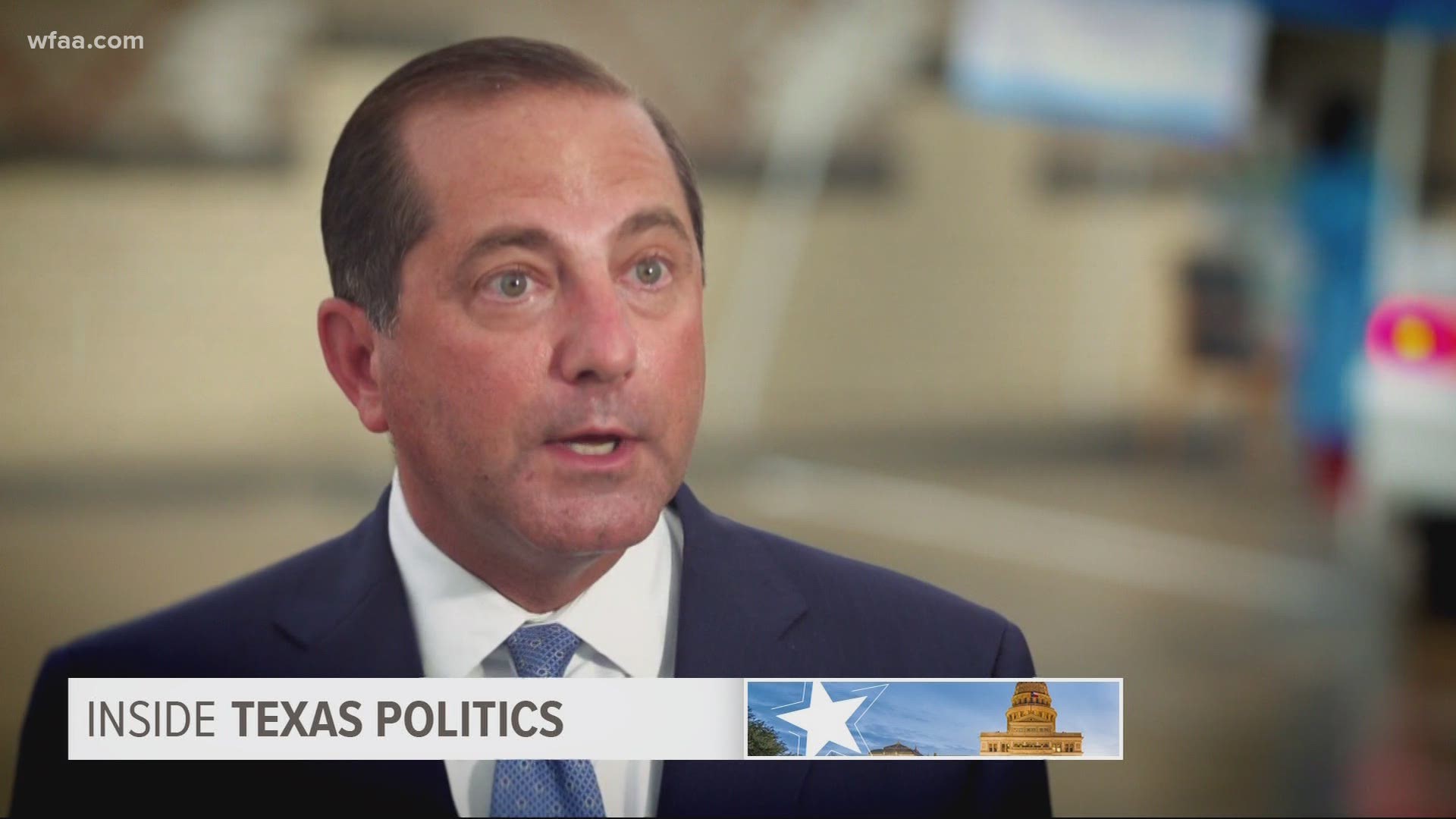 A COVID-19 vaccine could be available by the end of this year. The U.S. Secretary of Health and Human Services said it is “very credible” that we could have tens of millions of doses.

“We have made the commitment that the COVID vaccine will either be free, or certainly affordable for all Americans,” said Secretary Alex Azar.  “Cost will not be a barrier to any American having access to an approved COVID vaccine.”

Azar told Inside Texas Politics two of the five vaccines the government announced contracts or partnerships with are entering the final phase of their trials, phase III. He said it’s only taken Moderna and Pfizer four months to reach this stage— something that has never happened before.

It will be a couple of months, at least, before the public starts seeing data come in from those trials.

Under the terms of the Pfizer contract, Azar says the U.S. will acquire 100 million doses of vaccine.

Azar also continued to emphasize the importance of community mitigation factors: wearing masks, social distancing and shutting down locations where neither will happen, such as bars. 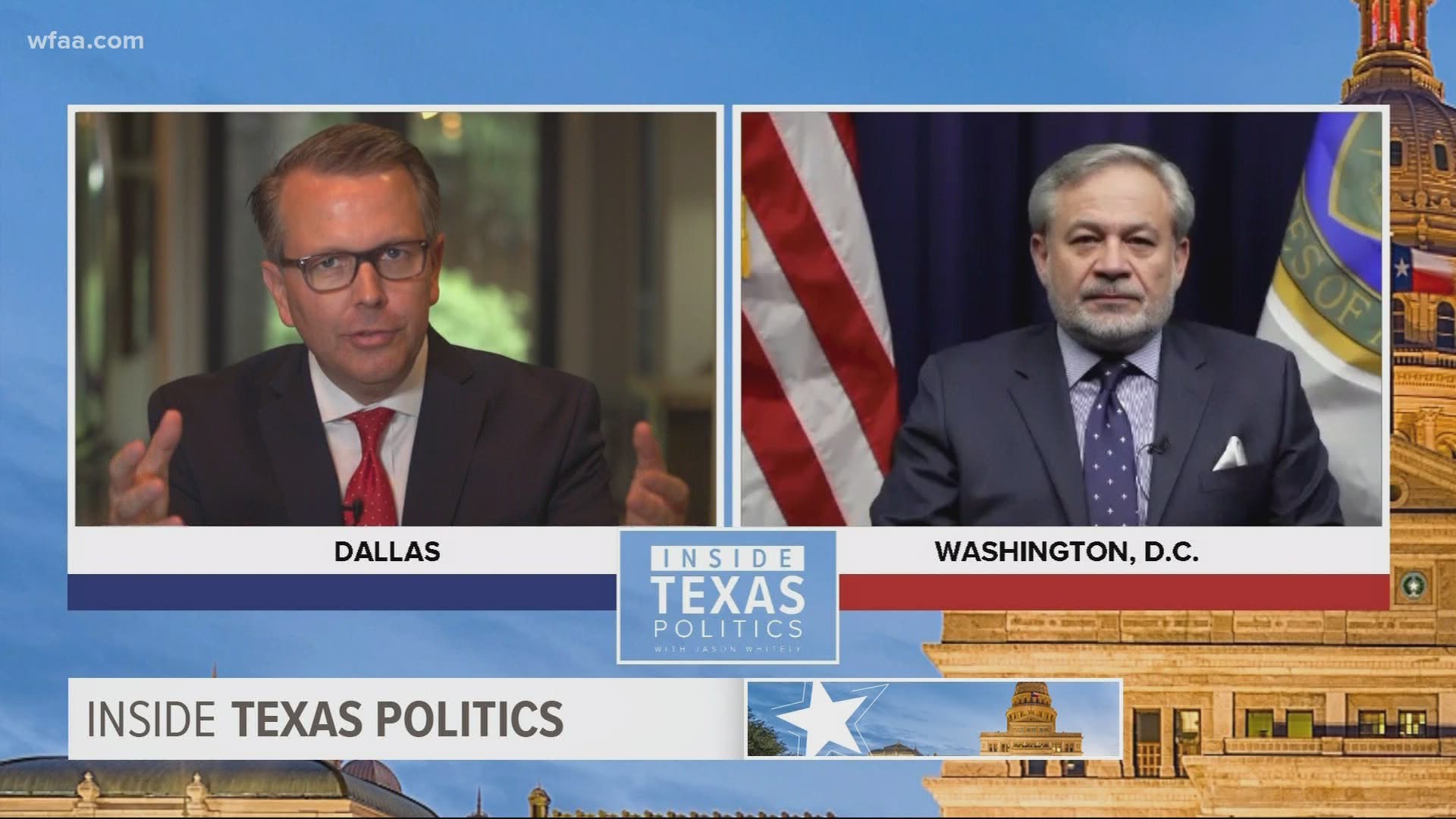 The price of oil continues to be depressed and the rig count is down dramatically in the Permian Basin.

The U.S. Secretary of Energy appeared on Inside Texas Politics to explain what the Trump administration is doing to help Texans get back to work.

“I think the plan involves an economic recovery that’s going to span the country. That’s what’s going to drive the price of oil and gas back up in America,” said Secretary Dan Brouillette.

Brouillette said there is some merger and acquisition movement in Texas and other parts of the country.  Combined with slight uptick in some levels of demand, he thinks this points to a strong economic recovery, perhaps starting as soon as the third and fourth quarters of 2020.

“We’re already seeing a pickup in the demand curves for refined products, like gasoline, some diesel. Also some jet fuel as people are beginning to travel a little bit more than they have over the course of the last few weeks and months," said Brouillette. "So that’s going to drive some of this increased production.”

The U.S. is also renting out space at the Strategic Petroleum Reserve.

Brouillette said the government made this decision after demand fell off a cliff earlier this year. But production continued for a period of time, which led to a severe shortage of storage space for all of the oil being produced but not consumed.

He said as part of the ongoing program, the U.S. is storing millions of barrels of oil in Louisiana and Texas.

“But also as part of this program, Australia, a very close ally to the United States, asked for permission to store some oil in the strategic reserve as well. We did a deal with them by which they purchased American oil to store in our reserve. And we’re going to do the same thing with India shortly,” Brouillette said.