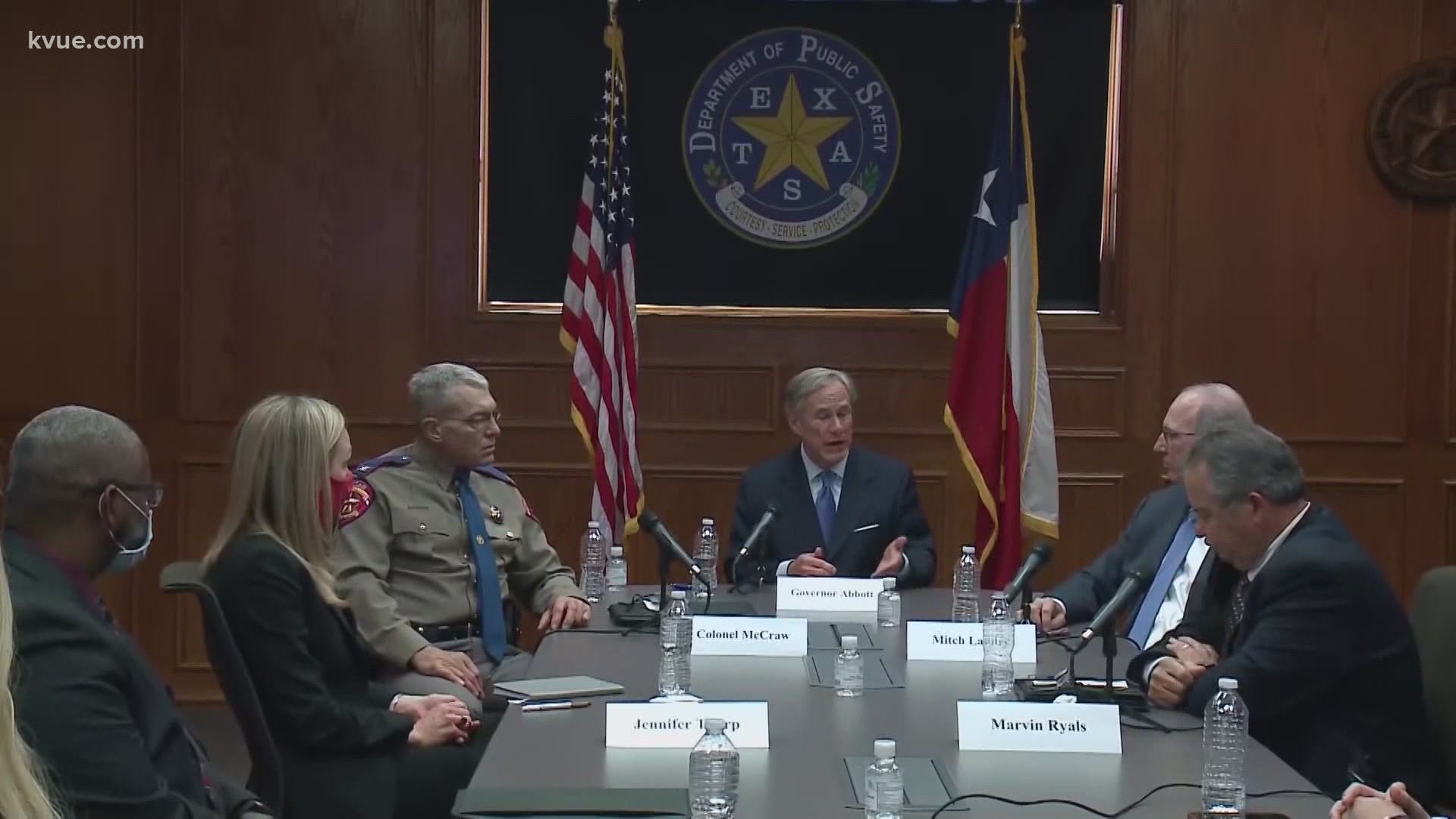 (Texas Tribune) The Texas Senate passed a bill Tuesday that would prevent local governments from cutting their law enforcement budgets without voter approval.

It was the Legislature’s most substantial move yet in a political war over police funding in Texas that was sparked last summer. The in-custody death of George Floyd in Minneapolis and fatal police shooting of Mike Ramos in Austin prompted protests against police brutality and racial injustice and strengthened calls to change policing practices, ultimately leading the city of Austin to cut its police budget.

Senate Bill 23, authored by state Sen. Joan Huffman, R-Houston, would require cities or counties to hold an election before reducing police funding. Senators approved the legislation on a 28-2 vote with broad bipartisan support, despite numerous Democrats harshly criticizing the legislation as a political ploy.

“This sends a message to the citizens that we are going to back the blue,” Huffman said on the Senate floor. “That’s what this bill intends to do.”

The measure will now be sent to the more moderate — but still Republican-led — House, where its future is less certain.

Republican Gov. Greg Abbott has loudly supported legislation this year to stop cities from “defunding the police.” The phrase has become increasingly politicized in the last year, though its meaning can vary from shifting some city responsibilities away from police officers to complete abolition of policing.

Police reform advocates have opposed such bills filed in reaction to Austin’s budget decision. They argue that it would take away local government control and force costly elections. Many Democrats, including those that voted for SB 23 Tuesday, have also argued that cities aren’t seeking to “defund” police, but to rethink the role of police officers, taking steps to instead hire civilians to respond to mental health crises or enforce traffic violations.

“We do not support defunding the police, but we do believe in collaborative policing and giving local governments the ability to make the decision that is best for their community,” state Rep. Nicole Collier, a Fort Worth Democrat and chair of the Texas Legislative Black Caucus, said last week.

For some Black activists and organizers, measures on police funding stem from a political perception that wrongfully equates calls for police accountability and reform as an attack against law enforcement. Chas Moore, who leads the Austin Justice Coalition, wants politicians to learn that public safety doesn’t belong just to police, and that Black and Hispanic Texans often don’t feel safe in their communities.

“When it comes to standing up for the thousands if not millions of Texans who spoke out, protested, rallied in the streets at some point in 2020 or picking the billions of billions of dollars going into police budgets and the status quo, nine times out of 10 they’re going to pick [police],” Moore said.

In the Senate, Democrats said the bill backed them into a corner and would paint them as anti-police if they voted no. State Sen. John Whitmire, D-Houston, said the bill was a political message that would ultimately “micromanage city councils and county commissioners.”

“If the Democrats in Washington attempted to do that to us, the majority of this body would be screaming,” he said.

In Austin, the police department’s total funds were slashed by a third last year, but only about 7%, or $31 million, was cut immediately and instead put toward other public services, like housing and mental health. The rest of the money was put into transitionary funds to shift some police duties into civilian city jobs and evaluate if more responsibilities could be transferred in the future. Since then, the City Council has moved the city’s crime lab, along with its funds, out of the police department.

Such shifts would not be allowed in the future without an election under Huffman’s bill, as was noted by Austin Democrat state Sen. Sarah Eckhardt on the floor.

Austin’s immediate cuts were largely made by eliminating vacant positions, cutting some overtime funds and delaying new cadet classes, which were already on hold while the city awaited audits that have since reported “significant racial and gender disparities” in Austin police training. Still, the action prompted outcry from police leaders and union officials, who pointed to fast-rising homicide rates throughout the state and country as a reason to maintain police funding levels.

The message of “defunding the police” struck a nerve with Texas Republicans. Abbott, who, without mentioning specifics, told Floyd’s family in Houston last summer that he was committed to reform and suggested a potential George Floyd Act, suddenly turned away from discussions on reforming police behavior and accountability and instead became laser-focused on Austin’s budget and “backing the blue.”

“Texas is a law-and-order state, and we are going to ensure that we keep it that way,” Abbott said after meeting with law enforcement groups at the beginning of the legislative session in January.

Though there are many bills addressing police funding this session, House Bill 1900 and SB 23 have gained the most attention.

“This bill is moving through the Legislature more quickly than other bills, which makes us extremely concerned about it,” said Nick Hudson, a policy and advocacy strategist with the American Civil Liberties Union of Texas.

SB 23 would require a local election if a Texas city or county wanted to cut a law enforcement agency’s share of the locality’s budget from the previous year, lower the number of officers, or reduce funds per officer for training and recruitment. The bill focuses largely on a law enforcement agency’s percentage of the budget, so that if a city faced a budget shortfall, funds could dip in line with the city or county overall.

“If the jurisdiction has a difficult fiscal year and is forced to cut its entire budget by 10%, it can cut the law enforcement budget by up to 10% in that scenario, but it can not cut it anymore than that unless the voter’s approve,” Huffman said in a March committee hearing.

If the state determines that a city or county did cut a law enforcement budget without voter approval, the local government will be prohibited from raising property taxes the next year.

One of Texas’ largest police unions said during the committee hearing that an election could have prevented Austin officials from quickly reacting “when the masses made a run on City Hall and made a call for the defunding of the police.”

“We don’t believe that the opinion of the entire community was reflected in those comments and protests,” said Chris Jones with the Combined Law Enforcement Associations of Texas.

Not all law enforcement supports the measure, though. While Austin’s police chief at the time of the budget decision last year spoke out harshly against the cut, the new acting chief, Joseph Chacon, called SB 23 “an overstep by the legislature.” He explained in a written statement to senators that the department has needed to make funding changes to improve the quality of the service, citing the crime lab’s recent move out of police control and money that has been reallocated for mental health responders.

“We believe that there may be times that a designated priority may need additional funding over that of the police department and which can be reallocated from the police without negatively impacting police services,” Chacon said. “That is what we did in the latest budget cycle.”

Leaders in Texas’ biggest cities, most of which increased police funding for this fiscal year, have also criticized attempts to punish potential budget decreases, arguing that the people elected by the city’s residents should be the only ones making those decisions, not statewide officials.

“We have over 40 town hall meetings, public hearings and conversations with our residents over our entire budget. And that includes the detailed line items in the police budget,” said Dallas City Council member Lee Kleinman. “Most importantly, we have an election every two years when they elect the council members to represent their districts. So if people are not supportive of the direction the council is taking the city, they can vote those council members out.”

Unlike other police funding bills, Huffman has celebrated her bill since it puts the question to voters instead of prohibiting or punishing funding decreases outright. In the House, HB 1900 would allow residents of an area to de-annex from their city if it cuts police funding and punish cities by freezing property tax revenue, delaying sales tax payments and preventing increases in utilities to compensate. Another bill, House Bill 1950, proposed creating areas that would be taken out of the local police department’s control, and put in charge of a board designated by the governor.

Both House bills have been approved by a committee but have not yet gone before the full chamber.

After hearing dissent and accusations of the bill being a political move for more than an hour, Huffman shot back Tuesday that her bill was to support law enforcement, not to play politics. Before calling the very supportive vote, the lieutenant governor made a final statement.

“The city of Austin is the reason this bill is passing,” he said. “Not to send a message, not to be political, but to be sure there’s not another Austin.”

This article originally appeared in The Texas Tribune.

VERIFY: Texas is not 'very close' to herd immunity from COVID-19