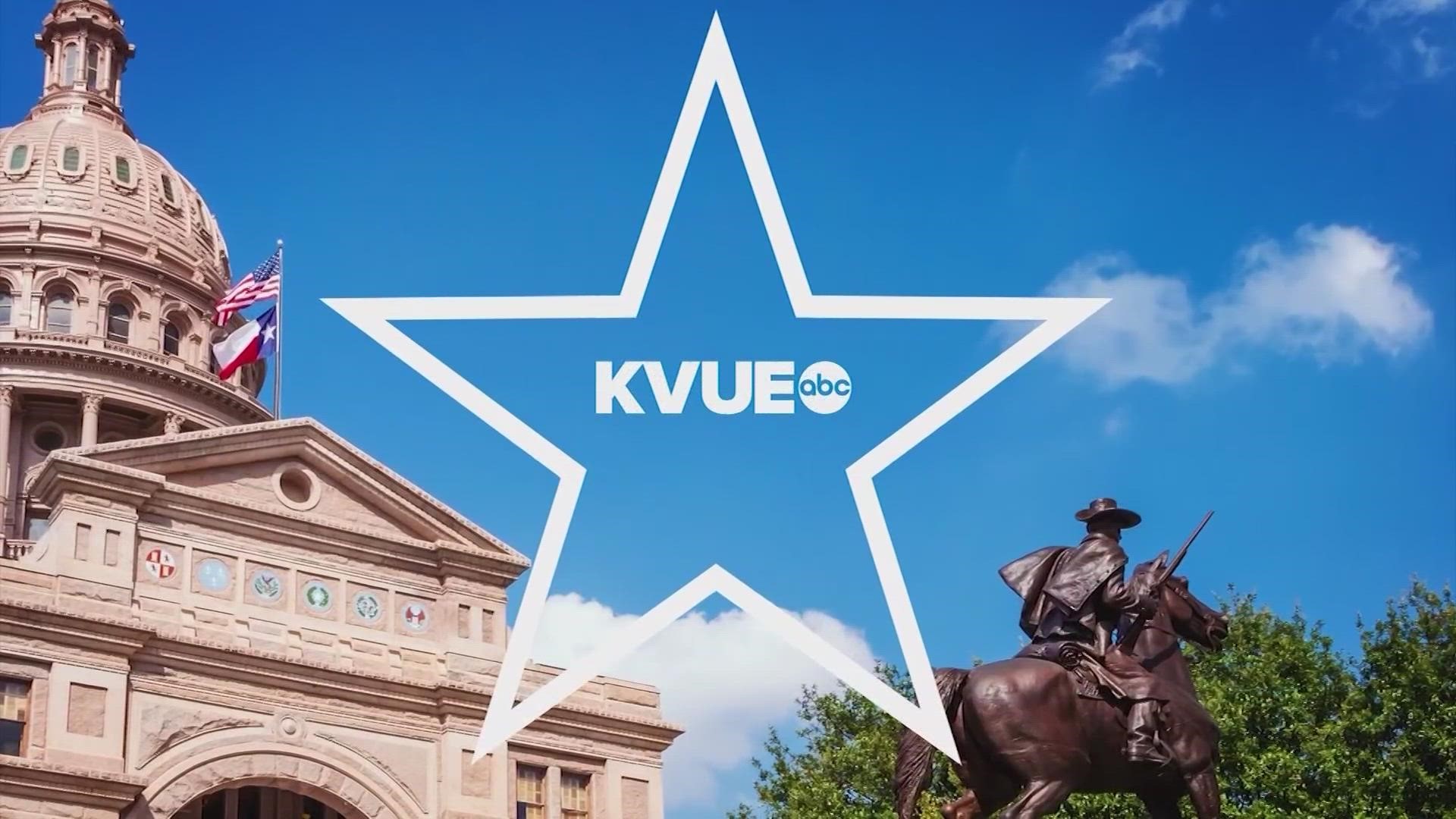 AUSTIN, Texas — In this edition of Texas This Week, we recap a contentious week in the Lone Star State, with school districts, cities and counties bucking against the governor, ending in court. Also this week, the speaker of the Texas House of Representatives called in law enforcement to get Democrats back to the Capitol. State Sen. Carol Alvarado (D-Houston) talked to KVUE about why she decided to filibuster Senate Bill 1.

Leaders of Texas school districts, county judges, mayors and city councils are banding together to push back against Gov. Greg Abbott and his latest executive order that bans local entities from implementing policies to try to slow the spread of the contagious delta variant of COVID-19. Despite the governor's order, the largest counties in Texas, and many others, are requiring face masks in schools as the number of COVID-19 cases, hospitalizations and patients in intensive care units soar.

Gov. Abbott and Attorney General Ken Paxton are vowing to fight the mandates, but the local leaders are not backing down.

The Texas Supreme Court issued its opinion on Gov. Greg Abbott's veto that cut all funding to the legislative branch of government. The all-Republican justices did not overturn the action as Democrats and legislative staffers asked, but rather declined to settle the dispute.

Gov. Abbott defunded the legislature after the House Democrats broke quorum on the last day of the regular session, killing two of his priority bills. Many say the veto was a strategic move by the governor to keep the Democrats in Austin for a special session to pass his priority bills. It didn't work. The Democrats went to Washington, D.C., to lobby for federal voting rights legislation and asked the Texas Supreme Court to weigh in on the veto before funding to pay the salaries and benefits of about 2,100 state employees runs out on Sept. 1.

The governor then called a second special session and he, along with Lt. Gov. Dan Patrick and Speaker of the House Dade Phelan (R-Beaumont), extended funding for the staffers until the end of September. The justices wrote this dispute has become a fight between the members of one branch of government, not between the branches themselves, and because the funding was extended and lawmakers have the opportunity to restore the funding, they're not getting into it.

This week, some of the Democrats who broke quorum returned to the Texas House of Representatives for the second special session, but not enough to reach a quorum. On Monday, there were 95 members on the floor, five short of the two-thirds needed to take any action. The Representatives voted to issue a call of the House, locking the doors of the chamber to try to secure a quorum, and sent the sergeant at arms to find the missing Democrats and bring them back.

The next day, Phelan issued civil arrest warrants for the absent members – a move that doesn't result in arrest but an escort back to the Capitol. That led to quite the back-and-forth between district courts and the Texas Supreme Court about if the lawmakers can be arrested. After the Texas chief justices said yes, the speaker deputized law enforcement officers on Thursday to immediately start bringing the Democrats in. Officers were spotted at the homes of some members, but as of now, no lawmakers have been taken back to the Capitol.

All the fighting and quorum-breaking stems from the election reform bills Republican lawmakers want to pass, Senate Bill 1 and House Bill 3. They say the bills make it easier to vote and harder to cheat, but Democrats and others argue the bill will suppress voters, especially the disabled, elderly and voters of color.

The Democrats who traveled to Washington to lobby for voting rights bills that would supersede the Texas legislation saw some hope this week. One of the bills made it to the U.S. Senate floor, but U.S. Sen. Ted Cruz (R-Texas) filibustered the bill.

Meanwhile, the Texas Senate passed the upper chamber's version of the election reform bill this week along party lines – but not without a fight. On Wednesday afternoon, State Sen. Carol Alvarado launched a 15-hour filibuster to draw attention to the bill. She joined KVUE a few hours after leaving the Senate floor to talk about her effort.

Ashley Goudeau: You made the decision to filibuster this bill, well aware that at the time there were 25 days left in the special session and you obviously we're not going to be able to filibuster for 25 days. So why did you filibuster?

State Sen. Carol Alvarado: "I think there's a lot of momentum going on with our fight against this voter suppression bill. I'm very happy with my colleagues in the House. They are obviously putting everything on the line. They have been doing that. And so it's one of those deals where you have to strike while the iron is hot, while there's attention and focus on the issue, and the filibuster is not always used to kill a bill. I mean, there have been 106 filibusters in the Texas Senate, but yet a very small percentage of those were actually used to kill a bill. Filibusters have also been used to put the brakes on an issue and shine a light on the bill. And that's what we wanted to do, was to shine a very big light, a nationwide spotlight, on the bill and point out some of the things that we feel are harmful to people that are disabled, to our senior citizens and to our Latinos, African Americans and Asian communities."

Goudeau: I want you to talk to us about how you prepared both mentally and physically to filibuster, because it takes a lot of endurance.

Alvarado: "It does, and thank goodness that I'm in pretty decent shape. I think having good stamina is key. So, being healthy and being in shape, that also helps. But you, you have to really be mentally prepared. You have to believe in what you're doing and want to do this because it's, it's physically enduring, but it's also mentally enduring because it's exhausting. During the hours of, you know, maybe 2 a.m. to 6 a.m. were tough, because there's nobody – with the pandemic people aren't really coming to the Capitol. When Wendy Davis did hers, there was a gallery full of people and a lot of momentum. And this was done late at night, wee hours of the morning with really, you know, very few people in the gallery. So you're not going off of the momentum that's there. But the momentum that I was feeling were the emails and messages that we were getting on social media because we asked people to look at the bill and send us their stories, how the bill would impact them and their families, and the stories were inspiring, heartfelt, and gave me a lot of momentum and energy, especially the stories from people who are disabled and suffer from illnesses that make it a challenge to meet some of the requirements in the bill dealing with signatures."

Goudeau: I saw a picture of your tennis shoes that you posted on Twitter. I read something about a back brace. Talk to us about what you physically had to be prepared to do this.

🚨BREAKING: Moments ago I submitted my intention to filibuster TX’s #VoterSuppression bill #SB1.🗳

📢SPEAK UP! How will this bill affect you, your loved ones or your #Texas community?

Alvarado: "Oh yeah, I had a back brace, which is something I recall Wendy Davis having. I have back issues to begin with, but obviously standing up for that long, you're going to feel it in your back or in your legs, and I recall that they dinged her. You get, after the second ding, I think you have to stop or maybe I think you get three strikes like baseball. But she had somebody helping her put the brace, and that counted as far as a strike against her. So I had mine out and handy, and I knew the only time I could get it on was when a colleague was asking questions. So I had that. And of course, you can't go to the bathroom, you can't drink water, you can't lean on your desk, lean on your chair. So, you know, having a catheter device, that is definitely a necessity because you just you can't go that long without it."

Goudeau: Was there a point before 8:55 Thursday morning that you thought about stopping? And if so, what kept you going?

Goudeau: You didn't even think about stopping?

Alvarado: "No. Once I got to 10 hours, that was kind of my threshold. Let me just, let's see if I can get to 10 hours, and then once I got to 10, all right, let me see if can I get to 12, and then after that, well, 15 sounds like a great number and 9 sounds like a pretty good hour. So, and by that time, members were coming back on the floor because we were in at 9, so Sen. John Whitmire got reengaged with me and kind of got me a little fired up. So that gave me some momentum. I think he came down, I don't know, maybe around 6:30 or so, and just knowing that our message was getting out there, that people were really paying attention to the details of this bill – and that's the beauty of the filibuster, all you have is time, so you've got to find some things to read, to talk about. And at several times, specifically with Sen. Gutierrez and Sen. Eckhardt, we really went through page by page, line by line of the bill and dissected it and kind of got reacquainted with the bill and picked up a few things that maybe we didn't see before. But the issues that seniors and the disabled will face if this bill passes are what motivated me most, and then the issue with the poll watchers, partisan poll watchers, that are empowered, that give them a lot of flexibility to do things that they would otherwise not have, and I think it makes for a potentially confrontational environment at the polling place. I think it adds pressure to our election officials that are there on the ground greeting the voters and processing them when they come in. It gives a lot of power to poll watchers."

Goudeau: The bill passed Thursday morning. This is the fourth time this bill was passed out of the Senate. The governor has said he will call special session after special session until this becomes law. How are you going to keep fighting this?

Alvarado: "Well, we will continue to talk about the provisions that we think suppress people's right to vote, and we know that we'll also end up in court, as many things do when it comes to elections and voting and redistricting in Texas. It's nothing new, we'll be at it again. And we also want to send a message to other states, other legislative bodies, that are facing the same challenges that you don't just have to roll over and take it. You can use every resource you have to fight it, and in that fight, what you're doing is educating the voters, and voters will remember this come 2022 elections. So, you know, it's summer, but we hope that through these efforts, people will take a second look at this bill and be able to realize the impacts that it will have."

In this week's edition of The Last Word, I weigh in on the response of elected officials to the pandemic and calls on Texans to lead by example.

More than 300 killed in 7.2 magnitude earthquake in Haiti

Afghan president flees the country as Taliban move on Kabul