The Baker Hotel: Will the heart of Mineral Wells beat again? 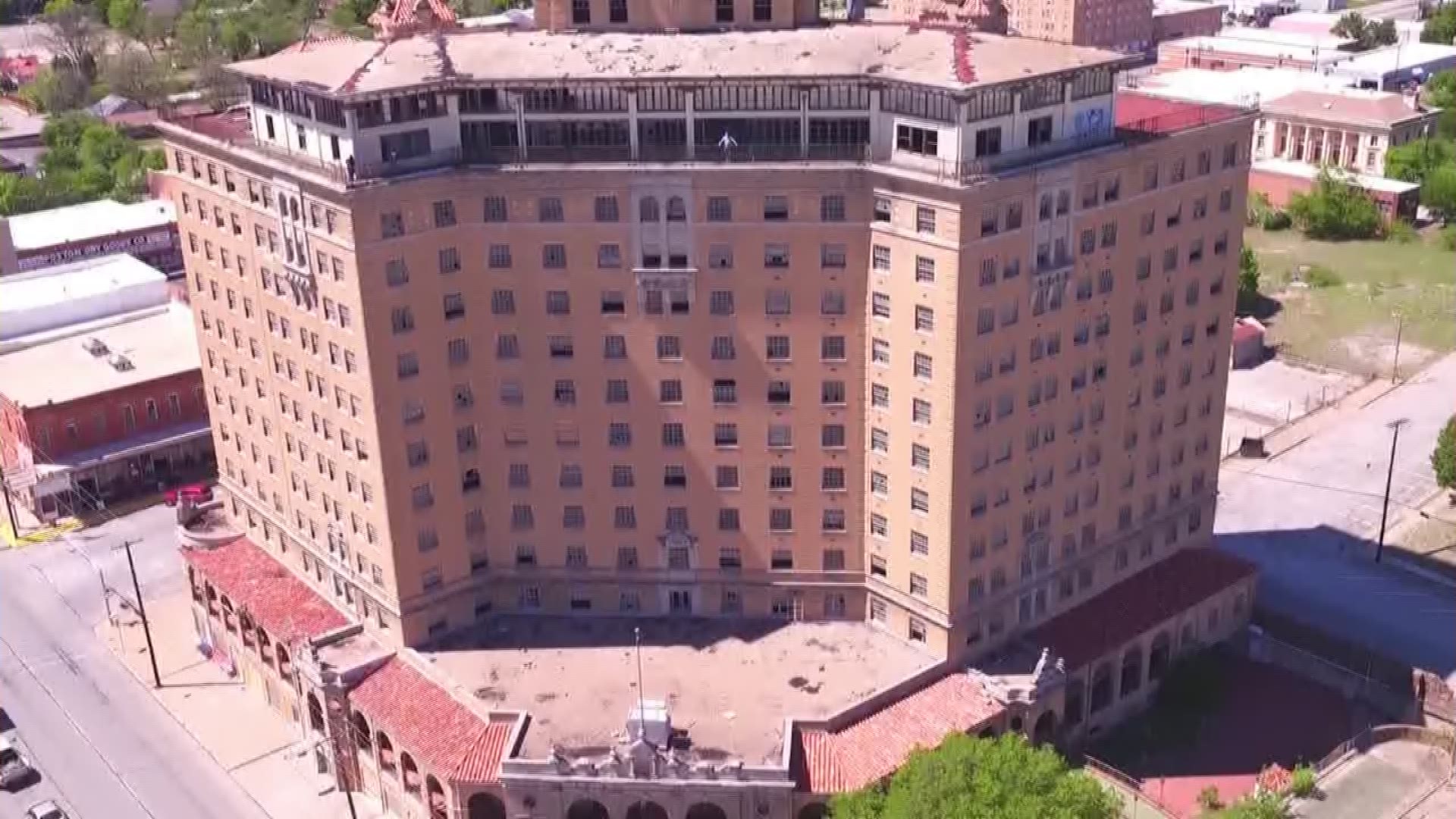 "It was such a grand hotel at one time. It brought a lot of people here,” said coffee shop owner Bryan Marsh whose business sits just across the street from the 14-floor “Grand Old Lady” of Mineral Wells that has towered over the town of 16,000 people for more than 88 years. A hotel so grand, just the thought of her glory days drove Marsh to tears.

"Oh joy, sheer joy,” he said at the mere mention of it reopening someday. “This town as struggled for so long.”

The Baker opened in 1929. It was a magnet for the rich and famous, the tired and weary, longing for the comfort of the baths, the steam, and the wonders of the magical "crazy water" that gave Mineral Wells its name. But she's been boarded up, abandoned, since 1972. Neglect, vandals, water, and time are slowly destroying any grandeur the old lady might have left.

"She has a certain allure to her,” said Mineral Wells mayor Mike Allen. We spoke with the mayor in what used to be the grand lobby.  Leaks in the roof slowly spill plaster onto the floor. Vandals, over the course of decades armed with spray cans, hammers, and disrespect, have reached nearly every corner.

"It troubles me every time I walk in that to see how much more it's decomposed and been abused,” said Allen. "Sad. Almost depressed. I mean, the majesty's gone. It's just waiting for help."

That help did arrive several years ago. A team of investors created a template for the Baker’s rebirth.  The initial goal is to reduce the Baker’s 400 rooms down to 157, investing millions to rebuild it as the spa and business and convention destination it once was.

"This building has such rich history and almost a cult like following throughout Texas and beyond,” said developer Laird Fairchild while standing on the top floor, the Cloud Room, where band leaders like Guy Lombardo provided the music and where the likes of Will Rogers held court as audiences and dancers took in sweeping views of the Texas countryside.

“This was the place to be seen,” Fairchild said. "This is really the heart of Mineral Wells. And Mineral Wells' entire future is resting on the renovation of this hotel."

But nearly half of the estimated $60 million needed to restore the Baker, according to the plan created by Fairchild and his group of developers, relies on a federal government program.

They have been trying to get the project approved as an EB-5 investment project. Created in 1990, the program is meant to stimulate the U.S. economy “through job creation and capital investment by foreign investors.”  Investors can apply for a U.S. green card if they are willing to provide a “minimum qualifying investment” of $500,000 in a high-unemployment or rural area.

The Baker team, using the EB-5 program and its possibilities as part of their rebuilding and reconstruction budget, applied to be approved as an EB-5 project expecting an answer within 3 to 6 months.  So far it's been nearly two years with no answer from U.S. Citizenship and Immigration Services. They, and a crumbling hotel, are still waiting.

"We're at a fork in the road,” said Fairchild. “This community and these citizens are certainly counting on EB-5 for this project."

"I think we are at a tipping point, that something needs to happen with this building one way or the other,” said Mineral Wells City Manager Lance Howerton. “And obviously we would like to see it put back into productive use."

"We're basically in purgatory, if you will, at this point,” said Howerton. “We don't know which direction we're headed. Is this critical and crucial at the moment,” he said. “My personal opinion is yes it is.”

The people of Mineral Wells have agreed to do their part, agreeing to a sales tax that would provide the first $4 million the rebuilding budget needs. They held a celebration in front of the Baker two years ago when the sales tax was overwhelmingly approved by upwards of 96 percent of the city.

"We still hold out great hope that this can happen,” said Mayor Allen. "It would change the whole attitude of the community. It will give them hope again."

"Once you get here she gets her claws in you,” Allen said, “it's hard to walk away.

As for that coffee shop across the street, You Maka Me Hot coffee to be exact, the one with the hotel's original china and some of its "crazy water" on display, Laura Marsh’s hopes are high.

And her husband Bryan, hopes it happens for one more reason. His grandparents first met  in the coffee shop at the Baker Hotel. It's where he played in the hotel swimming pool as a child. To him this isn’t just an old crumbling building. This is personal.

"It would so be so nice to see that thing lit up, lit up at night with all its grandeur and see people walking and eating on the veranda again as I remember as a kid."

“It would mean that much,” I asked him.

"Yes, it would,” he replied as a tear rolled down his face. “More than I can say.”

And so, the long wait drags on, through tears and time. But with hope not yet lost, that the heart of Mineral Wells, can somehow beat again.