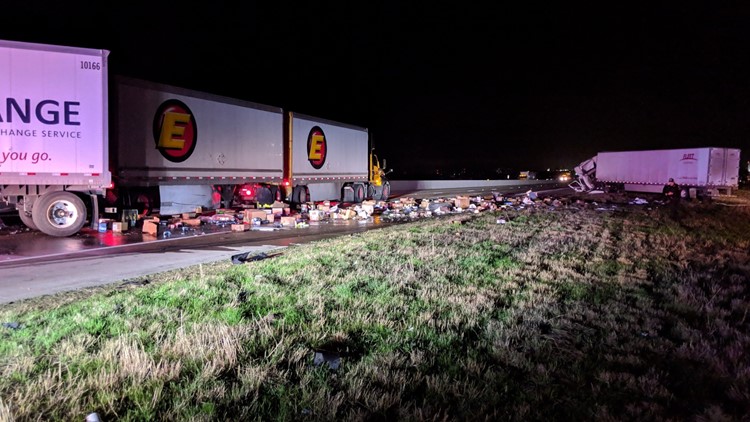 Photo by: Foster Davey
Products are seen spread across Interstate 35 near Exit 311 where 3 semi-trailer trucks were involved in an accident before 3 a.m. Thursday, Feb. 14.

TROY, Texas — One driver was killed and two others are hospitalized with non-life threatening injuries after three semi-trailer trucks crashed on I-35 early Thursday morning, according to Troy Volunteer Fire Department Safety Officer Hal Pagel.

The wreck was reported around 3 a.m.

According to the Texas Department of Public Safety, a tractor trailer traveling south slowed down unexpectedly for an unknown reason, causing the two tractor trailers behind it to slow down too. The 18-wheeler in the back couldn't avoid the collision, causing all three vehicles to crash.

The driver of the last vehicle was 34-year-old John Davis, from Selma. He was pronounced dead at the scene, and based on a Texas DPS investigation, he wasn't wearing his seatbelt at the time of the crash.

The driver of the first vehicle was 52-year-old Robert Sillemon of Mesquite, and he was taken to Baylor Scott & White Hospital for treatment of non-life threatening injuries.

The driver of the second vehicle was 47-year-old Christopher Humbert from Troy, and he was also taken to Baylor Scott & White for non-life threatening injuries.

About a mile of the southbound lanes on I-35 near exit 311 was closed as crews cleared the scene, Pagel said. Some loads from the trucks spilled on the roadway.

Authorities directed traffic to the frontage road to avoid the area. Pagel advised drivers to take Highway 317 or US 77 as an alternate route.

There is no estimated time for when the lanes will reopen, but Pagel said it may take a couple of hours.