VERIFY: No, a Mexican 'Doomsday' Virus isn't sweeping across the US

It's a scary claim getting spread around online, but there's no reason to worry about the fake 'Mexican Blood Flu.' 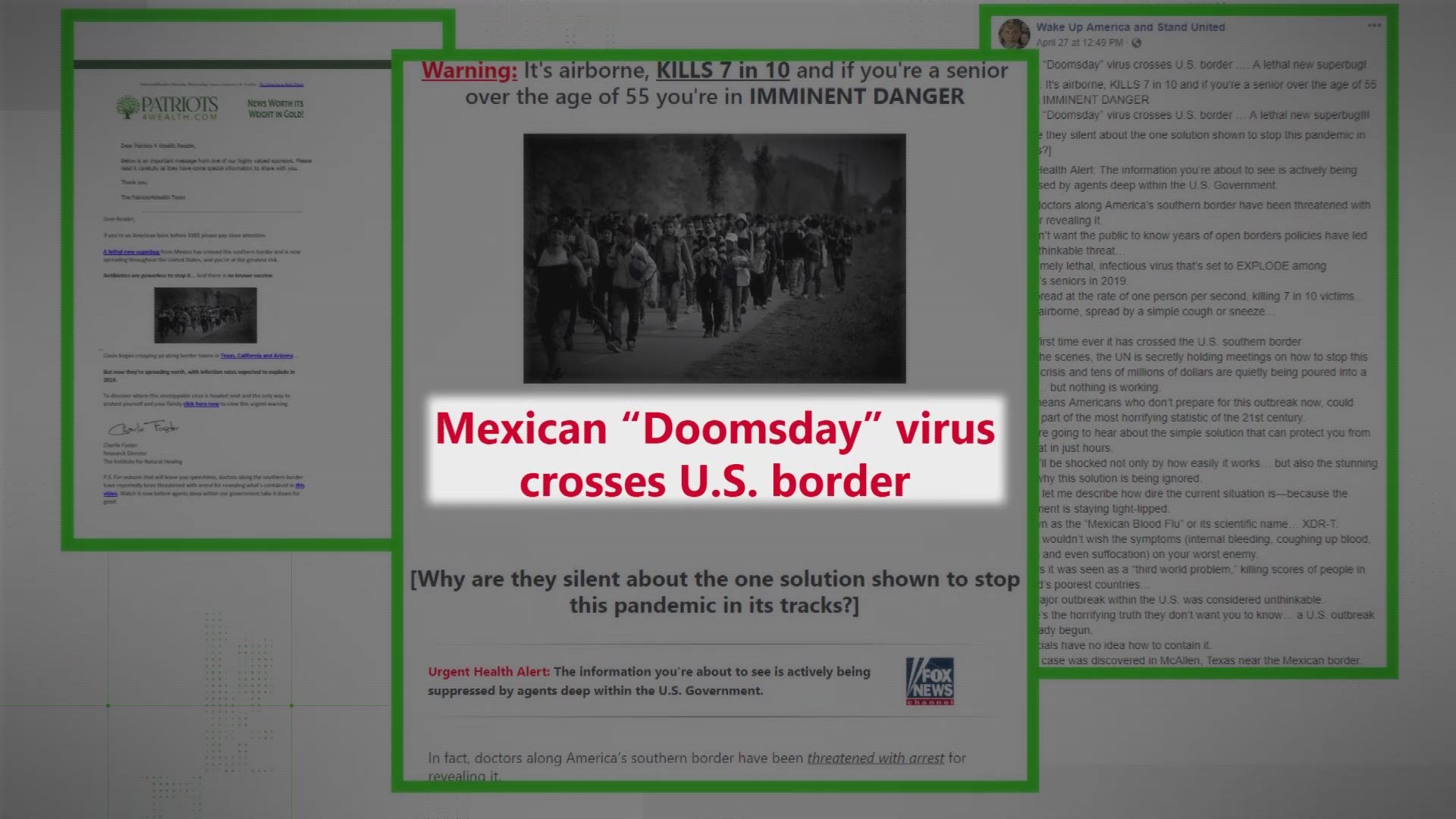 An email, a Facebook thread, and a website are all spreading the same false claim right now: That a Mexican “Doomsday” virus has crossed the U.S. border.

One reason why the message could be spreading so quickly is that it certainly sounds alarming.

The claims tell the story of an immigrant from Mexico who crossed the U.S. border last month and brought the “Mexican Blood Flu.”

According to these posts, the virus spreads in the air and can be fatal in up to 70% of people who contract it. They even claim it’s particularly dangerous to people older than 55.

To top off the claims, the posts all say this information is being suppressed by the government.

Is this real? Is there really a super virus from Mexico that is drug-resistant, highly fatal and targeting people older than 55?

No. The “Mexican Blood Flu” in the claims is totally made up. While the posts cite “experts” and “research,” there’s no real evidence that any of their allegations are true. Every post ends with a link to a store to buy the “cure” to the virus.

Put simply: This is a sales pitch that is creating fear around a fake emergency to try and get you to spend  $74 on their book of “cures”.

The posts call the virus the “Mexican blood flu.” They say its scientific name is XDR-T.

Yeah, that’s not a real virus.

XDR-TB is real. But it’s not a “blood flu.” It’s a gnarly strain of tuberculosis that has existed in the U.S. since 1993. The CDC identifies it as incredibly drug resistant, but that’s the only thing in common with the virus in these false claims. It’s not new to the U.S., doesn't target any age groups and didn’t come from Mexico.

The posts said all modern antibiotics fail against “XDR-T.”

VERIFY reached out to the CDC about this supposed “Mexican Blood Flu.”

A spokesperson wrote in an email that “We have nothing on a Mexican blood flu, if we did it would show up under new viruses in FluView.”

And, all of the false claims link to a website where people are encouraged to buy a $74.00 subscription to books and documents by the “Institute for Natural Healing.”

They claim to have cures for the "Mexican Blood Flu" and other maladies in the pages of their publications.

So we are verifying this claim in all its forms is FALSE.