With the NCAA Tournament bubbles now popped, it's worth remembering what those inside went through to crown national champions. 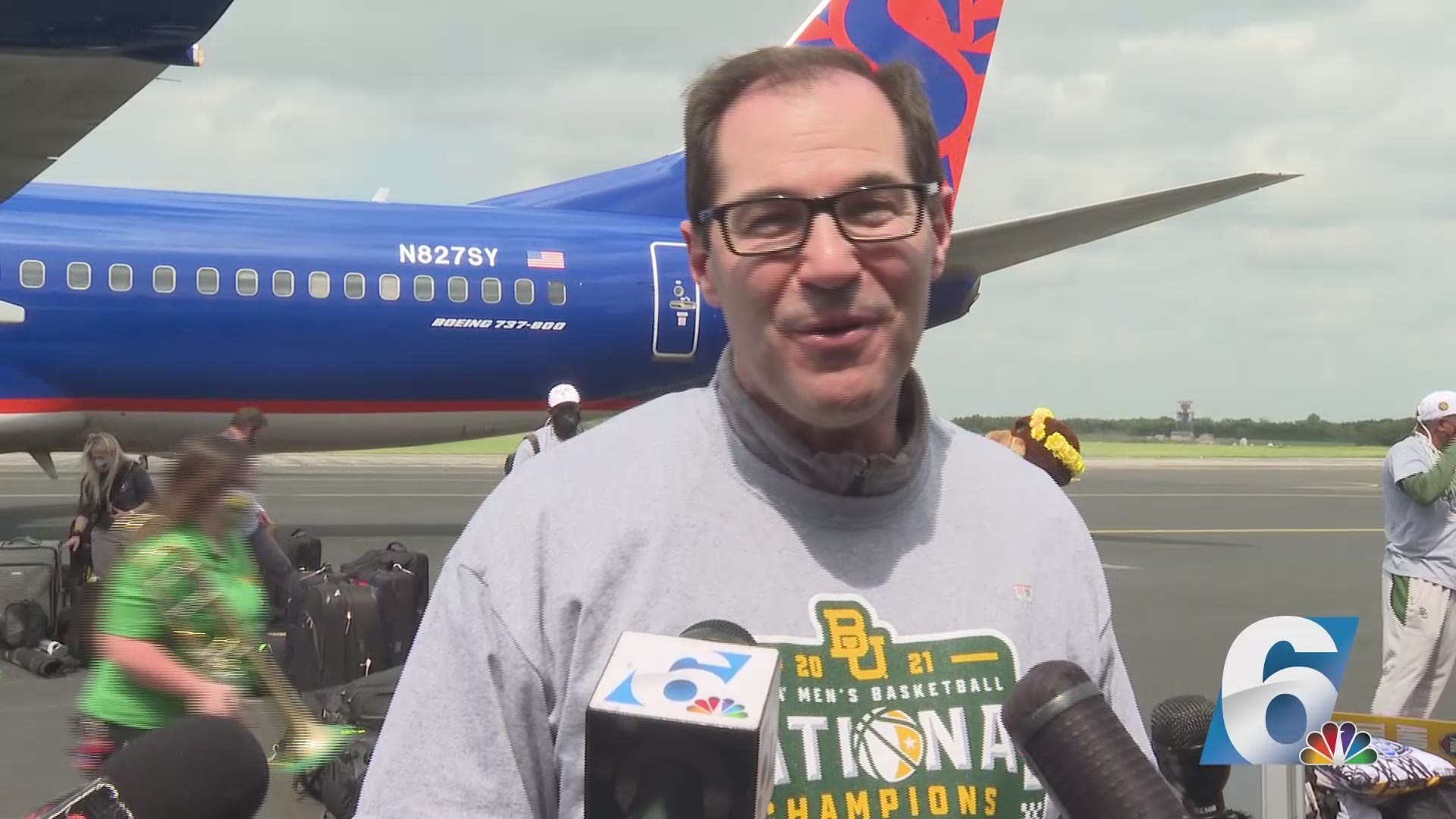 WACO, Texas — It’s like they were children who’d been grounded and told, “You can go to school and come home, that’s it.”

Imagine being allowed in only four places:

Now, imagine that lasting for a month. And, lastly, that you’re 18- to- 23 years old as a college student.

For 132 basketball teams, there was no imagining. That was their reality.

Meals were delivered to hotel rooms or conference rooms where the teams would do homework and watch film.

There was no going to a restaurant, not even as a team. There was no walking around town to get fresh air. They were at the hotel or the gym in either San Antonio or Indianapolis.

As I write this, sitting in a commercial plane over Arkansas, I think back on our 20 days of NCAA Tournament coverage for 6 News. It truly amazes me how in the world, not one, but two NCAA basketball tournaments were pulled off in bubbles during a pandemic, which has killed hundreds of thousands of Americans.

I was fortunate enough to be able to try the famous St. Elmo’s Steak House, where the shrimp cocktail was the only thing spicier than some people’s takes on Gonzaga following Baylor’s win in the national championship game.

I was able to go to the gym, Target, restaurants, the mall, you name it. If I needed to be there, I was there, whether it was for a story, a game or to get water and soda for my hotel room.

But I also know, even with the freedom I had, how weary I started feeling around the Elite Eight. And, at that point, I’d only been on the road for 12 days.

College basketball players, coaches, sports information directors and everyone involved in making college athletics happen sacrificed a month with their families, their friends, girlfriends, boyfriends, husbands, wives, children and went without sleeping in their own beds.

Tonight, I’ll see my soon-to-be fiancée and sleep in my own bed for the first time in 20 days.

The Baylor men’s team left Waco for the Big 12 Tournament on March 9, two days ahead of its quarterfinal game against Kansas State. After losing to Oklahoma State on March 12, it then stayed until the selection show and went straight from Kansas City to Indianapolis.

Johnny Juzang from UCLA was rightfully named to the All-Tournament team Monday, but he may have been the greatest embodiment of the challenges this pandemic forced on college basketball. The Bruins showed him interacting with his brother, who had just traveled from Vietnam to watch him play in the Final Four against then-undefeated Gonzaga.

.@JohnnyJuzang's brother flew in from Vietnam to surprise him at the #FinalFour ❤️

Through the hotel window because Juzang was inside the bubble.

After Monday’s national championship game, you finally got to see players and coaches and the like interact with their families for the first time in a month.

BU athletic director Mack Rhoades spent the month in the bubble with the men’s basketball team, while his wife continued to travel to support their school, knowing she wouldn’t be able to interact with him.

Two friends of mine are creative services photographers for Baylor’s opponents in the Final Four. In a normal year, we could get dinner on Final Four Friday.

Not in this year, though.

And players, still very much in the growing stages as they navigate adulthood, did whatever it took for them to be able to compete for a national championship. All the while, life happened outside of their bubble.

All the while, a pandemic continues.

Prior to hoisting college basketball’s ultimate prize, Baylor coach Scott Drew said the Bears were able to look at the bubble as a blessing, gifting them more quality bonding time as a team than they’d ever been gifted before. Gonzaga’s Mark Few said the same as the Bulldogs prepared for the Bears after an incredibly emotional win over UCLA.

Dreams came true in both San Antonio and Indianapolis, both in and out of the bubble. Dreams for players, coaches, parents, reporters, fans, alumni, support staff and so, so many more.

It took an incredible amount of work for everyone, whether they paid, got paid or played to be there.

Were there issues? Absolutely, and some of them were rather enormous.

But as both the men’s and women’s champion for the 2020-21 season have now been crowned, there’s so many people who should be thanked: Most of all are the teams, which brought fan bases together in a time when we do, truly, need a distraction; Teams which sacrificed being able to hug their parents, kids and see their friends to compete; To play in a sporting event so many hold so dearly.

Let’s all do our part to remember what it took to play the 2021 NCAA Tournaments, both of which were among the best, most entertaining and most competitive, ever. Because the stories and sacrifices from those inside the bubble will be remembered for years to come.