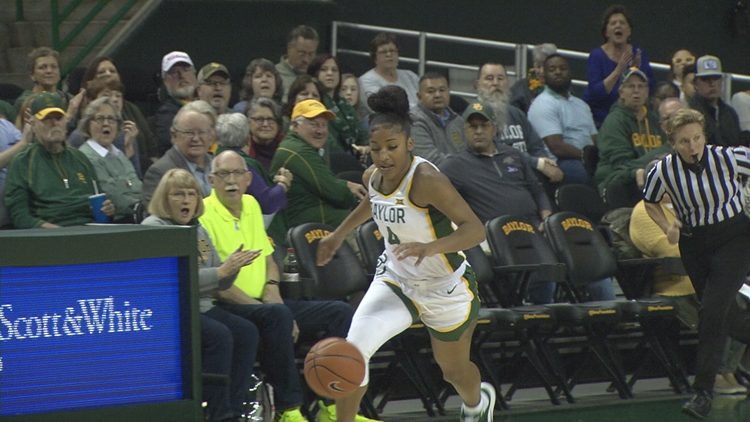 Photo by: Kurtis Quillin/KCEN
Te'a Cooper dribbles up the floor after a steal in a Big 12 women's basketball game between No. 2 Baylor and Kansas at the Ferrell Center in Waco on Feb. 5, 2020. Baylor won, 97-44.

WACO, Texas — For the second time in three days, Baylor senior graduate transfer point guard Te’a Cooper received consideration for the nation’s top point guard, this time for the WBCA Nancy Liberman Award. Cooper was among 10 finalists for the award.

Cooper stepped into the starting role of the defending national champion Lady Bears in the 2019-20 season and has helped Baylor to a 21-1 start and a No. 1 ranking in the WBCA/USA Today Top 25 poll.

Cooper scored a career-high 32 points in her first Big 12 game Jan. 4 at Oklahoma, and followed with 27 points at No. 1 UCONN Jan. 9 as the Lady Bears knocked off the top-ranked Huskies for the second year in a row.

The Lieberman Award is a part of the WBCA Starting Five awards which honor the top players at each position. For the first time, this year’s honors will include a fan vote, live Feb. 14 on hoophallawards.com.

The Backstreet Boys are coming to Texas this fall