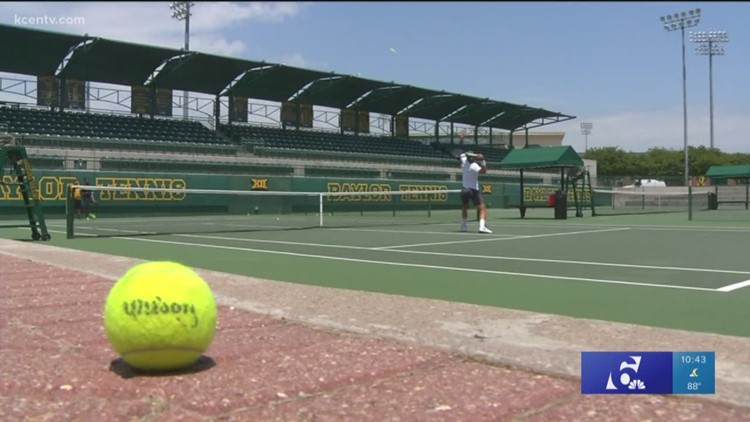 For the 18th time in 22 appearances, sixth-seeded Baylor men’s tennis (24-5) will advance to the NCAA Tournament Round of 16 after it captured a 4-1 victory over No. 20 Michigan (18-9) Friday at the Hurd Tennis Center in Waco.

BU is now 28-0 all-time in the NCAA First and Second Rounds at home and has advanced to the Round of 16 in all 14 seasons it hosted in Waco. As the higher seed, BU will host No. 11 UCLA either next Friday or Saturday in Waco.

The Bears and Wolverines battled it out in doubles action, and top-ranked Jimmy Bendeck and Sven Lah’s 6-4 win over No. 60 Mattias Siimar and Connor Johnston put the Bears in front first. Then, Michigan’s Harrison Brown and Gabe Tishman claimed a 7-6(4) win over Johannes Schretter and Constantin Frantzen to tie it up.

Michigan took the doubles point after Will Little and Matias Soto dropped a 7-6(5) decision to Andrew Fenty and Myles Schalet on court two.

The Bears jumped right back into the match when they claimed five first sets in singles action. 78th-ranked Little got the Bears on the board with his 6-2, 6-3 triumph over Connor Johnson on court four to tie it up at 1-1.

For the fourth-straight match, 112th-ranked Adrian Boitan clinched the final point when he took a 6-4, 6-3 victory over No. 74 Mattias Siimar on court three.

To keep up with things all season long, follow the team on social media: @BaylorMTennis.

HIGHLIGHTS
• The Bears improve to 58-20 all-time in the NCAA Tournament, including 18-2 in the first round.
• Baylor advanced to the NCAA Round of 16 for the 18th time in 22 NCAA appearances.
• Baylor improves to 15-0 at home this season and has outscored opponents 82-9 in Waco.
• Baylor is now 31-1 in its last 32 home matches dating back to the 2017 season.
• Baylor improves to 2-1 all-time against Michigan and 1-0 against the Wolverines in the NCAA Tournament.
• Baylor is now 30-1 all-time in NCAA matches at home.
• BU improves to 16-4 against ranked opponents this season.
• Baylor is now 21-7 in the doubles point and 4-3 when dropping the opening point this season.
• Adrian Boitan clinched his fourth straight match and improved to 6-0 against ranked foes.
• Jimmy Bendeck improves to 13-4 in dual-match action.
• Schretter improves to 11-7 in dual-match singles action and a team-high 11 ranked wins.
• Little is now 15-3 in spring singles matches.

STAT OF THE MATCH
18 – the number of times Baylor has advanced to the NCAA Round of 16 in 22 tournament appearances.

TOP QUOTE
Head coach Brian Boland
On the win…
“We prepared to deal with the loss of the doubles point because you can’t go through the entire tournament without having that setback (every) once in a while because there’s so much parity. We’ve played great doubles, we’ve been consistent, but we have to believe in ourselves if it doesn’t work out, and credit to Michigan for playing two great tiebreakers. I felt like we had the momentum in doubles and the point got away from us. The way we came out in singles from top to bottom was impressive. I couldn’t be happier for the guys.”

WHAT’S NEXT
Sixth-seeded Baylor will host No. 11 UCLA in the Round of 16 (Super Regional) round either next Friday or Saturday. Match day and time will be confirmed by the NCAA after the conclusion of all second round matches this weekend.