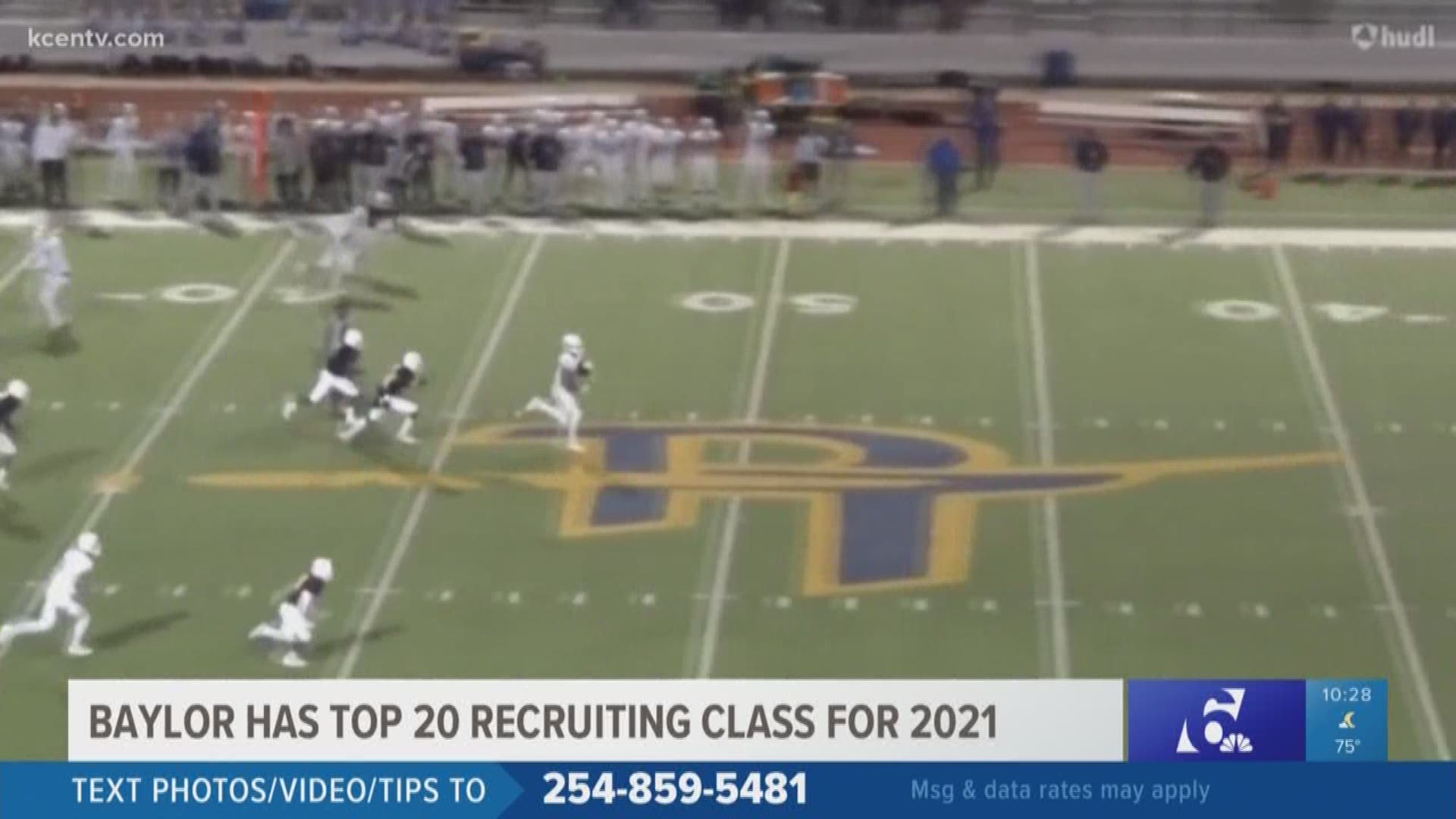 WACO, Texas — Despite the departure of Matt Rhule, Dave Aranda and his coaching staff have put together a very solid recruiting class for 2021. According to ESPN's Recruiting Nation, Baylor is ranked 19th in the country, ahead of Auburn, Oklahoma, Texas A&M and Alabama.

"It's loaded with talent and that's how you get inside the top 25 like they have," said Grayson Grundhoefer, SicEm 365 Recruiting Analyst. "They're doing a really great job on the recruiting trail. Baylor has 14 commits already and they are probably 10 away from being done with the class, maybe even under 10."

Bean is currently the 61st best receiver in the country. He is also a track standout, running the 100 meters in 11.05 seconds.

The Bears also landed four-star running back Jordan Jenkins from Lindale. In the last two seasons, Jenkins has rushed for nearly 3,000 yards and 44 touchdowns.

"He's just one of those big, physical freaks at running back," said Grundhoefer. "A guy that I think could come in and take a work load role immediately but obviously Baylor is loaded at running back so people probably won't get to see him for a little while."

Baylor picked up a huge commitment on April 29 from four-star quarterback Kyron Drones out of Shadow Creek High School in Pearland. In his first year as a starter, Drones passed for 3,390 yards and 46 touchdowns while rushing for 825 yards and 18 scores.

Drones is ranked 9th among duel threat quarterbacks in the nation. This past season, he led Shadow Creek to a 16-0 record and a Class 5A, Division One state championship as a junior.

"He accounted for 64 total touchdowns last year," said Grundhoefer. "When you are a high school quarterback and lead your team to an undefeated season, that is a pretty big deal. He will be a leader and shape this class and Baylor fans will love him."

Baylor nation will want to keep an eye on a few players in the Class of 2020, who could end up seeing significant action this season.

Devin Neal was a two-time All-District selection and runner up for Kentucky Player of the Year. He played both running back and safety but Neal will play on the defensive side of the football at Baylor.

During his senior season, he had 70 carries for 602 yards and 9 touchdowns. He caught 12 passes for 300 yards and three touchdowns while collecting 79 tackles and two interceptions on defense.

"Great athlete," said Grundhoefer. "A guy that led his team to a state championship game. The team won their state semifinal game 14-7 and he had an interception and kick off return for a touchdown during that game."

Another player to keep an eye on is four-star defensive end James Sylvester from Newton. Sylvester had 15 sacks as a senior and picked Baylor over TCU, Alabama, Georgia and LSU.

"I think he might be asked to play year one," said Grundhoefer. "He might be asked to come in and make an impact beyond the four game redshirt rule. I think he will actually play the whole season. At 6'4", 245 pounds, he definitely has the size to do it and he is just a nasty, mean competitor who built up at least 8 sacks in every single one of his high school seasons so he's a play maker."

Baylor is scheduled to open the 2020 season at NRG Stadium in Houston against the Ole Miss Rebels on Saturday, September 5.

RELATED: Inside the numbers | Why college football's status for 2020 is so important

RELATED: Dave Aranda adjusting to life outside the football field