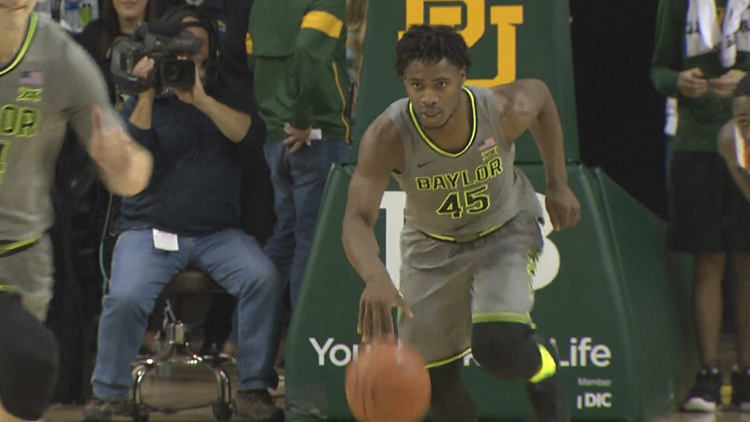 Photo by: Kurtis Quillin/KCEN
Davion Mitchell pushes the ball up the floor as the No. 6 Baylor Bears face Texas in their Big 12 Conference opener at the Ferrell Center in Waco on Jan. 4, 2020. Baylor won, 59-44.

WACO, Texas — After collecting road wins at No. 22 Texas Tech and No. 3 Kansas, Baylor has moved up two spots to No. 2 in the latest Associated Press top 25 poll.

Baylor had one of the best weeks any team will have this season, beating Texas Tech and Kansas back-to-back in Lubbock and Lawrence, Kansas. Those two wins add to a resumé that already included a neutral-court win over Villanova and home victories against Butler and Arizona.

The Bears now have five top-25 wins, more than anyone else in the country, and a 5-0 record in Quadrant 1 games, the best record of any team in the country.

Additionally, Baylor’s only loss came in its second game of the season to a solid Washington team at a neutral site in a game that it led for the majority of the time.

Even with Tristan Clark still hampered by injury, this squad is operating at an exceptionally high level on both ends of the floor.

For its part, Baylor rates ahead of Gonzaga but behind Duke in every mainstream predictive metric and in the NET.

MaCio Teague and Jared Butler make up perhaps the best backcourt in the entire country and they showed that against Kansas. The two combined for 38 points (15-for-28 FG), 11 rebounds, and six assists without committing a turnover.