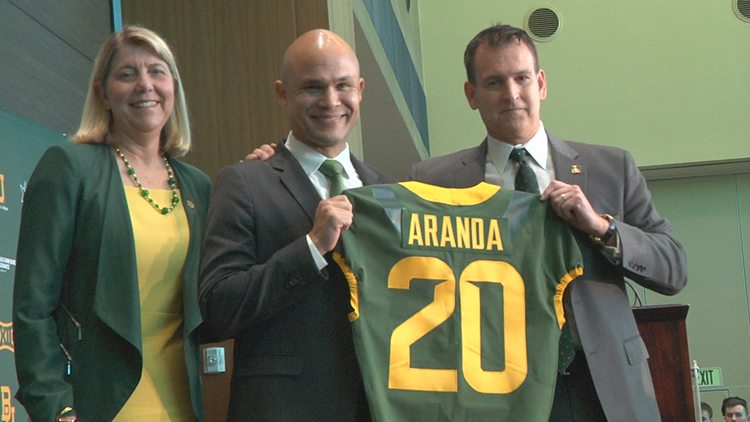 Larry McDonald was named assistant AD for recruiting. He joins the BU football staff from Texas A&M where he was named director of recruiting in 2019 after a stint at Arkansas in the same role. He held the title of personnel assistant from 2017-18 with the Aggies.

Also joining the Baylor staff from College Station is new Director of On-Campus Recruiting Landrie Walsh. A Bridgeport native and Texas A&M graduate, Walsh worked as a recruiting assistant with the Aggies in 2019.

After serving as BU’s director of football administration in 2019, Quintin Jordan was promoted to director of football operations for the 2020 campaign. He joined the Baylor staff in 2018 and worked in the Student-Athlete Center for Excellence (SACE), and previously worked at Conference USA from 2013-18.

Jake Brown will join the BU staff following one season as the offensive coordinator at West Texas A&M. He previously spent time at TCU, Stephen F. Austin and in the Texas high school ranks.

On defense, Mike Caputo is reunited with Aranda following a stint as a graduate assistant from 2017-18. He worked on-field as the safeties coach at Utah State in 2019. Caputo was an All-American safety at Wisconsin under Aranda in 2014.

Aman Anand will also work with the Bears special teams units in 2020 after operating in a similar capacity at Penn State in 2019. He held positions at Memphis, Southwestern Oklahoma State, Utah State and Northern Arizona.