When Bortuzzo re-entered after being a healthy scratch eight straight games, it comes down to giving the coaching staff good reasons to keep you in the lineup

ST. LOUIS -- The stat line shows that Robert Bortuzzo played just under 18 minutes Thursday and was a plus-3 in a 5-0 win against the Calgary Flames.

Well, they're the kinds of numbers everyone would like to see next to their name. It just shows the ways a player can contribute on a nightly basis for the defending Stanley Cup champs.

For Bortuzzo, the 17 minutes and 52 seconds played Thursday surpassed his season-high by exactly four minutes (Oct. 19 vs. Montreal, 13:52) and were the most since he played 20:06 against the Philadelphia Flyers on April 4, 2019.

But for the past number of seasons, it's been a mental merry-go-round for Bortuzzo, being the sixth or seventh defenseman on a loaded blue line.

And that's where the real challenges come in.

Bortuzzo has been rock solid the past three games since re-entering the lineup for Carl Gunnarsson, another solid veteran blueliner doing his part to keep his spot in the lineup, but when Bortuzzo re-entered after being a healthy scratch eight straight games, it comes down to giving the coaching staff the best possible reasons to keep you in the lineup. 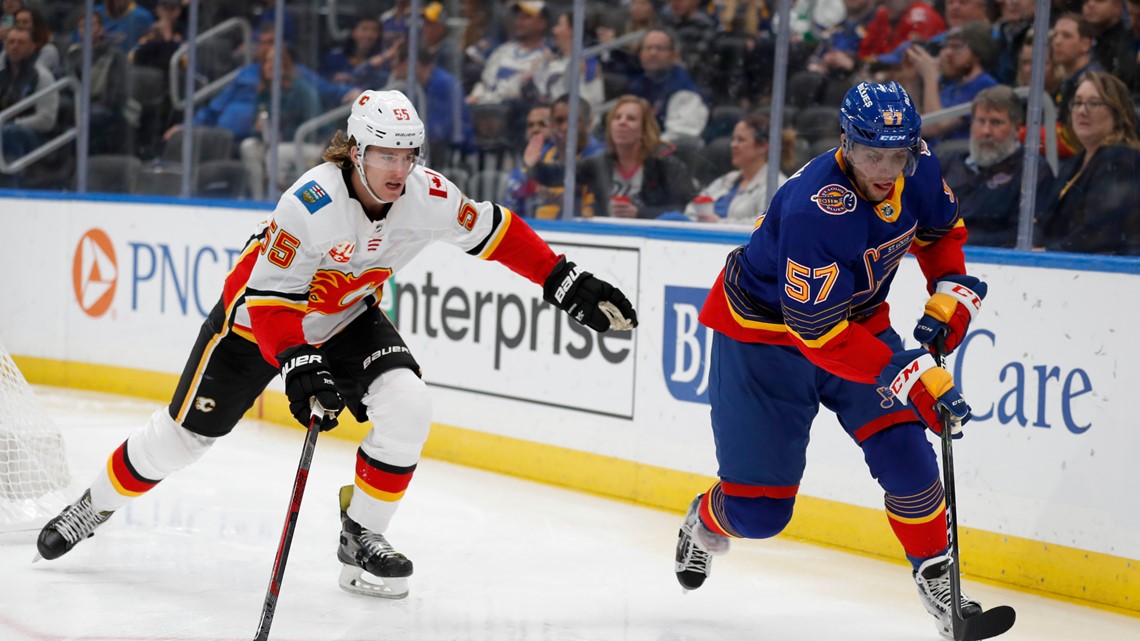 Next man up mentality has Blues winning despite key players missing
ST. LOUIS - Next man up. It sounds cliche-ish and it can be heard around coaches in all shapes, sizes and forms. From hockey to soccer to basketball and baseball and football, injuries happen and someone will have to step in and be effective in whatever role they're placed in.

"Any time you get in there, you approach it with the mentality you've got to make it very, very difficult for them to take you out," Bortuzzo said. "As understanding as the circumstances I am with all the circumstances here, it's no secret that we want to play every night, every d-man or everyone wants to be in there every night contributing, but at the same time, you've got to carry yourself like a pro, prepare when you're not in the lineup and be ready when called upon. I don't want to say I've got it down to an art, but I know what I need to do to take care of myself and to focus and take information for when I'm not playing to be able to execute it for when I am in there."

Bortuzzo, who has one assist in 10 games this season and is a plus-3, won't overwhelm you on the stat sheet. He'll normally be paired on the defensive pairing, not playing 20-25 minutes as, say, an Alex Pietrangelo or Colton Parayko would do, or even a Jay Bouwmeester or Justin Faulk. Bortuzzo will normally be paired with high-flying Vince Dunn, and that's OK by him. He'll just be the physical, sandpaper and grit that is required to execute the Blues' defensive style and game plan.

And he may be at his best since arriving via trade from the Pittsburgh Penguins on March 2, 2015 along with a 2016 seventh-round pick for Ian Cole.

"I think over the last couple years, I don't want to say I've come into my own, but I just feel more confident out there with the puck, puck play," Bortuzzo said. "Confidence is higher. Playing in our team system, it makes us all look better and I think we all realize that. It's just fun and once you're confident in your abilities and you know you can contribute every night, it makes it easier knowing that when you are called upon, you can contribute."

Right now, it's making it tough for Blues coach Craig Berube to take the grizzled veteran out, a problem Berube agrees is good to have along with Gunnarsson.

"He's hard to play against," Berube said of Bortuzzo. "He's just in your way and he's hard on the opposition and he doesn't give them any room. He's physical. He does the little things right that maybe go unnoticed by a lot of people, but it's the little things he does. Obviously on the PK, blocking shots, he's one of the best, front of our net boxing people out, being hard on people around our net. Just mucking and grinding and getting in the way. He's a smart player. He knows how to play, he's been a pro for quite some time now. He is a smart player. He knows what's going on. He knows what to do."

Bortuzzo is in the first year of a three-year, $4.125 million contract signed on Dec. 15, 2018. He had the chance to play out his previous contract, hit the open market and look elsewhere and bank on signing somewhere else with the hopes of playing every night. Sometimes, winning and being part of an organization one is comfortable with trumps all other options. It's the mindset the Blues have built and the players are all in unison playing here.

"My mentality coming into this league and being in the Blues organization is I just want to win. I want to be on winning teams," Bortuzzo said. "This is a place that's had success in the past when I got here and we've had some success through my time here and we were able to get things done last year. At the end of the day, it's about contributing to winning hockey. If you ask anyone in here, it's a blast coming to the rink every day. Yeah, it's tough when you're coming in and out of the lineup, but to know you're behind a good team and a strong, strong d-corps, it takes a little bit of the sting away when you are coming into the lineup. For me at the end of the day, it's just about winning.

"I'm 30 now. At the end of the day, personally I would find it just very tough missing playoffs. This is your life. You're coming into the rink every day and you want to enjoy things. Very happy with where we're at. Confident in your abilities. You should be playing every night, but at the end of the day, it's about winning hockey teams and whatever it takes to do that, I'm happy with."

Each and every blueliner the Blues have contributes in their own respective ways, and while Bortuzzo may not dazzle with the offensive numbers, helping keep pucks out of his own net is equally as important.

Need a shot blocked? Bortuzzo, who averages a block per game, will be your guy. Need minutes killing a penalty? Bortuzzo is your guy. He'll stand right there looking to get in the way of an Ovi-bomb like no other. Need someone to check and throw their weight around? Bortuzzo's your guy. It's the little things, as Berube said, that go a long way.

"He's a guy that nobody wants to play against," Parayko said of Bortuzzo. "He's tough to play against, he's making plays. When you see him in the d-zone facing the puck, he makes plays under pressure. We saw it numerous times yesterday. He just has a good sense for the game overall. He's big, takes up a lot of space and nobody wants to go up against him. He plays a hard style of hockey too. He'll go up against anyone. He'll give anyone a run for their money.

It's what makes the Blues' group as mentally tough as anyone. Being on the outside looking in is as challenging as being able to execute on the ice, or harder.

"It's hard mentally for sure. It's hard for any player," Berube said. "They've been real good at it since I've been here. Both really good pros, both really good team guys. From that standpoint, that's why they can do it and get through it and perform at a level that's needed when they get in there because they're good pros and they're good team guys and they understand the situation."

Bortuzzo said, "It's a balance. I'd say physically, it's easier because that's just put your head down, put your work in, in practice, and working after practice. I think the mental side of the game is something I've been able to strengthen over the years. It's a major part of this game that kind of goes a little bit unspoken about. It's not easy.

"I'll just go back to wanting to be there every night and enjoying the game. Playing the games are fun. It's something you grew up loving and being around your teammates. When you've been separated from that a little bit, it's hard, but you've just got to approach it with the mentality of you know what your abilities are and when you are in there, you can contribute and you can't veer away from that."

Bortuzzo, who has 53 points (14 goals, 39 assists) in 345 NHL games in his ninth season, hasn't come close to veering away from that, especially this season.

"Just kind of doing what we do. We don't try get outside ourselves," Bortuzzo said. "I think that's when I have most of my success out there is keeping to my game, keeping things simple. I work well with Vince and he's a world-class player. He makes things easy on me and I think as a defensive group together, we do a good job of communicating out there and that's what makes the game come easy is when you're communicating and you're in the right spots. Our team makes everyone look like they're playing well." 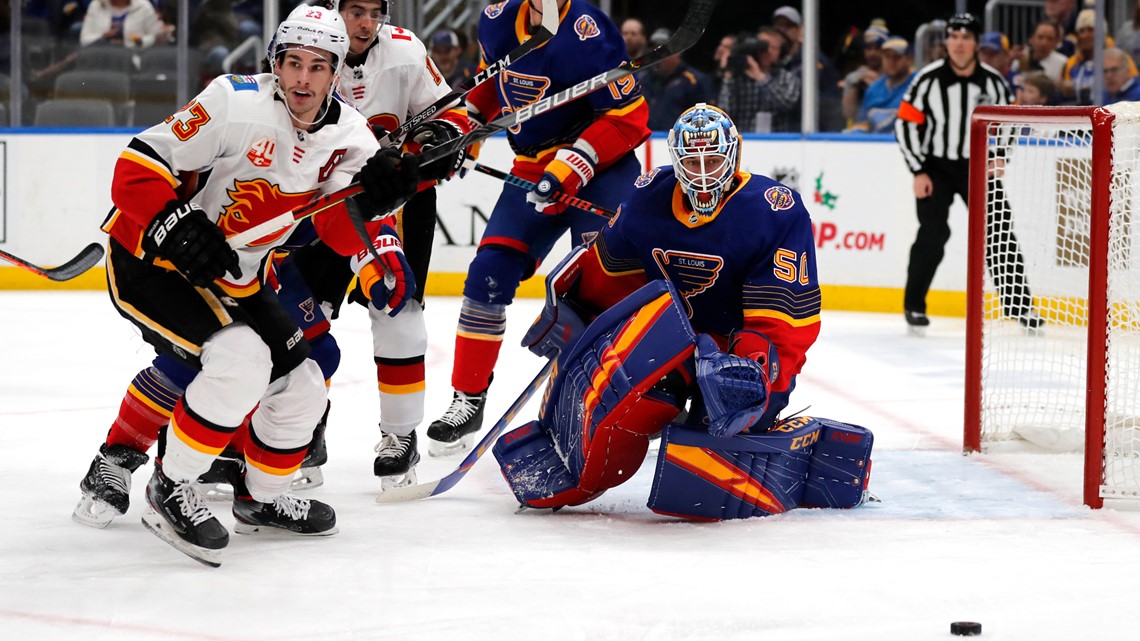 RELATED: Sports Plus Podcast: Welcome home Pat Maroon, a year of Berube and an early look at SLU and Mizzou on the hardwood

RELATED: Six things to know about Stan Musial on his 99th birthday