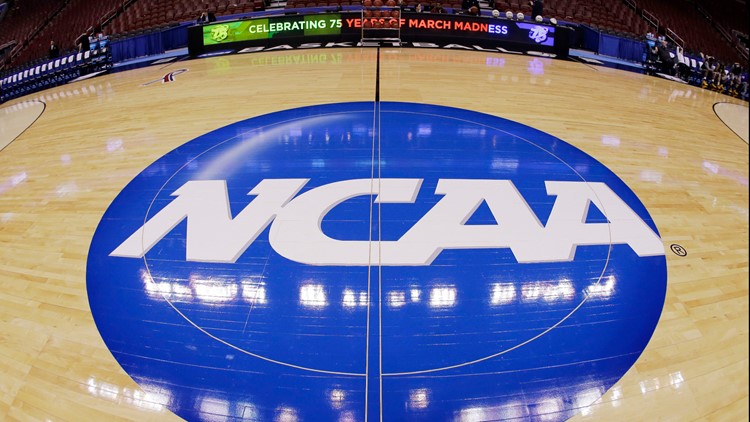 Photo by: AP
FILE - In this March 21, 2013, file photo taken with a fisheye lens, the NCAA logo is displayed at mid-court before Albany's practice for a second-round game of the NCAA college basketball tournament in Philadelphia. A judge has ruled against the NCAA in a federal antitrust lawsuit, saying football and basketball players should be permitted to receive more compensation from schools but only if the benefits are tied to education. (AP Photo/Matt Slocum, File)

BRACKETOLOGY: Heading to Kansas City, Big 12 projected to get 8 teams into NCAA Tournament

TEMPLE, Texas — The Big 12 Tournament bracket is set and it appears 80 percent of the league is playing for a spot in the NCAA Tournament.

In his latest Bracketology projections, released Monday, ESPN's Joe Lunardi has eight Big 12 schools in the "Big Dance," with TCU joining the mix following a win at Texas on Saturday. That number ties the league for second in total count with the Big Ten, trailing the ACC by just one team.

Percentage-wise, the Big 12 leads the nation, significantly. Sixty-four percent of the ACC is projected to go dancing and about 57 percent of the Big Ten.

With six days until Selection Sunday, when the committee will announce the official 68-team bracket, the clock is ticking for these teams to get their resumes on the top of the pile.

Prairie View A&M's berth in the First Four would be one of the bottom four automatic qualifiers, projecting them as champions of the upcoming SWAC Tournament. PVAMU will host SWAC 8-seed Alcorn State in the quarterfinals Tuesday at 8 p.m. The SWAC Tournament semifinals and finals will be played Friday and Saturday in Birmingham, Alabama.

Houston heads to Memphis for the American Athletic Conference Tournament, where the Cougars have a bye to the quarterfinals. As the AAC's 1-seed, they will play the winner of USF and UConn (Thursday, Noon C.T.). UH is ranked 11th in the latest AP poll.

Sam Houston State won the Southland Conference regular-season championship and has a bye to Friday's semifinal. The Bearkats will play the winner of New Orleans and the winner of Wednesday's first-round game between Houston Baptist and Lamar. Abilene Christian has the other semifinal bye as the 2-seed.

TCU's projected berth in the First Four would put them in as one of the bottom four at-large berths. The Horned Frogs' match-up against Clemson is projected to be paired against 5-seed Auburn, which beat Tennessee on Saturday.

The Big 12 Tournament begins Wednesday night and without a barrage of upsets during Championship Week, it looks as if West Virginia and Oklahoma State will be the only Big 12 schools sitting at home in a week. Although, there are people who don't think that's fair.

The Horned Frogs likely need a win, possibly two, in Kansas City to prove it deserves a spot in the field of 68. In the NET rankings, the NCAA's new metric for ranking basketball teams, TCU is 47th. That's low enough, which one or two too many upsets puts the Frogs on edge.

Texas is an enigma. The Longhorns are ranked 39th in the NET but, at 16-15, are one of the most polarizing teams in the debate. Texas faces Kansas in the Big 12 Tournament quarterfinals Thursday night and a loss will put them right at .500 for the committee. That 16-15 record includes a 2-8 road mark. For comparison, Baylor is 36th at 19-12.

The Big 12 Tournament Bracket is: