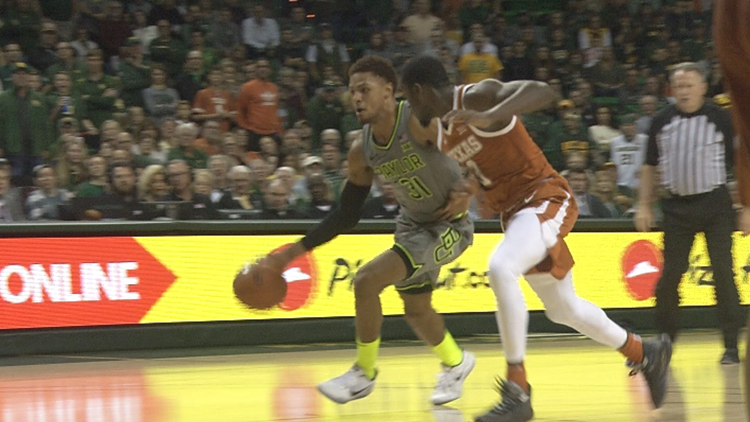 Photo by: Kurtis Quillin/KCEN
MaCio Teague drives to the basket during a Big 12 Conference men's basketball game at the Ferrell Center in Waco on Jan. 4, 2020. No. 6 Baylor beat Texas, 59-44, to move to 11-1 overall, 1-0 in conference, holding the Longhorns to their lowest scoring output in the Shaka Smart era.

Jared Butler and MaCio Teague pick up Big 12 Honors as Baylor MBB climbs to No. 2

Two road wins over ranked teams led to a two-spot jump to No. 2 in the AP Top 25 as well as two Big 12 Conference weekly awards for Baylor basketball players.

Sophomore Jared Butler was named Big 12 Conference Men’s Basketball Player of the Week and redshirt junior MaCio Teague was tabbed as the conference’s co-Newcomer of the Week, sharing the honor with WVU’s Miles McBride. The duo helped Baylor to a pair of marquee road wins.

The Bears knocked off No. 22 Texas Tech 57-52 on Tuesday, snapping the Red Raiders’ 15-game home winning streak, which was the nation’s sixth-longest. BU then recorded its first win at Allen Fieldhouse, defeating No. 3 Kansas 67-55 on Saturday, ending the nation’s second-longest home winning streak at 28 games. It was Baylor’s first road win over a top-5 team in program history.

Butler scored 10 straight second-half points in the win at Kansas, and he finished with a game-high 22 points, along with four rebounds, three assists, two steals and one block in 33 minutes. In the win at Texas Tech, Butler made a pair of clutch buckets on consecutive possessions with less than four minutes remaining and the Bears leading by four each time.

Teague posted 16 points, a team-high seven rebounds, three assists, and zero turnovers in 35 minutes of the win at Kansas. He scored 11 points as part of the Bears’ 22-4 run to close the first half, turning a 20-15 deficit into a 37-24 lead at the break. He added a 3-pointer with 10 minutes remaining after Kansas cut the lead to five points, sparking a 10-2 run which gave Baylor a double-digit lead for the remainder of the game.