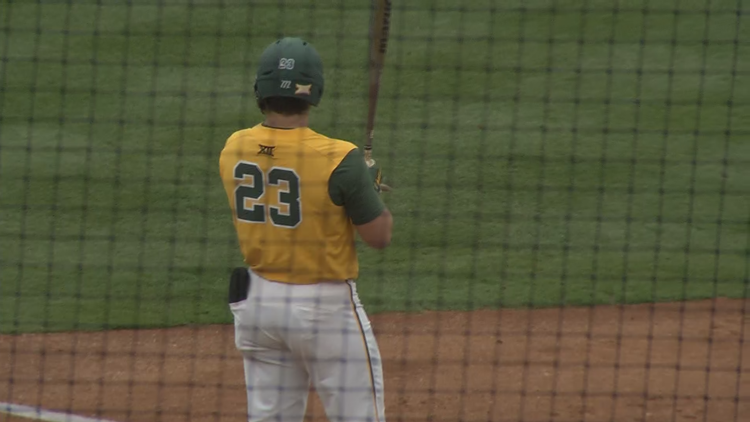 Photo by: Kurtis Quillin, KCEN
Shea Langeliers returns to the Baylor lineup as the DH when the Bears faced Nebraska March 10, 2019 at Baylor Ballpark. The Bears won the game 10-3.

Things got started in a hurry, for Baylor, when catcher Shea Langeliers scored Richie Chunningham on a two-run home run in the top of the first inning.

Langeliers then hit another home run during his next plate appearance, in the third inning. He also hit an RBI single in the fourth.

All-in-all, Langeliers hit three home runs, having added one in the seventh, on 5-for-6 for 11 RBI's. His RBI total is an NCAA Tournament single-game record.

Not to be out-done, Andy Thomas and Josh Bisonette also hit home runs Saturday, as Baylor scored in eight of nine innings.

The Bears return to action at 2 p.m. Sunday against the loser of Saturday night's game between No. 1-seed UCLA and No. 3-seed Loyola-Marymount. Because the NCAA Tournament is double-elimination, the winner of Sunday afternoon's game will play Saturday night's winner in the first game of the LA Regional Final.