Source: Nationals owners requested they not have to respond to request to sit with President Trump at Game 5

The principal owners of the Nats had a special request of the MLB last week: They had no desire to be put in a position of turning down a request to sit with Trump 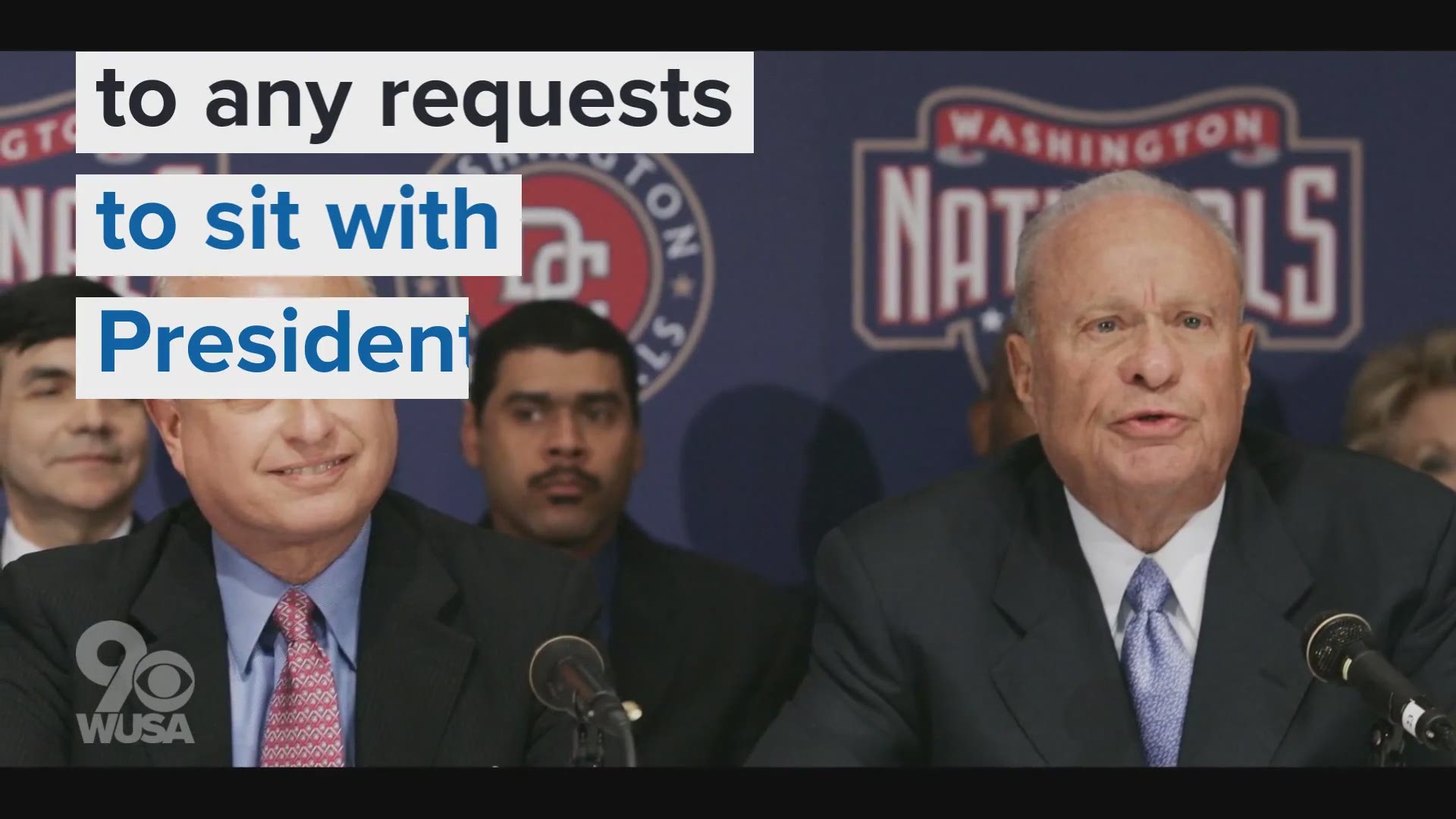 WASHINGTON — WUSA9 has learned that the family who owns the Washington Nationals, the Lerners, asked Major League Baseball that they not be put in a position to respond to any requests that President Trump sit with them during Game 5 of the World Series at Nationals Park in Washington, DC.

Mired in Congressional gridlock, polarized by partisan politics, Washington has served as a window into a divided America for much of the past decade. But along came these Washington Nationals late this summer, galvanizing red and blue, winning the wildcard, knocking off the Los Angeles Dodgers and then the St. Louis Cardinals in the National League Championship Series.

Suddenly, through the resilience of a come-from-behind baseball team, a modicum of civic unity returned to the District and beyond, making some of us forget, at least for a moment, about the bickering on Capitol Hill.

But Sunday night at Nationals Park, the last home game of this glorious postseason, it's back to taking sides. It's back to....political baseball.

Since he took office in January 2017, President Trump has not attended an MLB game. He made his first visit to Nationals Park Sunday for Game 5 of the best-of-seven matchup between the Nats and Astros, tied at 2 games apiece.

A representative of the Lerner family, the principal owners of the Nationals, had a special request of the MLB last week: that they had no desire to be put in a position of turning down a request from the White House for President Trump to sit with Theodore Lerner, 94, the family patriarch, or any other member of the ownership group, a person familiar with the family's thinking told WUSA9 on condition of anonymity.

That person made it clear that at no time was a direct request made that the President not be seated next to the Lerner family, but it was made clear that the family did not want to be put in the awkward position of having to respond to a request.

RELATED: How Maryland's wealthiest man came to own the Washington Nationals

Trump instead sat in a suite in Section 119. The idea to attend the game was Trump's, according to a team official.

Woodrow Wilson became the first president to attend a World Series in 1915. Since then, it's become a tradition for nearly every sitting U.S. president. The only years a president in office did not attend a game in Washington after 1915 were between 1971, when the Senators left, and 2005, when the Nationals returned. Each one has also thrown out a ceremonial first pitch at some point during their presidency. But it won't happen this year for Trump.

That honor was decided long in advance of the President informing Major League Baseball of his intentions to attend Game 5 in the past two weeks. The first pitch will be thrown out by José Andrés, the humanitarian and restaurateur who has been openly critical of his administration.

Trump did not have a say in such matters because the team decided in advance who would throw out the first pitches at their three World Series games. And Andrés was their choice for Game 5, the only game the White House indicated that Trump would be available to attend.

RELATED: José Andrés, a staunch Trump critic, will throw the first pitch at Game 5, with Trump in attendance

The President and the famous chef have a personal and legal beef dating back almost five years. Angered by Trump's 2015 vitriolic comments against Mexican immigrants during the campaign, Andrés pulled out of a contract to open an upscale eatery in Trump's Washington hotel. Trump sued, Andrés countersued and the two settled out of court in 2017.

The bad blood continued a year and a half ago when, after the Philadelphia Eagles were disinvited from a White House champions honoring ceremony after they won the Super Bowl, Andrés invited them to his restaurant.

Before tonight, baseball was doing so well on that civic unity thing, no?

We reached out for a comment from the White House, but have not yet received a response.