Relive the best moments of the Nationals Victory Parade

Baby Shark was played, Davey couldn't be contained in a bus, Zimmerman teared up and DC will be dugout dancing for days. 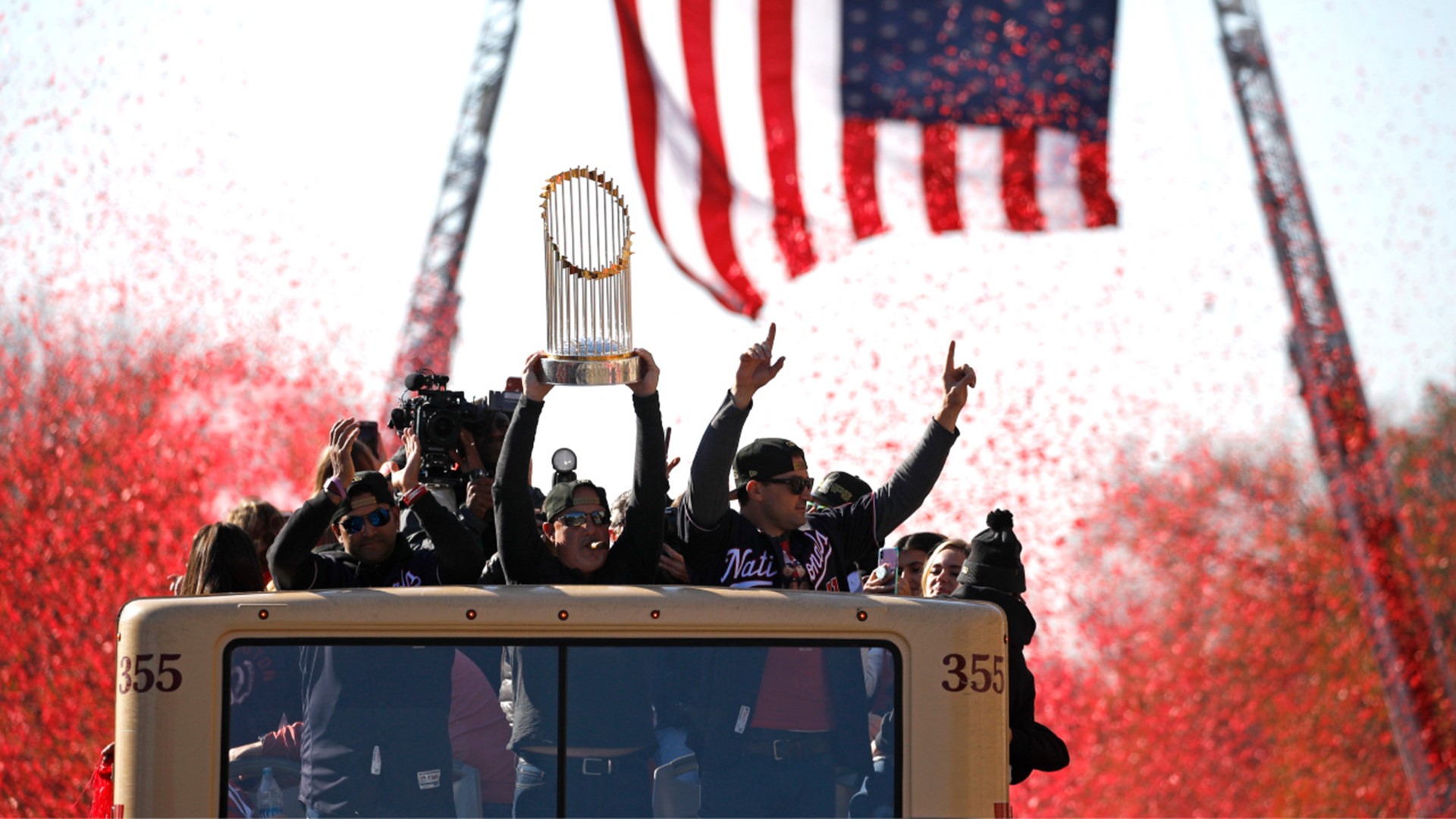 WASHINGTON — After an 88 mph fastball from Daniel Hudson to the mitt of Yan Gomes ended an 86-year baseball drought in the District, the World Series-winning Nationals received a heroes welcome Saturday as they paraded through a sea of red down Constitution Avenue.

"I truly believe this is the greatest city in the world to play baseball for."

The face of the franchise, Mr. National himself, squeaked out the sentiment as he held back tears on stage at the Nationals victory parade. Ryan Zimmerman, the Nats first draft pick, was the first to get choked up looking out into the faces of the fans he said he "grew up with."

From manager Davey Martinez asking "his boys" to join him at the podium for his entire rally speech, to Anibal Sanchez and Gerardo Parra embracing stoic Stephen Strasburg,what was clear is that this is a unified team of men who not only win games together, but they have a lot of fun doing it.

Though a slightly tamer parade and rally than fans saw in 2018 from the Washington Capitals, the heart of this franchise, who went from 19-31 in May to World Series champs in October, shown through.

"It's definitely overwhelming, but it's a good thing," Anthony Rendon said. "We had no idea what a parade like this was as a kid, we were so focused on baseball that it's hard to imagine."

Resiliency, grit and determination were the themes of the day. Announcer Dave Jageler reminded fans of all the times this team was dismissed or counted out arguing that "this team almost defies belief."

"We came from a dark place ... but we played playoff games from June on," Zimmerman said.

In a surprising twist of events, General Manager Mike Rizzo may well be the Alexander Ovechkin of the Nats, as he left a stogie hanging from his weathered lips all afternoon, and was seen cradling the Commissioner's Trophy any chance he got.

Martinez showed no concern for his recovering heart, as he bounded off his bus to run down Constitution, shaking hands and posing for photos with fans. His energy literally couldn't be contained by a bus.

"Often, bumpy roads lead to beautiful places," Martinez said after the team's Game 7 win against the Houston Astros. "And this is a beautiful place."

Of course, there were myriad Baby Shark playings, and an epic nod to Adam Eaton's now iconic dugout dance. Yes, he came in clutch.

All of our favorite Nats super fans, from bearded Bam Bam to defender of beers Jeff Adams and even Captain Obvious, were on hand to partake in the festivities.

RELATED: This man hasn't shaved his beard in 7 years to honor the Nationals

The District of Champions endured many seasons of loss and disappointment leading up to this sweet victory. But as owner Ted Lerner, who affectionately nicknamed himself "Grandpa Shark," said, "It was worth the wait."

1 / 32
WUSA9
D.C. has experienced two victory parades in the last 18 months, so we know how to celebrate! Take a look at the scene downtown.

RELATED: Wise: Savor every minute of the Nats World Series Parade -- after all the struggle, this feels sweet