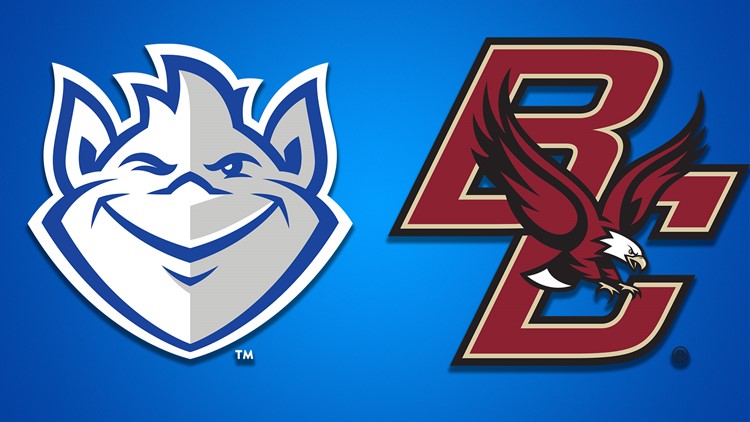 BOSTON — Jordan Goodwin scored seven of his 20 points during a game-breaking 21-0 run midway into the second half, and Saint Louis posted a 64-54 victory over Boston College on Wednesday.

Gibson Jimerson added 11 points for the Billikens (6-1), who played their first road game of the season after an opening six-game homestand. Goodwin added 14 rebounds.

Derryck Thornton led BC (4-3) with 18 points, and Nik Popovic had 15 with eight rebounds. The Eagles have dropped three of four.

Saint Louis took charge with their 21 unanswered points over nearly an eight-minute stretch midway into the second half, turning a three-point deficit to a 53-35 edge on Jimerson’s 3-pointer from the right wing with 8:15 to play.

RELATED: SLU's Hasahn French named A-10 player of the week

BC made a late charge, closing it to six points in the final minute.

Saint Louis forward Hasahn French, the Atlantic 10’s reigning player of the week after grabbing 24 rebounds and scoring 21 points with seven blocks in the last game, had early foul trouble and scored 11 points with 11 boards in 24 minutes.

BC guard Jay Heath, the team’s second leading scorer at 12.7 points per game, was out because of sickness and forward Jairus Hamilton, who missed the last five games after injuring his knee in the season opener, returned but took a hard fall in the first half going for a rebound.

Hamilton went to the locker room with a bruised right hip, but came back into the game late in the half.

It was the teams’ final game of the Gotham Classic, which features five schools from across the country (along with Belmont, Eastern Washington and High Point).

Saint Louis: Picked seventh in the A-10’s preseason poll, the Billikens have a solid core of juniors with Goodwin, Perkins and French that should made them very competitive in conference play.

Boston College: Facing a front line that rebounds well gave the Eagles a lot of trouble for the second straight game. It looks like it’ll be the toughest thing for them to overcome this season with getting tougher inside. They got outrebounded 49-37.

BC freshman Julian Rishwain, coming off a season-high 15 points in the last game, made his first collegiate start with Heath sidelined.

Boston Celtics guard Marcus Smart watched most of the first half sitting across from BC’s bench. He played for Saint Louis coach Travis Ford at Oklahoma State. He was scheduled to play against the Brooklyn Nets later Wednesday.

Boston College: At Richmond on Saturday.