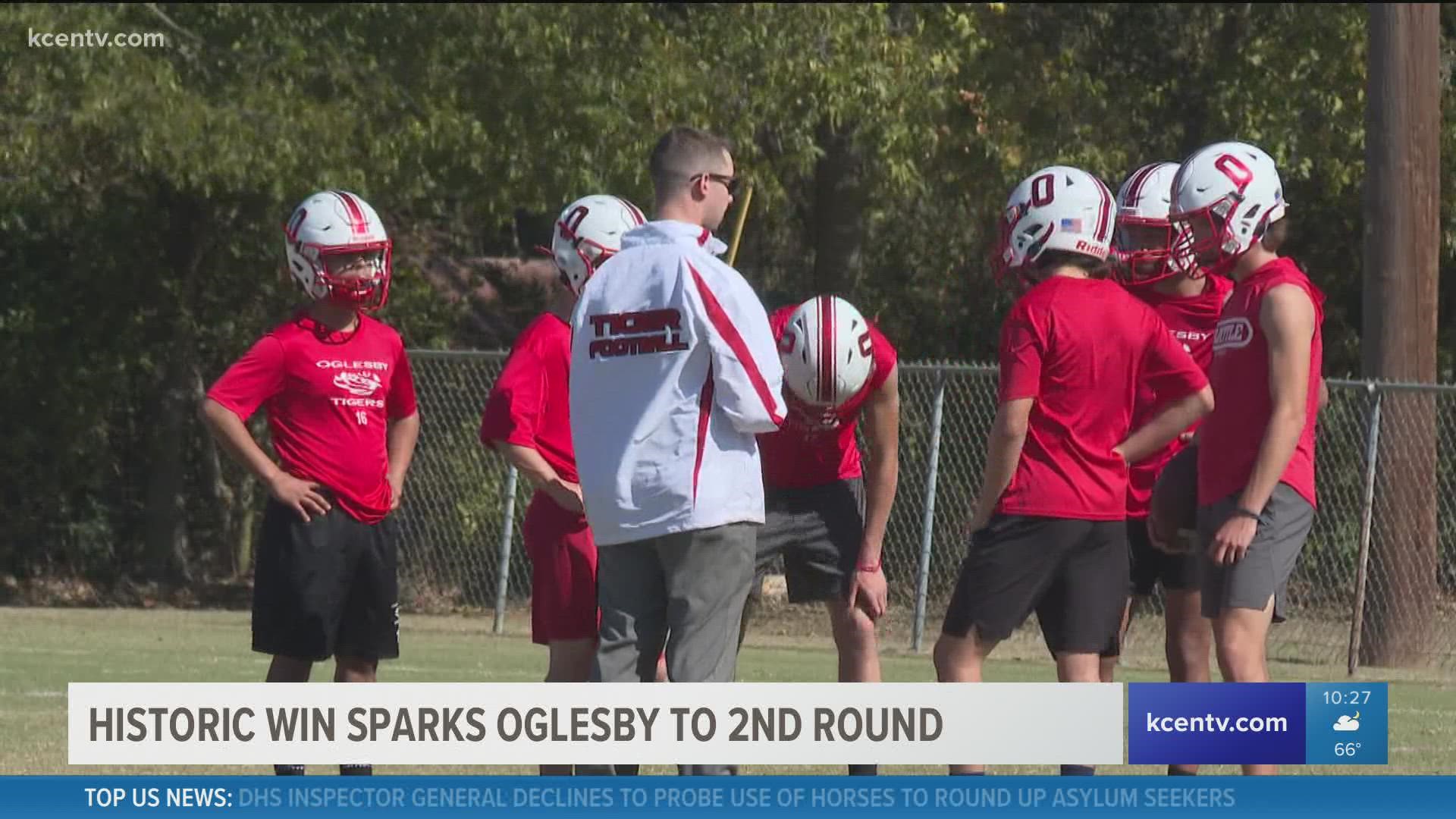 OGLESBY, Texas — If you drive through Oglesby, Texas on a Friday night, you can expect to find most of the town at a Tigers' football game.

“Ya know, just a little one-horse town with no stoplights, and I think there’s one-stop sign downtown at the square," head coach Jeb Dixon said.

Oglesby plays 6-man football. The school opened in the 1930s, the town has consistently held a small population, and football has always reigned king.

Each and every Friday night, the stands are packed with fans, former players, and lifelong Tigers. Last Friday, during the bi-district round of the UIL playoffs, the Tigers played the Calvert Trojans, a familiar foe.

“Well its not really a rivalry because we haven’t beat them in 14 tries," Chris Villarreal, assistant coach and 2005 Oglesby grad, said.

Dating back to 1998, the Tigers have played the Trojans 14 different times. Each and every game resulted in a loss for Oglesby. It has become somewhat of a curse.

Calvert Dixon took over as head coach in 2020. He was born and raised in Gatesville and watched his uncle coach the Tigers back in the 1980s.

“Had a local, uh, guy here call me, I don’t know Monday or Tuesday, and he said, hey we’ve never beat these guys," Dixon said.

Last season, Dixon notched the Tigers first playoff win since 1983. His uncle was the head coach of that team.

If there was a man to beat Dixon was the guy.

That mentality worked. The Tigers beat the Trojans 48-30. The game featured five rushing touchdowns and six fumble recoveries for Oglesby. It was a full-team effort, and a full-town celebration.

“I got a ton of text messages and calls and just said we finally did it, ya know," Villarreal said.

The Tigers of old can finally breathe a sigh of relief. They have Dixon and the Tigers of the present to thank.

“I had no doubts, me and the seniors we were ready, we were trying to get everybody ready, everybody was really mentally prepared for this game," senior Blake Thompson said.

His teammate, Senior Matthew Castillo, says he sensed a shift in the program over the last few seasons.

“I really didn’t want to play them the first two years, but I felt confident this year," Castillo said.

They've won back-to-back bi-district games and now they've beat Calvert. The next goal on the list is to notch a second-round win.

The Tigers will play Richland Springs at 7 p.m. in Comanche on Friday.