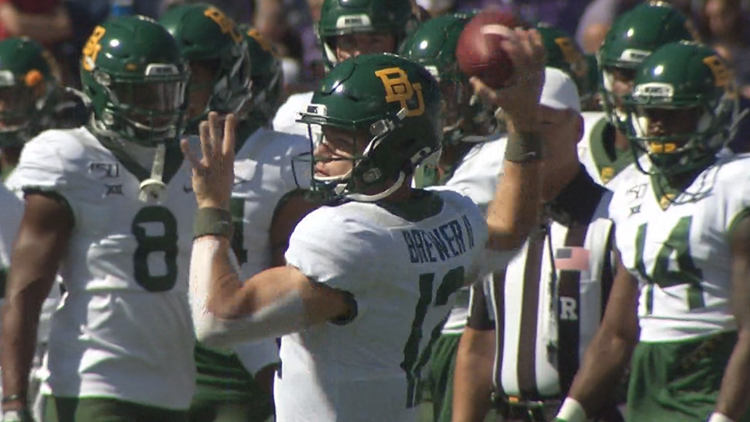 Photo by: Kurtis Quillin, KCEN
Baylor QB Charlie Brewer warms up before the Bears play at Kansas State on Oct. 5, 2019. Baylor beat the Wildcats, 31-12, behind 230 passing yards from Brewer.

Bear's head coach Matt Rhule made the announcement at his weekly press conference on Monday.

Brewer was pulled from Saturday's 31-12 win at Kansas State after taking a hit on a pass attempt to Denzel Mims in the fourth quarter.

After Baylor's medical staff tended to Brewer on the field, with the Bears up 17-6 and in full control of the game, Rhule said he had already been thinking of pulling him. After a quick trip to the medical tent, Brewer was moving around the sideline for the final frame and celebrating with his teammates.

Brewer passed for 230 yards and a touchdown in the win, helping get Baylor to 5-0 and its first ranking in the Matt Rhule era, where the Bears are 22nd in the AP Poll and 23rd in the Coaches Poll.

Brewer and the Bears will face Texas Tech at 3 p.m. Saturday at McLane Stadium in Waco.