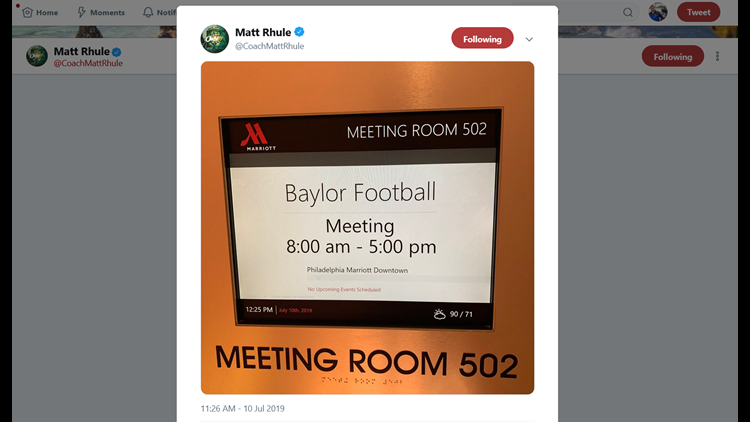 Photo by: Twitter: Matt Rhule
Coach Matt Rhule took his senior class to Philadelphia in early July for a football summit, to learn what it takes to be successful pros.

WACO, Texas — At Big 12 Media Days, Matt Rhule answered a slew of questions about his team as he prepares for his third season in Waco.

Among those questions, he was asked about a football summit he tweeted a picture July 10th.

On the trip, Rhule took Baylor seniors to meet with NFL personnel and talk about anything and everything involved in becoming a successful professional player, including agents.

He even admitted to calling Holgerson's director of operations at WVU, Alex Hammond.

"It wasn't really about getting into the NFL, it was about staying in the NFL," Rhule said. "It was about how to be successful. Mike Lombardi talked to them, so did Brian Bollinger. We wanted them to learn that information."

Rhule said it was a unique experience for his seniors. An experience they were grateful to have.

"At the end of the day, most importantly, I want our guys to be able to take advantage of learning everything there is to being a pro," Rhule said.