He was originally from Houston, where he played at Alief Taylor High School. 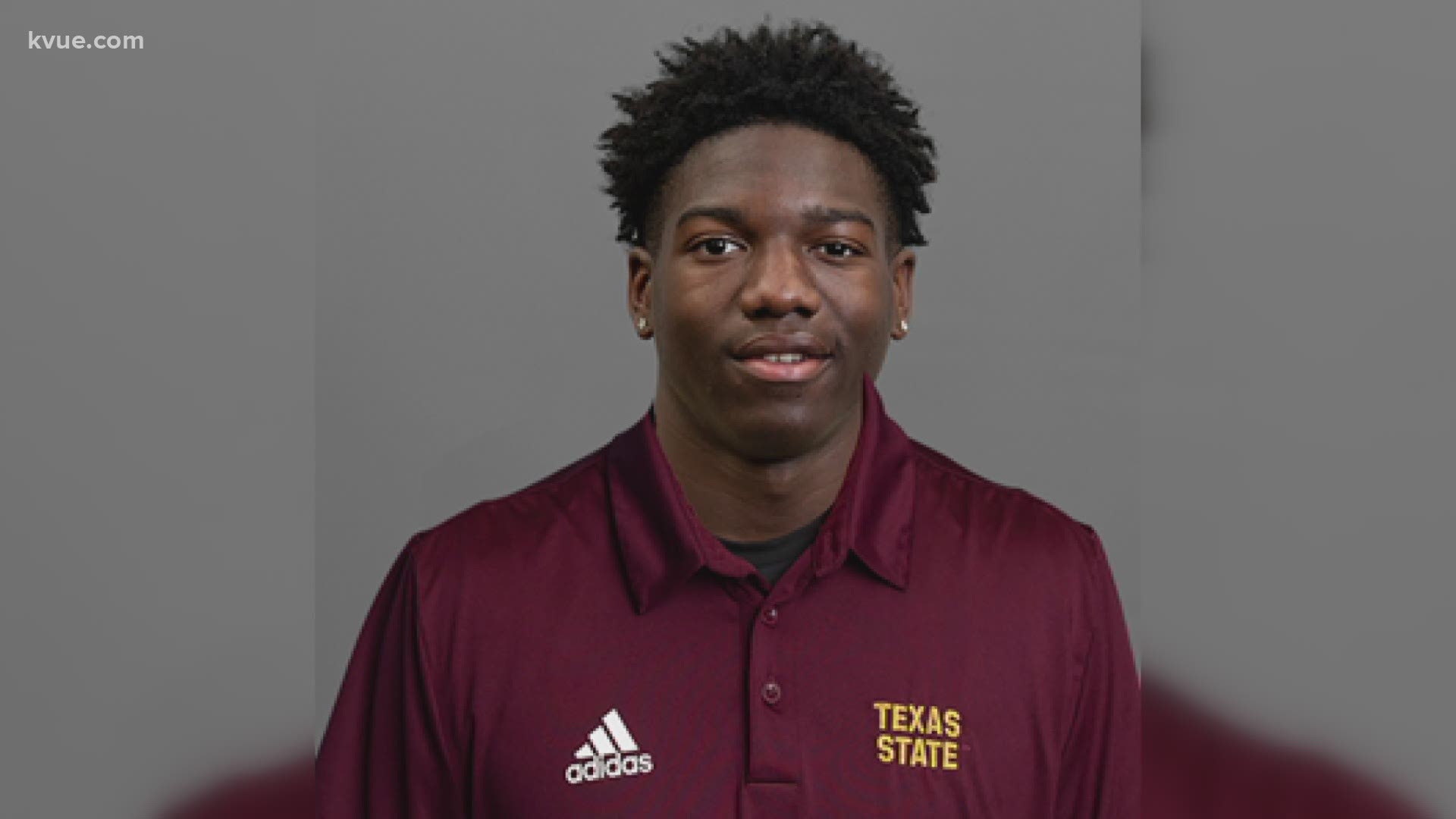 SAN MARCOS, Texas — Texas State football player Khambrail Winters was killed in a shooting in San Marcos, and police have now identified the person who allegedly shot him.

The City of San Marcos said the shooting happened on Tuesday, Nov. 24, at around 9:13 p.m. at The Lodge Apartments. That complex is located at 1975 Aquarena Springs Drive.

Officers were called there after receiving reports that gunshots were heard and people were seen running from the area. When they arrived, officers found Winters with a gunshot wound to his chest.

"During the interviews, it was discovered that Winters and two other individuals, Enalisa Blackman and Michael Ifeanacho, planned to buy drugs," the City said. "The drug deal was set up at the apartment complex where Blackman met two individuals to purchase a couple ounces of marijuana."

According to arrest affidavits obtained by KVUE on Dec. 1, Blackman – who the affidavit states is Winters' girlfriend – told officers that she, Winters and Ifeanacho set up the drug deal on Snapchat, planned on having the drug dealer "bring a zip (ounce of marijuana)" and were going to take the marijuana without paying the drug dealer.

The affidavits stated that the three planned the setup together, where Blackman said she would meet the drug dealer in the hallway of building No. 4. The documents state Winters and Ifeanacho planned to hide in a utility closet to come out and take the drugs should Blackman not be able to herself.

Ifeanacho gave the same account to police as Blackman, according to the arrest affidavits. Ifeanacho told police he had armed himself with a stun gun and pepper spray for the robbery.

Blackman and Ifeanacho, both 20 years old, were arrested and charged with capital murder, the City said. They are both being held in the Hays County Jail.

On Feb. 25, authorities arrested 19-year-old Christopher Williams, the alleged shooter. After firing his gun during the drug deal gone bad, police said Williams and others fled to Austin, where he threw the gun in Lady Bird Lake, according to the warrant for his arrest.

Williams was arrested at a residence in Manor, Texas, by the U.S. Marshals.

Credit: U.S. Marshals
A 19-year-old identified as Christopher Williams has been arrested in a Texas State football player's death.

Winters did not play in any 2020 games as he was recovering from a torn ACL he suffered in fall camp, according to KVUE media partner The Austin American-Statesman.

According to the Texas State football website, Winters was named an honorable mention at the All-Sun Belt conference in 2019. He played 11 games and started nine contests. He also recorded 52 total tackles with 30 solo stops, broke up four passes and opened his collegiate career with a career-high of eight tackles at Texas A&M.

Remember to tell people you love them every day. Once a Bobcat, always a Bobcat. #EatEmUpForever #LongLive1

Coach Jake Spavital released the following statement on Nov. 25 in wake of the news:

"Our Texas State University football team is deeply saddened by the death of our team member, and friend, Khambrail Winters. I met with players this morning to share the news about Khambrail. We will stand together as a team and support one another during this very difficult time. Our thoughts and condolences are with Khabrail's family and loved ones.

Khambrail's death is part of an ongoing San Marcos Police Department investigation into an incident that occurred off-campus last night.

We are waiting for more details to be released before we can comment further. The coaches and I are meeting with the team to discuss how we will proceed for the rest of the week."

The football player was originally from Houston, where he played at Alief Taylor High School.

The Alief Taylor Football program is deeply saddened by the passing of our former DB and TX State DB Khambrail Winters. We will remember is extraordinary athletic abilities, but most importantly we will remember his kind heart, and easygoing personality. A true Alief Legend. RIP pic.twitter.com/ZnOiFePxs0

His former high school released the following statement on Twitter on Nov. 25:

"The Alief Taylor Football program is deeply saddened by the passing of our former DB and Texas State DB Khambrail Winters. We will remember his extraordinary athletic abilities, but most importantly we will remember his kind heart and easygoing personality. A true Alief Legend. RIP"

Texas Longhorns wide receiver Brennan Eagles, who was a high school teammate of Winters, took to Twitter in light of the news: