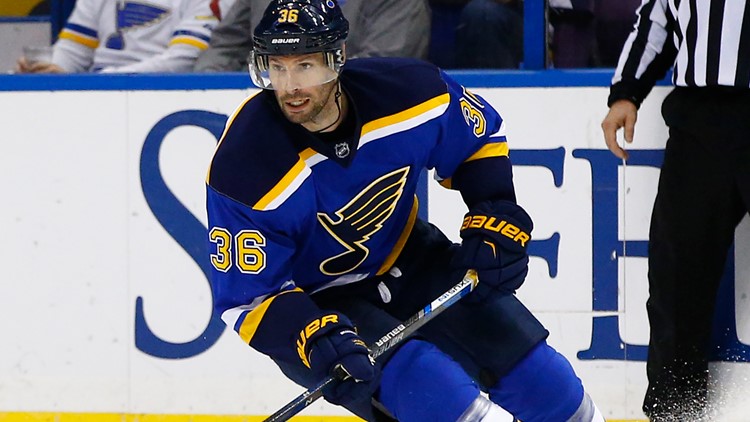 ST. LOUIS — The St. Louis Blues have had moving parts in and out of the lineup for weeks now thanks to injuries and now suspensions.

The team will have even more changes for their Monday game against the Predators in Nashville.

The travel via issues have been resolved for Troy Brouwer, and he’s been approved to play against the Predators. The team announced Monday that he is now on the active roster.

Rookie Klim Kostin, who just scored his first NHL goal on Saturday, is on his way back to the AHL in a corresponding move.

There’s not usually too much excitement surrounding a professional tryout in the NHL, but for Brouwer’s there was.

Only memories of excitement and thrill come to mind for Blues fans when thinking of his contributions to the team in the 2016 playoffs. The emotions surrounding his Game 7 game-winning goal against the Chicago Blackhawks will never fade.

After dropping the game on Saturday to the Predators, it’s a good time for Brouwer to jump in and provide a strong veteran presence against a physical team. Brouwer said this team plays a similar style of game to when he last played for the organization by being hard on the puck, and hard on the forecheck.

He said the advantage to this team is that there are younger legs on the ice, and more confidence. That confidence will come after winning a Stanley Cup title.

But the younger players' endurance is a big part of what’s paying off for the Blues right now despite continuous injuries. With players going down who log a lot of ice time, it’s become imperative that younger players step up and take advantage of more playing time.

On Monday the blues recalled two players from San Antonio. The first being 25-year-old Nathan Walker.

He signed as a free agent with the team on July 1 and currently ranks third among AHL forwards with 12 goals and 10 assists.

And after the Robert Bortuzzo suspension announcement, the Blues recalled 25-year-old defenseman Derrick Pouliot from the AHL.

Pouliot isn’t new to the NHL scene. He’s dressed in more than 200 career games and could add a strong presence when needed.

Pouliot leads all AHL defensemen this season with 18 points. Another offensive-minded defenseman on the roster, which always pays off.

This is one thing the Blues didn’t deal with as much last season. Sure, the team sat in last place in the league for a period of time, and Mackenzie MacEachern was on a plane almost every other day for weeks.

But, now, there are multiple players getting the chance to become an every day player.

Something that didn’t seem as likely at the start of the season.

RELATED: Next man up mentality has Blues winning despite key players missing