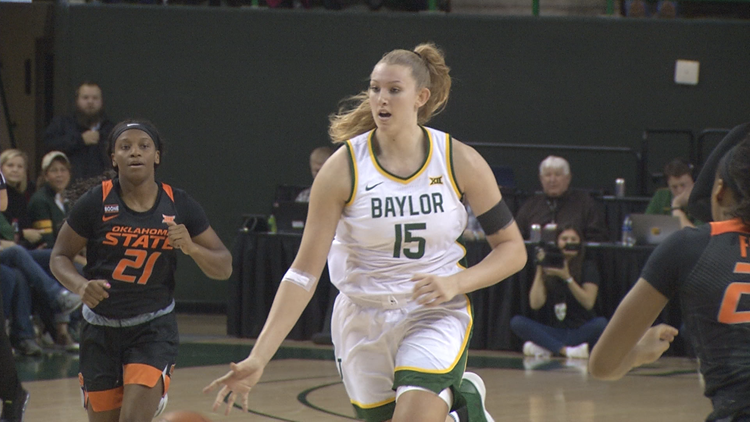 Photo by: Kurtis Quillin/KCEN
Lauren Cox (15) dribbles down the court after a rebound as No. 6 Baylor faces Oklahoma State in a Big 12 Conference women's basketball game at the Ferrell Center in Waco. The Lady Bears beat the Cowgirls, 94-48, for their sixth consecutive win.

Cox became the fifth Baylor player to earn first-team honors from the USBWA, and it marks the 11th time a Lady Bears has earned first-team.

The senior from Flower Mound averaged 12.5 points, 8.4 rebounds, 3.6 assists and 2.7 blocks in 22 games in the shortened 2019-20 season. All in all, it marks the seventh postseason national recognition for Cox and second this season.

Cox finished her career with 1,570 points, 982 rebounds, 363 assists and 301 blocks in 131 games played. The All-America honor adds to her list of postseason awards.

She was named Big 12 Player of the Year, All-Big 12 First Team and was selected to the All-Big 12 Defensive Team by both the Big 12 head coaches and the Waco Tribune-Herald. Cox was also named the Texas MVP by Dave Campbell’s Texas Basketball.

Cooper, a graduate transfer from South Carolina, earned her second national postseason award along with the AP’s honorable mention All-America nod Thursday. She led Baylor in total points with 408 averaging 13.6 per contest while adding 4.6 assists and 1.8 steals per game.

She shot a career-best .415 from beyond the three-point arc and led the Lady Bears with 56 treys made. Cooper was also named Big 12 Newcomer of the Year by the league’s head coaches and the Waco Tribune-Herald along with first-team All-Big 12 honors from both entities.