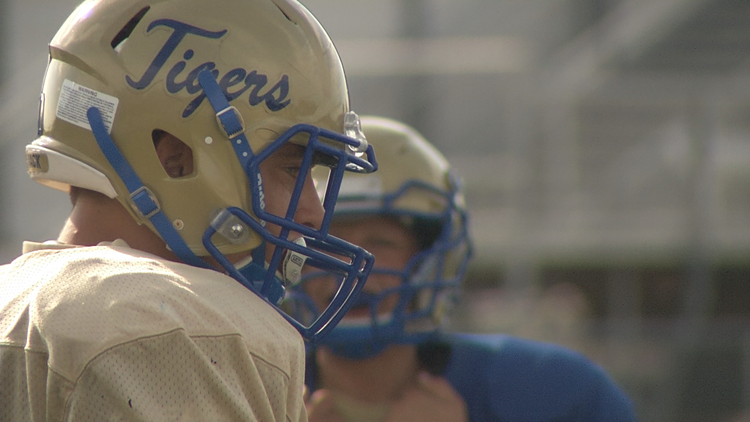 TEMPLE, Texas — It's one of the few times high school coaches get nervous, mad, excited and everywhere in between that doesn't involve breaking down film or making in-game adjustments.

The University Interscholastic League (UIL) will release its alignments for the 2020-22 extra-curricular cycle Monday at 9 a.m. It does this every two years, in order to ensure schools are competing against schools of comparable size in everything from football and basketball to band and one-act play.

But, in 2018, the most interesting things that happened for teams in Central Texas were Bruceville-Eddy dropping from 3A Div. II to 2A Div. I and sending La Vega, China Spring and Gatesville from a district in Region IV (typically for south Texas teams) with Austin-area teams to one with Stephenville and Brownwood in Region II.

But in 2020, we already know it's going to get a lot more wild and infinitely more whacky, especially in Classes 3A and 4A.

Starting in 4A, particularly Div. I, La Vega is now on an island. China Spring and Gatesville, thanks to several 5A schools dropping into 4A, are dropping from 4A Div. I to 4A Div. II.

Long known as a "regional floater" (school which, due to its geography, changes UIL regions regularly), La Vega could go several directions.

One option is to the Austin area with teams like Taylor, Lampasas and Burnet. In fact, from 2016-18 Burnet, Lampasas and La Vega were in the same district (District 13-4A Div. I). Another is sending the Pirates north with Fort Worth ISD schools (Diamond Hill-Jarvis, Carter-Riverside, Dunbar, Eastern Hills, Western Hills), Kennedale, Lake Worth and Benbrook.

That district would, in all likelihood, minimize travel for the Pirates' football program during district play. However, that could put La Vega in a nine-team district, only allowing two non-district games which is the same struggle the Central Texas 6A schools (Waco High, Midway, Temple, Belton, Harker Heights, Killeen, Ellison, Shoemaker and Copperas Cove) have been in since 2018.

In 2018, UIL sent Midlothian Heritage and Waxahachie Life east with Athens, Crandall, Mabank and Quinlan Ford. But, Quinlan Ford is dropping to Div. II and Crandall is jumping to 5A Div. II.

That same alignment is when we saw the local Div. I district as:

While La Vega's predicament only affects football, athletically, it's still a fascinating situation for the Pirates and UIL alike.

China Spring and Gatesville, again, are dropping to 4A Div. II. Lorena and Fairfield are both dropping to 3A Div. I, opening two spots in the local Div. II district, which since 2018 has been:

Jarrell, just 13 miles from Salado High School, is jumping from 3A Div. I to 4A Div. II. It's hard to picture the UIL not keeping Salado and Jarrell together, because of how close the schools are to one another.

From 2014-16, Salado was in a district with La Grange and Giddings, which are both staying in Div. II. A district foe of those, Caldwell, is dropping to 3A Div. I, as well.

If the UIL merely added Jarrell, China Spring and Gatesville to what's left of the local Div. II district, it would then have eight schools, meaning seven district games. Should it replace Madisonville, too, it would be the same number of schools in a smaller geographic area as it's been since 2018. Then, Madisonville could, in theory, take Caldwell's place and go with Bellville, Giddings, La Grange, Royal and Smithville.

Dropping to 3A Div. I, Fairfield is likely going to go with Teague, as the two are less than 11 miles apart. Plus, it's not hard to imagine Grandview, another regional floater, getting sent elsewhere.

But, Fairfield and Teague could either stay in a district with West (which has previously included East Texas teams like Malakoff, Eustace and Elkhart) or go east altogether. But Fairfield's drop will force the UIL to move one of its Region III boundaries.

Lorena and Caldwell are the more interesting ones in 3A Div. I. Because of proximity to Cameron and Rockdale, it's hard to imagine Caldwell not going with the two, especially because Franklin is dropping back to 3A Div. II.

At that point, would the UIL send Troy and Lorena into a district with West, Groesbeck and Whitney? Or would it sent Lago Vista back with San Antonio-area teams like Luling, Marion, Imgram Moore and the two military installation schools (Cole HS on Fort Sam Houston and Randolph Field HS on Randolph Air Force Base)?

The factor which makes Lago Vista the key piece in what happens to Cameron Yoe, Rockdale and Caldwell: Manor New Tech is also jumping to 4A Div. II.

I would project Lago Vista getting sent back into Region IV, replacing Ingram Moore in District 13, as Ingram is dropping to Div. II. At that point, adding Caldwell and Lorena (to join Troy, Academy, Cameron Yoe, Rockdale) could actually reduce travel for everyone involved and likely open the door for McGregor to get moved back into the southern district, where it was until 2018.

Since that same time, the area 3A Div. II schools have all been put together, instead of Clifton being sent to Dallas and Rogers to Comfort, because Bruceville-Eddy dropped.

Hamilton, though, is dropping to 2A Div. I and will likely just replace Hico, which is dropping to Div. II. Riesel is making the jump from 2A Div. I to 3A Div. II. With Franklin dropping, it's hard to project anything other than this district moving to:

That alignment would also make scheduling way easier for Clifton, Rogers, Florence and Lexington, as it would eliminate the need to find a sixth non-district game and provide the entire group the opportunity for a district-wide Week 6 bye.

But, as the UIL has to look at this as one giant statewide puzzle and not just one geographic area of the state, anything is possible when the packets finally become public at 9 a.m. Monday.