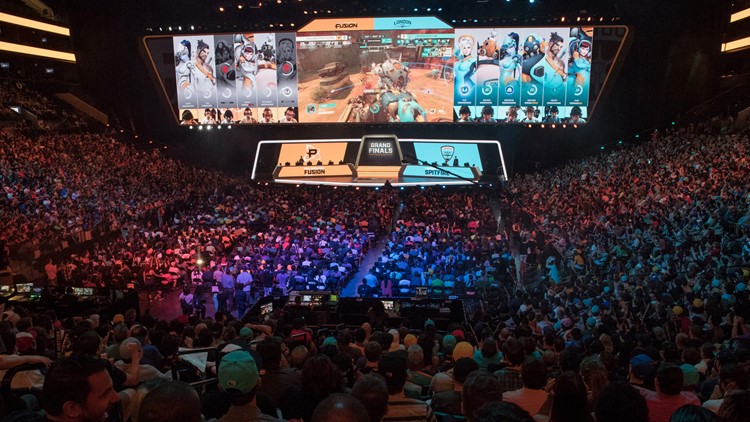 Photo by: AP
FILE - In this July 28, 2018, file photo, fans watch the competition between the Philadelphia Fusion and the London Spitfire during the Overwatch League Grand Finals, at Barclays Center in the Brooklyn borough of New York. Overwatch League Commissioner Nate Nanzer is leaving the competitive video game circuit to oversee esports competition for Fortnite publisher Epic Games. Nanzer tweeted Friday night, May 24, 2019, he was moving on from Activision Blizzard, the company behind the Overwatch game and league, for a “new opportunity.” He didn’t provide further details or a firm timeline except to say he’ll be leaving “soon.” Epic Games tells ESPN they will hire Nanzer to help turn the world’s most popular video game into a viable esport. (AP Photo/Mary Altaffer, File)

2 ways esports are taking over the DMV

WASHINGTON — Brace yourself, gamer or not, esports are taking over D.C., Maryland and Virginia at a rapid pace. Legislators have been welcoming the multi-million-dollar industry to our area and are hoping to ride the success of the sport, not get crushed by it.

Esports are being implemented into high schools, sports betting, and even pop-up bars.

For those not in the know, esports are when professional gamers compete in tournaments of video games - often for big prize money.

Washington D.C. already has its own professional team of gamers, known as the Washington Justice. They are focused on the game Overwatch.

As esports grow in popularity worldwide, the impact can be seen right here in the DMV in the last few months.

In Virginia, education leaders launched a one year pilot program to incorporate esports into all state athletic departments, according to the Washington Post. Virginia will be the ninth state to recognize video games as a high school varsity sport.

Gone are the days of discouraging kids from spending all day playing video games - for some, it's now their homework. If they're good enough, they will even have opportunities to get scholarship money for college.

RELATED: A Gym For Gamers: A look at the budding ESports industry in DC

People have taken notice in how much money can come from esports. Professional teams that win official competitions make thousands of dollars.

There is already speculation that once sports betting is legalized in DC, esports will be one of the most lucrative sports to bet on.

Back in April, Maryland’s Governor Larry Hogan signed the Esports Act, which will go into effect in October. This was to clear up confusion if esports competitions counted as gambling in the state.

Under the new law, esports competitions will be defined as, “…one involving video games, including first-person shooters, real-time strategy games, and certain multiplayer online battle arenas.” The bill authorized prize money for competitions and regulations made by a controller.

The success of esports started in Asia, and America is still catching up with its popularity. However, if the sport’s success keeps its current momentum, it won’t be long before Americans are heavily invested in the sport everywhere.