The rain started to transition into snow in the Flagstaff area a little before 5 p.m. Wednesday. 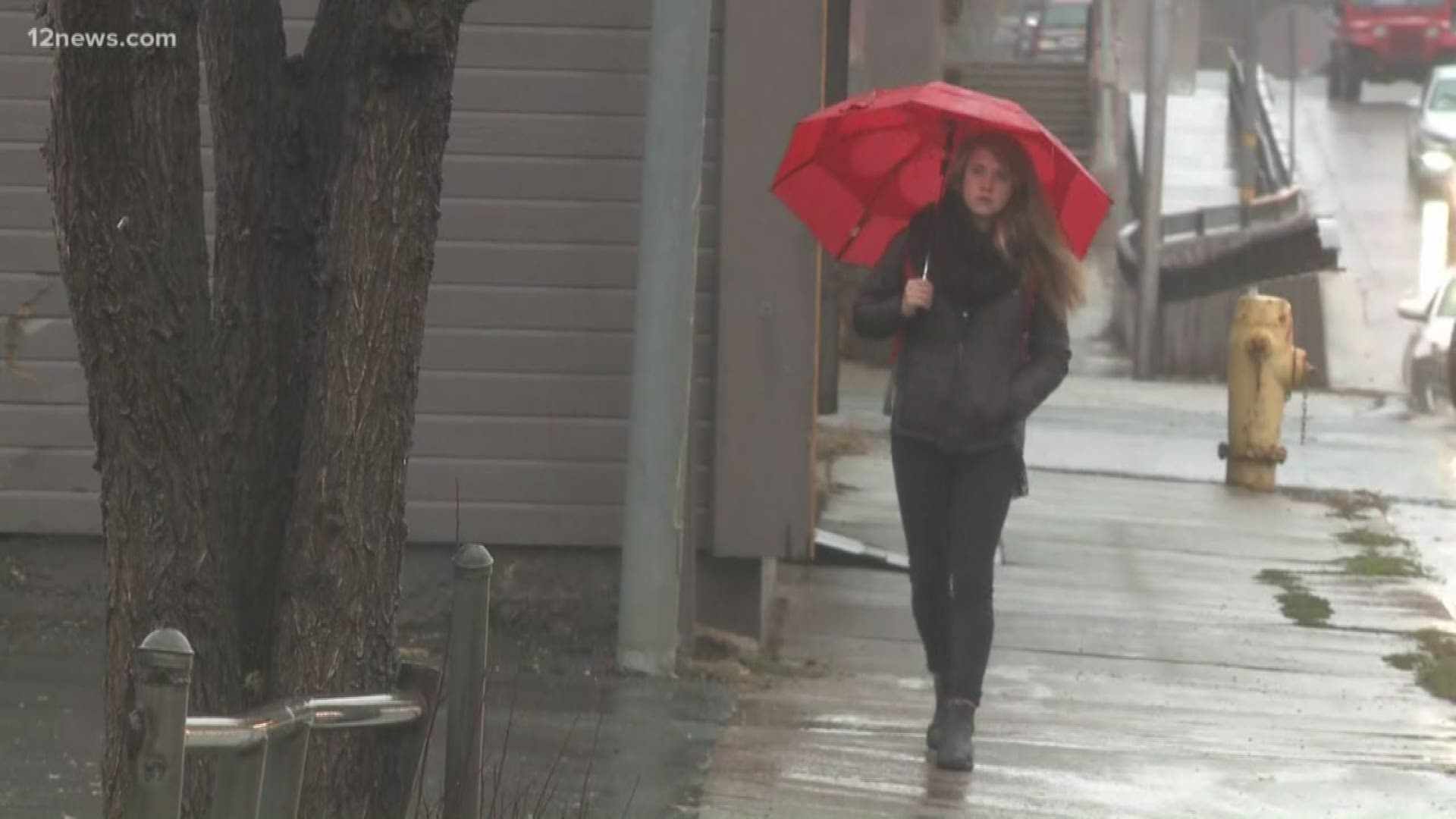 PHOENIX — After a day full of the wet stuff falling across most of the state Tuesday, the Valley received some more Wednesday. Up north, the rain turned to snow.

The rain started to transition into snow in the Flagstaff area a little before 5 p.m. Wednesday. Flagstaff could see up to 9 inches of snow with this storm that will last through Thursday.

The ski resorts in Arizona could receive nearly two feet of snow.

In the Valley, we'll see some spotty showers Thursday morning as we begin to dry out. Most of the rain should be to the north and east of Phoenix by Thursday afternoon.

PREVIOUSLY: Rain falls in Arizona, more on the way

Rainfall totals in Phoenix from this stormy event could top all of Monsoon 2019. There were multiple reports of flooding and hail on Wednesday, especially to the north of Phoenix. 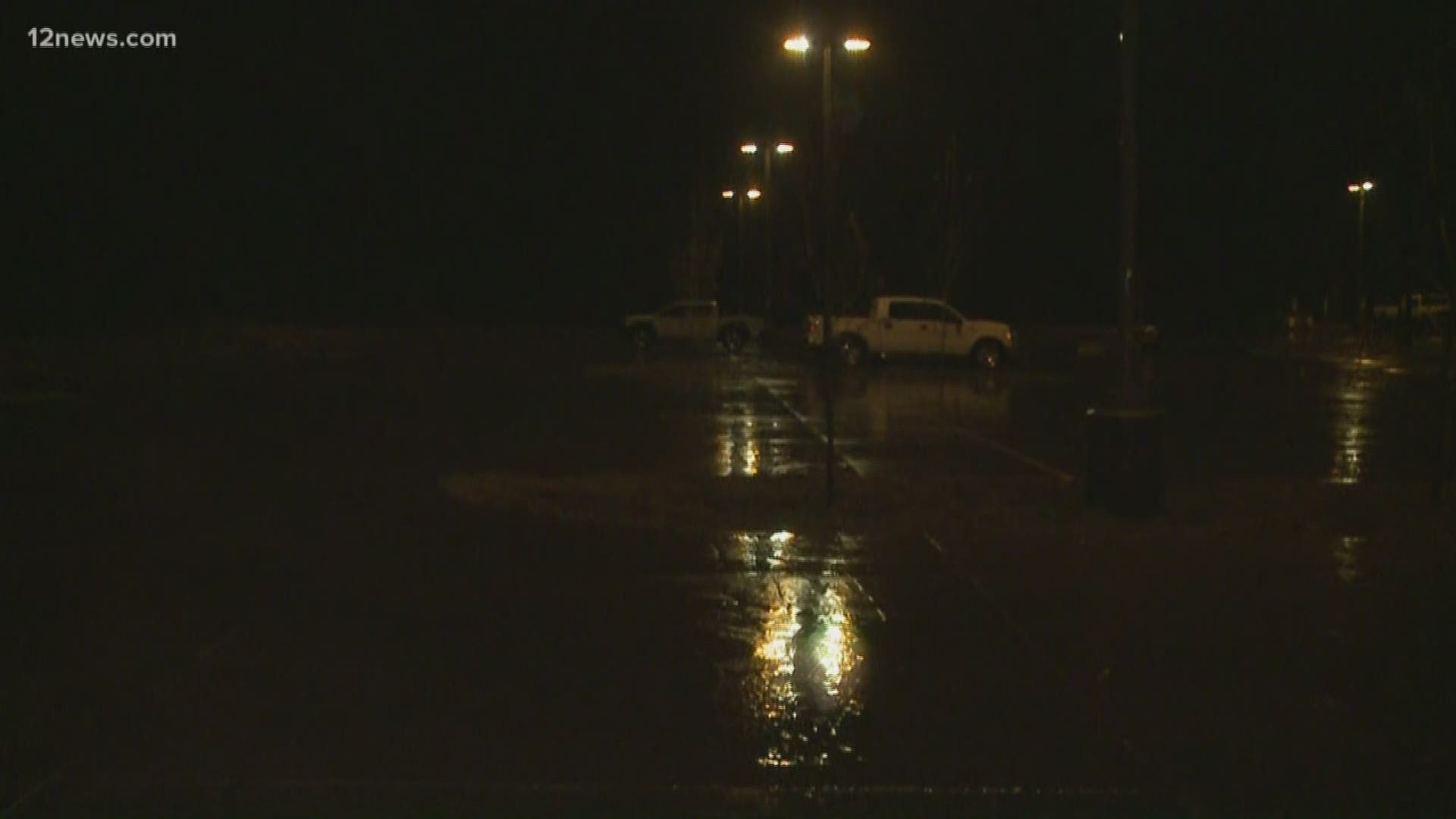 People in Flagstaff have also been getting ready for the first snow of the season. Evan Reimondo stopped by HomCo Lumber and Hardware Wednesday morning to pick up essentials like snowmelt, salt, and a water heater cover.

“Trying to stay on top of it, hopefully stay ahead of it because the first snow usually catches you off guard a little bit,” Reimondo said.

But overall, people are hopeful to have moisture back in the High Country.

“I’m excited for the snow to come, it’s that season and it’s been dry for a long time,” Dustin Phillips said.

Make sure you have the 12 News app downloaded so you get severe weather alerts as we prep for the storms.

8:48 p.m. - Snow may fall in elevations as low as 5,500 feet tonight through Thursday. NWS says snowfall rates could reach 2-3 inches per hour at times.

Expect near whiteout conditions on I-17 and I-40 at times.

7:57 p.m. -  State Route 74 is closed in both directions between I-17 and Lake Pleasant Parkway due to water on the road.

7:50 p.m. - Expect slick conditions on I-40 near Bellemont. An ADOT camera shows snow on the road.

6:56 p.m. - Daisy Mountain fire crews helped rescue people from the wrong side of a flooded wash near 24th Street and Cloud Road north of Carefree Highway.

Firefighters said three people were in the pickup truck as it was being carried down a flooded wash. The water was up to the windows.

6:02 p.m. - Westbound Greenway Road under I-17 is closed because of flooding. ADOT says the eastbound lanes are still open.

5:50 p.m. - Washes are flowing in the New River area after several rounds of storms. A flash flood warning is in effect until 9:30 p.m.

Black Canyon City, Cordes Lakes and Spring Valley are also still under a flash flood warning. That one ends at 8:45 p.m.

5:08 p.m. - The rain continues over the West Valley as it moves toward downtown Phoenix.

4:40 p.m. - Snow is starting to mix in with the rain around Flagstaff.

4:19 p.m. - A fast-moving storm is dropping heavy rain in the West Valley. At 4:12, the storm's core was over Grand and Northern avenues in Glendale. The NWS has gotten reports of pea-size hail with this storm.

NWS said they saw wind gusts of 40 and 43 mph with the storm.

Some areas of the Valley have seen over an inch of rain Wednesday. An area near Loop 101 and Bell Road in the West Valley has recorded over two inches of rain.

Heavy rain continues in the West Valley and a dry period in the East Valley will change this afternoon, according to NWS Phoenix.

Storms are beginning to flare up again in the Valley. According to NWS Phoenix, Gila Bend has picked up .51 inches of rain in the last hour.

NWS Phoenix says there's a "lull at the moment" but more storms and showers are "increasing in coverage once again."

A flash flood warning is in place for areas in the Valley including Glendale, Paradise Valley, and Cave Creek.

NWS Phoenix says there's been "numerous reports of street flooding around the Valley."

Flooding is obstructing on and off-ramps at I-10 westbound at Citrus.

Phoenix is up to .14 inches of rain for Wednesday, according to NWS Phoenix. A flood advisory is in effect for areas in the West Valley as "very heavy rain" is moving over the area.

NWS Phoenix said Phoenix Sky Harbor picked up an additional .03 inches on top of Tuesday's rain. More is coming throughout the day.

ADOT said troopers responded to "several" weather-related crashes on I-40.

A "band of light to moderate rain" is expected to move through the Valley through about 7 a.m., according to NWS Phoenix.

Light to moderate rainfall continues to move north over the I-40 between Flagstaff and Holbrook.

"Watch out for these wet roadways if you are traveling or commuting to work this morning," NWS Flagstaff tweeted.

According to the National Weather Service in Phoenix, showers and storms will pick up across the Valley by sunrise Wednesday morning before a brief break.