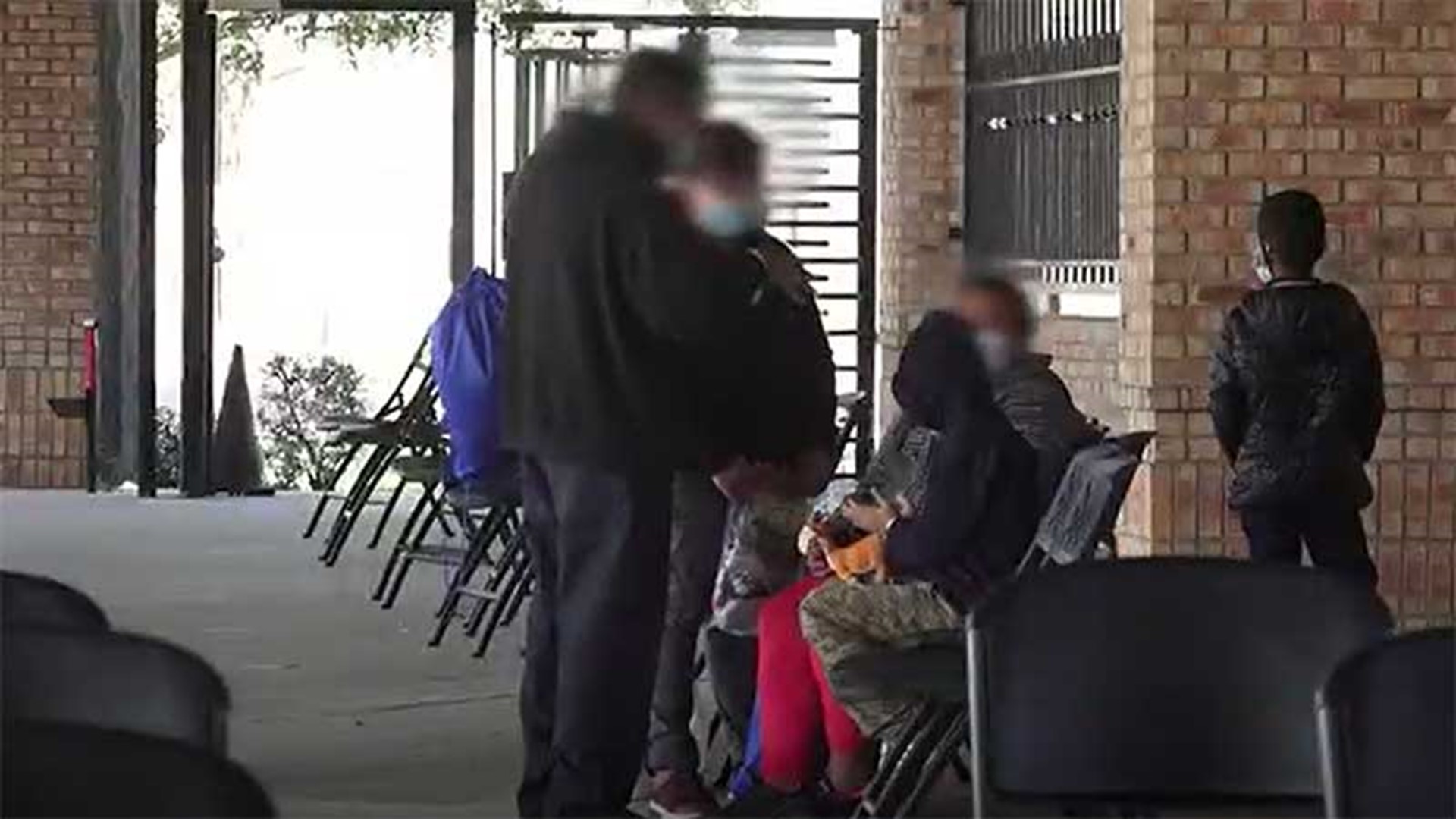 MCALLEN, Texas — Holding her young daughter, 18-year-old Ana from El Salvador said she made the month-long journey to McAllen, Texas for her child.

KHOU isn't identifying Ana and isn’t using her last name to protect her identity in case her life is in danger in her home country.

“More than anything, I did it for my daughter,” she said in Spanish. “Because over there, she can’t have the same things she can have here.”

The reasons for coming to this country don’t change based on who’s in the White House.

“I want to find a job so I can work for my little girl,” Ana said.

People like Ana still make the journey and in recent weeks, hundreds of undocumented immigrants who crossed into the United States were apprehended by Border Patrol and then released into the communities in the Rio Grande Valley, according to nonprofit organizations that work with the population and the City of Brownsville statistics.

“For the last year and a half, since MPP (Migrant Protection Protocol, a Trump Administration policy of having asylum seekers wait for their court date in Mexico) began, our numbers in the bus station have been very limited. We've gotten maybe five or so a day from the detention centers and then we've got no families at all,” said Andrea Rudnik, a volunteer is with Team Brownsville, a group of volunteers who provides humanitarian assistance to asylum seekers on both sides of the border.

They help those who are living in Mexico under MPP as well as migrants on U.S. soil.

In the U.S., Team Brownsville provides food, backpacks with supplies and support for the undocumented immigrants to get to their destinations from the city’s bus station.

“Now, the numbers are looking like they're starting to climb 60, 70. And CBP actually told us that they have more families on the way,” Rudnik said.

On Tuesday, a press release from Gov. Greg Abbott’s Office said Abbott met with Col. Steve McCraw, Director of the Texas Department of Public Safety, to discuss safety and security along the Texas border.

The Governor and Colonel McCraw discussed a recent surge of immigrants at Texas’ southern border and noted that this influx is related to the Biden Administration’s reinstatement of the “catch and release” policy.

KHOU 11 asked U.S. Customs and Border Protection for a day-by-day breakdown of apprehensions and releases starting Jan. 1 and running through Feb. 7. We also asked if CBP has released more migrants into the community between January 2021 and early February compared to November and December of 2020. CBP provided a link to its statistics page as well as this statement.

“CBP has seen a steady increase in border encounters since April 2020, which, aggravated by COVID-19 restrictions and social distancing guidelines, has caused some facilities to reach maximum safe holding capacity. Per longstanding practice, when long-term holding solutions aren’t possible, some migrants will be processed for removal, provided a Notice to Appear, and released into the U.S. to await a future immigration hearing. As the Administration reviews the current immigration process, balancing it against the ongoing pandemic, we will continue to use all current authorities to avoid keeping individuals in a congregate setting for any length of time."

“They started coming in on January 27, 2021,” said Felipe Romero, Director of Communications and Marketing for the City of Brownsville.

Romero said the city set up a check-in station and a waiting area as the migrants wait to board buses. According to the statistics provided by Romero, from Jan. 27 through Feb. 8, the city processed 653 people.

“There is a gap between January 31 until we received the tests this weekend where we did not have COVID tests to provide,” Romero said.

The information on COVID testing for people who cross the border is inconsistent at best.

U.S. Customs and Border Protection didn’t answer KHOU11’s questions about testing. A CBP agent working along the Texas-Mexico border, who asked us not to name him because he was not authorized to speak publicly, said the agency didn’t test unless someone showed symptoms or needed medical attention.

In McAllen, nonprofits like Catholic Charities of the Rio Grande Valley say they test as they take people into their shelter.

“From my understanding, they are not testing everybody,” said Sister Norma Pimentel, Director of Catholic Charities of the Rio Grande Valley. “That's why we want to make sure that they do not have the virus. So, we're testing.”

Pimentel is the person to ask about what’s going on in the Valley.

“What we're seeing, presently, is that many of the people arriving to the border, entering the country through points of entry, they are being released again into the United States only because Mexico has changed their policy as to allowing family units to be released into Mexico that are not from Mexico. And so, therefore, they are now being released into the United States like they were previously like in 2014,” Pimentel said. “This is not because the administration, present administration, has changed in any way. They're working to make those changes, but they have not yet put goes into effect.”

“We are a social action agency here on the U.S.-Mexico border,” Corbett said. “We do advocacy, research and education on U.S.-Mexico border issues and we're also involved in the humanitarian response to the arrival of migrants here to the border.”

“We think it's limited and contained to South Texas,” he said. “Here, in Ciudad Juarez and El Paso or all the way in the west western part of Texas, it's been different. We haven't seen yet the processing of migrants and asylum seekers to the border. On the contrary, we have seen efforts on the part of our local agencies to increase deportations.”

“It appears that what's happened in the last week is that Mexico is beginning to push back and not permit everyone to be returned,” he said. “It's episodic. It's sporadic. We don't know exactly what's happening. But the fact is that the Biden Administration very quickly is going to have to get a handle on this.”

To fully understand what Pimentel and Corbett and others described to KHOU 11 as “Mexico pushing back” and not accepting the immediate return of certain migrant groups, KHOU 11 reached out to the U.S. State Department, the Department of Homeland Security, its Mexican counterparts and the White House.

No one provided us any answers.

The State Department spokesperson said the agency didn’t comment on diplomatic communications with other governments.

“The United States seeks to implement a comprehensive, long-term plan to manage migration challenges throughout the Western Hemisphere, including those within our own immigration system,” a spokesperson wrote.

"The Administration’s policy is to protect national and border security, address the humanitarian challenges at the U.S.-Mexico border, and ensure public health and safety. We will work to safeguard the health and well-being of government workers, non-government organizations, migrants and asylum seekers, and families and communities. We will treat all involved with dignity and will work to reset the policies and practices for enforcing our immigration laws and to align enforcement of those laws with these values and priorities. Processing of asylum seekers at the U.S. border will not restart overnight. The Administration is committed to fair, orderly, and humane border processing, but it will take time for this to happen."

"The United States is a country with borders and laws that must be enforced. We are committed to providing safe and orderly processing for all who arrive at our border.

"The United States remains committed to working with governments in the region to address irregular migration and ensure safe, orderly, and humane migration."

KHOU 11 asked LUPE, a community organization that fights deportation, provides English classes and works to improve communities, what it has seen in the communities it serves.

"Though LUPE has not seen an increase in immigration consultations in 2021, we have seen a sharp increase in calls and questions from our members about President Biden’s immigration policies and campaign promises,” a statement read. “The Biden administration must act swiftly not only to undo the damage of the last four years, but also implement policies that keep families together, keep people out of cages, and allow all of us to thrive and live without fear. Our members are ready for action and will keep a close watch to hold President Biden to account."