This story will be updated throughout the day with details of Trump's visit.

People traveled from across the state and country to be in Dallas for a visit from President Donald Trump on Thursday.

By Thursday afternoon, thousands of people had lined up outside of the American Airlines Center ahead of the president's 7 p.m. campaign rally.

RELATED: Donald Trump and Beto O'Rourke are coming to North Texas at the same time. Here's what to expect

RELATED: How much will Donald Trump’s Dallas campaign rally cost the city?

Prior to his stop in Dallas, Trump spent time in Fort Worth and at a Louis Vuitton factory at Rochambeau Ranch.

Throughout the campaign rally, Trump spoke about the economy, Turkey, former Texas governor Rick Perry, Sen. John Cornyn, Beto O'Rourke, the "crooked" media and more, all while protesters for the president and Antifa protestors clashed outside.

Read on for a full running blog of the event as it happened.

President Trump has concluded his remarks and is leaving the AAC.

Dallas Police have formed a barricade around Antifa protesters that placed themselves amongst Trump supporters in Victory Park. Police are now separating them.

"What a job you've done, thank you," Trump said of Perry, who was in attendance at the AAC.

Trump said Perry's last day in office will be Dec. 31.

Dallas police have released more information on the arrest made earlier tonight outside the AAC.

Dallas police working the rally were made aware of an armed man wearing body armor around 6:30 p.m. Police discovered he had a license to carry the weapon. The man was taken into custody and transported to an area hospital for an evaluation.

There were no reported injuries in this incident, police said.

As Trump spoke at the "Keep America Great Rally" protestors lined the streets outside the AAC. 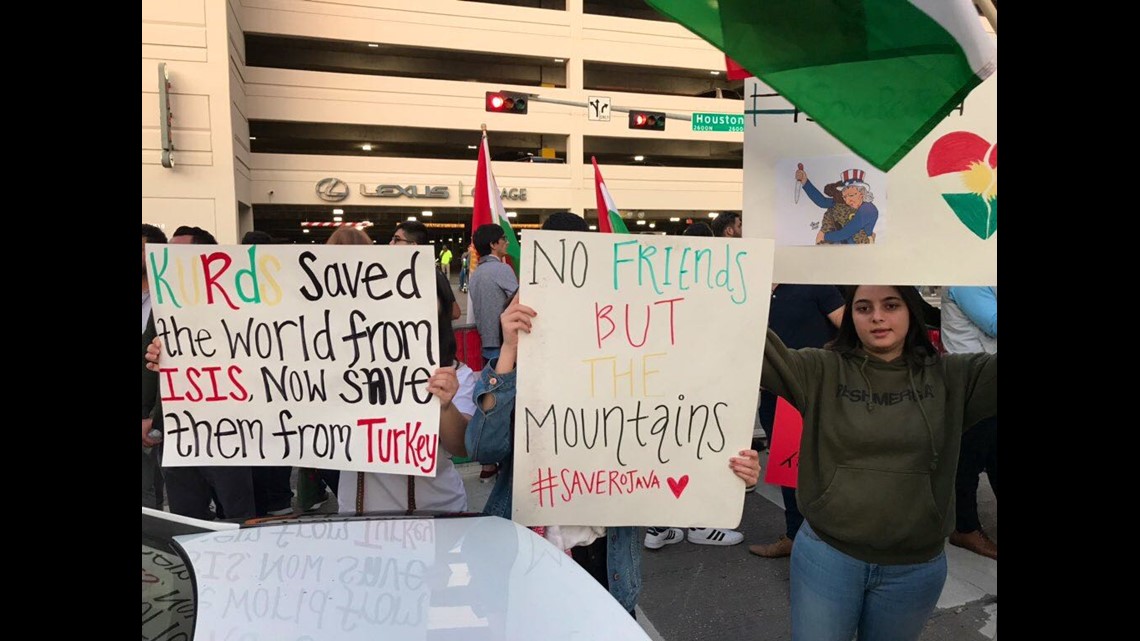 Trump has taken the stage at the AAC.

Dallas police have arrested a man who had a weapon and body armor outside the AAC. Sources say he was detained after officers spotted a weapon. He is being taken in for a mental health evaluation.

InfoWars' Alex Jones is also outside the AAC. He is driving around outside the building shouting that the deep state is trying to assassinate the president.

Jones is a known conspiracy theorist who has called the Sandy Hook shooting a hoax. He’s been sued by parents and lost an appeal this week.

The presidential seal is now on the podium at the AAC. The president has arrived but is not on stage yet.

The music is louder than any rock concert I have ever attended.

The crowd is doing the wave awaiting the president.

Tens of thousands of people have waited hours to get inside Trump's rally at the AAC. Dallas police said many people won’t get in. Dallas Fire Marshals are monitoring the situation.

People packed Houston Street for blocks near the AAC.

A small group of protesters showed up to protest the Trump visit. Dallas police have a huge contingency of officers ready, including a SWAT team and Mounted patrol.

Trump has arrived at the AAC.

The lower bowl at the American Airlines Center is filled to capacity ahead of President Trump’s campaign rally tonight in Dallas.

The event began around 5 p.m. with an invocation followed by the pledge of allegiance, led by Robert Jeffress, a vocal Trump supporter and pastor of First Baptist Church of Dallas.

Senator John Cornyn and Lt. Governor Dan Patrick warmed the crowd up during the 5 p.m. hour. Patrick predicted tonight would be the most well-attended rally for Trump ever.

Both Patrick and Cornyn used language that evokes a lot of emotion — words like "revolt," "anger" and "danger." They said Democrats are the enemy of freedom and liberty. Patrick called Beto O’Rourke a moron.

Patrick said he told the president today that he will win Texas in 2020 by a larger margin than he did in 2016.

As we approach inside an hour until the President arrives for a “Keep America Great 2020” rally, a majority of seats in the upper bowl are empty with some a mix of seats open on the club level, and a good portion of the floor is open too.

There are still a lot of people outside the AAC, waiting to enter.

The line to get into the AAC wrapped around several city blocks. Protesters were few and far between at the most — the only conflict we saw was Trump supporters arguing with other supporters when someone cut in line. In fact, several fights almost broke out.

Hundreds were still waiting to get in around 6:30, and most waiting had spent at least 5 hours in line.

Speaking at the Louis Vuitton facility in Johnson County, President Trump said "great people, great company" of Louis Vuitton, and said he might bring some merchandise home to Melania Trump.

He began his remarks to a crowd of LV employees and French executives by talking about Syria and Turkey.

He then praised the LV brand.

“This is a great vision you had for the state of Texas and for our country,” he said to the executives from France. He said LV is a brand name he knows well — he’s spent a lot of money on it.

Trump praised Energy Secretary Rick Perry, who just turned in his resignation letter to the president. Trump said he and Perry chose a replacement together and referenced a "he" when referring to the replacement.

Speaking about the economy, Trump said that there are 10,000 new factories in the U.S.

“Under my administration, we believe we can build it, grow it, make it in the United States,” he said.

President Trump has arrived in Keene and is touring the Louis Vuitton facility.

When asked by press to comment on the shooting death of Atatiana Jefferson, the president said "It’s terrible. I think it’s a terrible thing."

Meanwhile, crowds were lining up inside the AAC.

The doors to the American Airlines Center opened almost an hour earlier than originally planned and Trump supporters began filing in.

People who had lined up overnight could be seen running to claim their front row spot for the rally.

Inside the arena, the stage is set up near the center of the floor, with a blue carpet stretching across to the podium where he will speak.

Staff say the arena has a capacity of approximately 20,000. 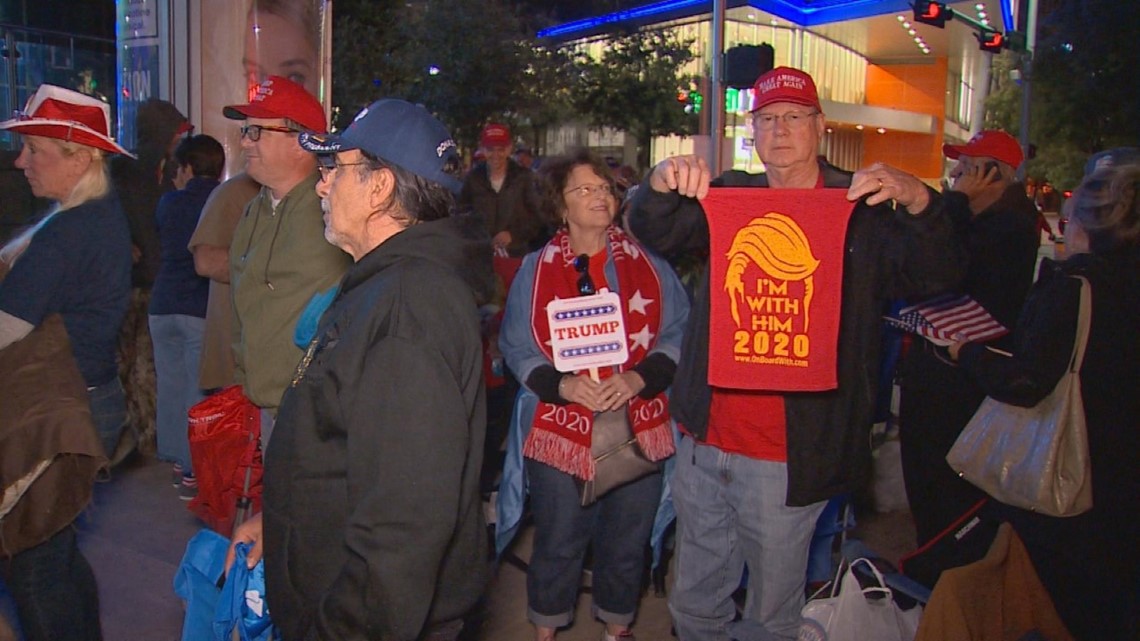 In the small Johnson County city of Keene, the mood was best described as “anticipatory,” said Chamber of Commerce President Paul Gnadt.

“Our phone at the Keene Chamber’s been ringing off the hook with people calling from as far away as Georgia, certainly south Texas, Illinois, Oklahoma, wanting to know how they can see the president,” Gnadt told WFAA.

He said the Chamber put out all of their 337 American flags to line Keene’s main street because it felt like a special occasion. The president was expected to visit and help cut the ribbon at the new Louis Vuitton facility in unincorporated Johnson County near Keene.

People like Windel Clark from Fort Worth made the trip to Johnson County in hopes of getting a glimpse of the motorcade.

“Just so I can have a chance to see a president,” Clark said. “Just once in a lifetime, and this is a different president.”

Outside the Louis Vuitton-Rochambeau Ranch on County Road 316, dozens of people gathered with American flags and Trump signs hours ahead of the president’s expected arrival.

After landing and disembarking Air Force One, Pres. Trump made his way to the crowd gathered at the base and spent time shaking hands and greeting some of the people gathered there.

His motorcade then departed for Fort Worth for his next event.

Air Force One touched down at Joint Reserve Base Fort Worth shortly before 1 p.m. on Thursday.