Constitutional carry and silencers: What you need to know about new Texas gun laws

Gov. Greg Abbott signed multiple new gun-related bills into law Thursday. But do they work the way you would think? 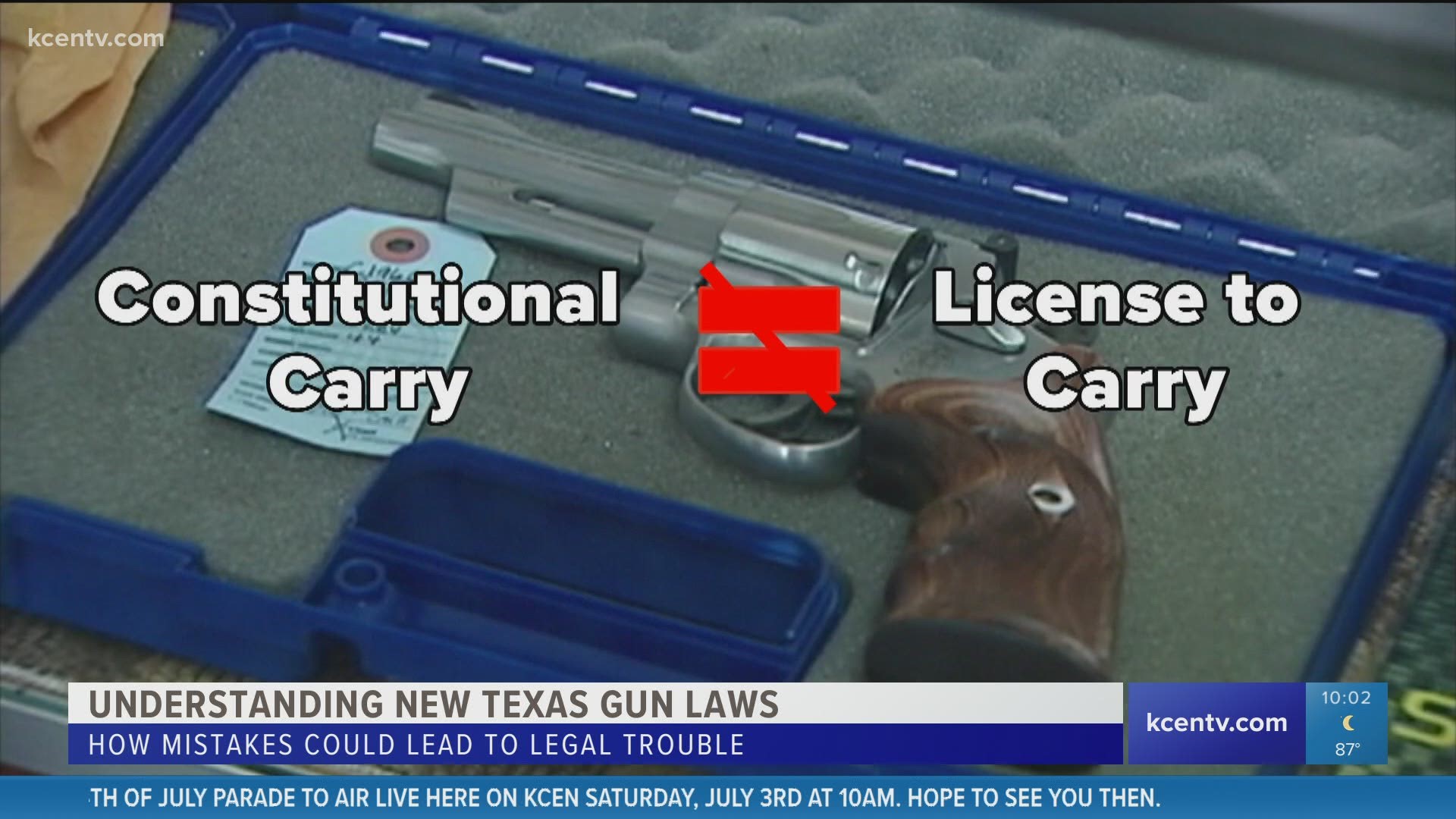 TEMPLE, Texas — Gov. Greg Abbott signed a slew of new gun-related legislation on Thursday. But how those laws were described, and how they will actually affect Texans, may not be exactly the same.

Here are some things all Texans need to know before they decide to take advantage of constitutional carry or the new Texas suppressor law.

At 11 a.m. on Thursday, Abbott held a news conference with the Lieutenant Governor, the Texas Speaker of the House, members of the Texas House and Senate and NRA Executive Vice President Wayne LaPierre among others. He signed seven bills into law.

“They built a complete barrier around gun rights in the state of Texas and [Thursday], I’m signing seven laws to protect second amendment rights in the Lone Star State,” Abbott said.

The first bill signed was for constitutional carry, which is intended to make it legal for individuals who are 21 years of age or older, and who can legally possess a firearm, to carry a handgun without first obtaining a license.

According to the Gun Owners of America lobbying organization, there are some important differences between constitutional carry and having a license to carry (LTC).

Businesses can choose to prohibit unlicensed carry by providing notice under Penal Code Chapter 30.05 even if they still allow concealed carry or carrying with a license. A general "no weapons" sign also still prohibits constitutional carry.

A LTC has a "savings clause" under Texas law that allows a person to avoid any legal penalties if they carried a handgun into a prohibited place but left as soon as you were given personal notice.

Constitutional Carry does not have this clause, and a person that carries a handgun where prohibited can be charged with a Class A misdemeanor or third-degree felony even if they leave immediately.

Additionally, while those with an LTC can take advantage of campus carry, those with constitutional carry cannot.

Abbott also signed HB 597 into law which states in part, "A firearm suppressor that is manufactured in this state and remains in this state is not subject to federal law or federal regulation, including registration, under the authority of the United States Congress to regulate interstate commerce."

Abbott said on Tuesday, "Any firearm suppressor made in Texas and that stays in Texas will not be subject to federal law or federal regulations."

Multiple sources told 6 News Friday this is, in fact, not true.

Brent Martin manages both the Hawkeye Shooting Academy and Czerka Armaments Research in Temple. Martin has an ATF license to build machines guns, short barrel rifles, short barrel shotguns and silencers. Customers can buy a silencer only if they register it with ATF.

It's not a simple process. The application requires a person to fill out a form, provide two passport photos, provide fingerprints and pay a $200 fee. If Martin were to sell to someone without them being registered he could lose his ATF license.

Martin said local law enforcement or DPS is not going to come after someone with a non-registered silencer, but the ATF could arrest that person at any time. The person could face up to 10 years in prison and a $100,000 fine. Martin worries someone will find out the hard way that Texas silencers aren't really protected.

"If someone goes and makes a suppressor, but doesn't fill out the paper work, they can be arrested," Martin said.

The State of Texas, or a citizen, could try to challenge this in court, but Texas A&M University Central Texas professor Jeffrey Dixon told 6 News it would not go well for the State.

"The first issue is that there is already a precedent from the 1990s that pretty on point," Dixon said. "Gonzales vs. Raich was a decision that said the federal government with its interstate commerce power could regulate the production and distribution of marijuana even in a particular state. California in that case."

Dixon said he thought the bills' authors were mistaken in thinking it would work to simply say that the silencer was made in Texas with Texas materials.

"I don't think that we are going to find any lower courts that are going to side with the state on this bill," Dixon said.

Dixon said a Supreme Court decision to support such a bill would have far reaching ramifications for the whole country if they overturned that precedent.

Anyone looking to buy a silencer is strongly encouraged to still register it with the ATF.