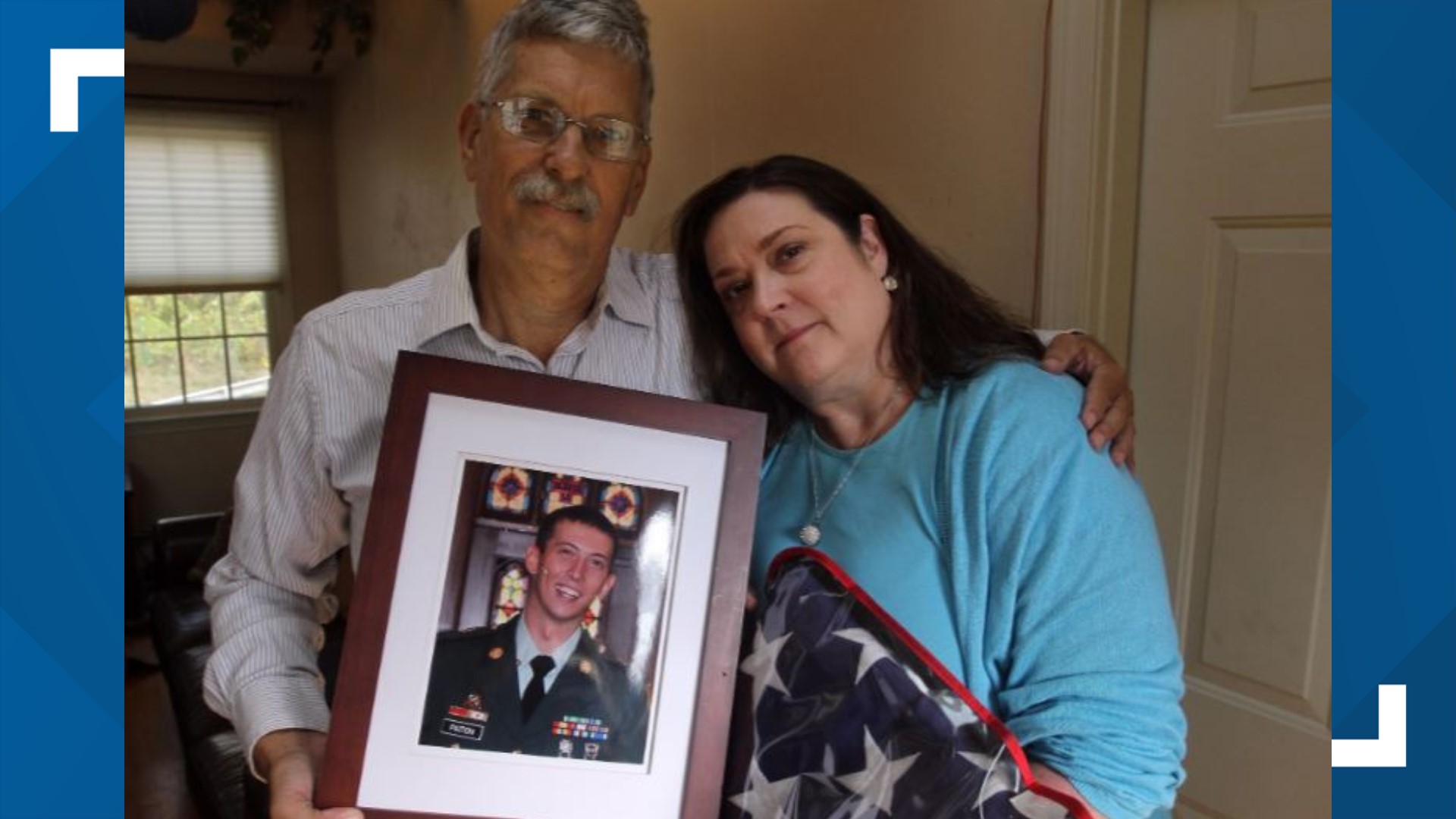 TEMPLE, Texas — This isn't the life that Lynn Patton asked for, wanted or thought would be her reality when her youngest son, Matthew, was born in March 1990.

"He, he was the smiley boy. He was just so happy as a child," Lynn recalled during a Zoom interview earlier this week, sitting on a black leather couch. "That's just how he always was but he was a daredevil."

It's the memories of her fearless son, his knack for being rambunctious and pushing himself to new limits every time she seemed to turn around, she still laughs about to this day. Matthew was a jokester and loved to show off every chance he could.

Lynn said he was the life of every moment.

"You know those little orange cars with the yellow roof that kids can go in and they just use their feet to roll along," she said with her eyes closed, chuckling and laughing as she plays out one of her favorite memories in her mind. "Well, my oldest son Evan, who's by the books and all that stuff, is in there like a normal person driving the car and he's going down the hill. Matthew comes running out and jumps and slides onto the roof and he's going flying down the hill and oh yeah, so Matthew. So Matthew."

As fun and jovial as Matthew was as a boy, he battled some serious mental health issues during his adolescent years. Matthew battled depression and demons, none of which Lynn and his father, John, had ever seen before.

"Starting in middle school, I do believe he was bullied a lot," Lynn told me. "I didn't even know about it until after he died. You find out a lot about someone after they die."

His significant mental health issues lead Matthew to attempt suicide three times before his time in the Army. Lynn said he was committed multiple times and was seen by a psychologist more than once.

Wanting her son to feel better and get well, they opted not to know what was said in his meetings, a tinge of regret now that she looks back on it.

"We wanted him to talk about his feelings and so we opted not to know," she explained, shaking her face. "I am so sad we did it that way because we never really knew what was wrong with him."

Lynn said she never tried to sway Matthew from joining the Army, even with his mental health issues so much in the forefront of his teenage years. She instead wanted him to chase what he wanted and to experience life on his terms.

"When Matthew first joined, I had to see him write his will and it just broke my heart," she said, her eyes closing slightly. "He told me he wanted his life insurance to go to his siblings for their college educations."

Lynn said she told him she didn't want him to do that, instead she wanted him to come home and stay alive.

"When he turned his back, I shook my head and thought 'he's going to die,'" she admitted. "I knew it then and there."

For as much sorrow as there is in Lynn's voice as she speaks at times, there's an overwhelming sense of pride for the young man she raised and who decided, along with five of his buddies from school on 9/11, they'd sign up and defend the freedom of this country.

"Four years after his death I found out about this pact he made with his friends," she said. "You can't be more proud when you look at that. A child could have so many reactions to it but his reaction was 'we're going to get those buggers. We'll go take 'em out.'"

As promised, Matthew joined the Army in 2008 and deployed to Afghanistan in October 2009. He spent a year in the war-torn country and saw things that could never be unseen.

He felt survivors guilt, Lynn said, and anxiety he couldn't shake loose of before returning home one-year later in 2010.

"He was different after Afghanistan," Lynn said, her voice trailing off as she looks to her right. "It's in his eyes. There's no smile. His eyes, they look dead."

Matthew coped, she said, with substance use in an attempt to bury the feeling of all he had seen during war and to drown the PTSD he couldn't escape.

"It was around three o'clock and my sister just looked at me and said what is wrong with you?" Lynn began to tell me, her eyes closed and the uneasy feeling of reliving the moments before her life would change forever, clearly written on her face.  "I said, I don't know. My stomach just hurts. I think something bad is happening right now."

It was Monday, May 13, 2013, the day after Mother's Day, Lynn was out on a getaway and Matthew, not even three years removed from Afghanistan, held a gun in his hand and silenced the demons that plagued him.

"It was about 3:16 p.m. when he pulled the trigger," she said. “My body almost knew this was happening.”

Just like that, her boy, her hero, her Matthew, took his own life. His war was finally over.

It’s been just over seven years since the Patton family’s lives changed instantly and forever but it was through their sorrow and grief they decided to begin The Matthew Patton Foundation after speaking to 400 active duty soldiers at Fort Hood, Texas.

In all their grief and anguish, it was a chance for them to save the lives of soldiers and veterans going through the same crisis Matthew was experiencing nearly 2,600 days ago.

“It’s very important that they don’t squish those emotions down,” Lynn said of those suffering with mental health issues. “Even if they don’t want to talk about it, get around the right people, like other veterans who have been there and understand. We have a whole list of people we can send any of them to.”

To date, the Matthew Patton Foundation has saved 35 lives from the clutches of suicide by providing them the resources they need to survive.

“I would allow things to be as they are,” Lynn said when I asked her if she would change anything at all about Matthew’s story. “He was very troubled, and you could see it on his face. He was miserable but now he’s at peace but oh yes do I miss him. I’ll miss that little kid forever.”

Lynn said he was the life of their family.Tthe funny person they always needed.

“I kind of thank Matthew sometimes,” she said. “I really wish he was here, but I let him know that he’s given me a gift to carry on and to save his brothers' and sisters' lives.”

She said she still hears to this day from the people with whom Matthew served and listens to their stories while taking solace in knowing he touched lives and made them better while he was here.

“The main point in all of this,” Lynn said with a matter-of-fact tone, “the main point here is that he’s not in pain anymore. If he were in pain still, I wouldn’t feel this way but he’s at rest now.”

The Pattons will continue to work hard every day, through their foundation, to save as many lives as possible, all through the memory of their Matthew.

“He knows that I’m carrying on his life’s dreams,” she said, allowing a sigh to escape her lips. “It’s a hard trade, trust me. It’s a hard trade.”
---
If you or someone you know is struggling and needs help, Lynn wants you to reach out to her at The Matthew Patton Foundation either via e-mail, or you can call her directly at (401) 524-6233.