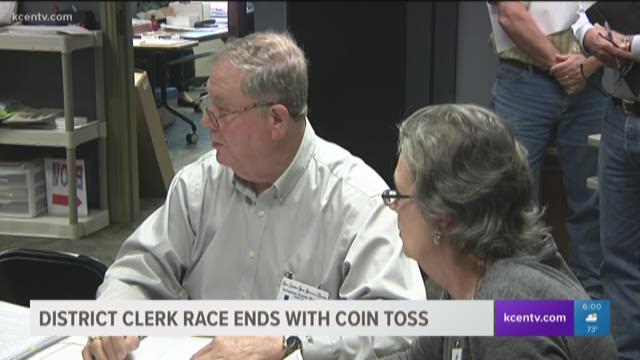 A bizarre Republican primary election for district clerk in Lampasas County became even stranger on Thursday.

Candidate Edith Wagner Harrison placed first with 1,106 votes -- not enough to clinch the 50-percent needed to avoid a runoff on May 22.

The unofficial results showed the second place finisher, candidate Trina Hudson, narrowly squeaking by incumbent Cody Reed by a mere two votes. But, after a handful of remaining ballots were counted, Reed and Hudson tied with 1,007 votes apiece, officials confirmed on Thursday.

The tie meant officials did an automatic recount at the Lampasas County Elections Administrator's Office late Thursday afternoon. But, the recount only confirmed the tie. After that, election rules dictated a coin would be flipped to determine if Hudson or Reed should be the one to challenge Harrison in the runoff election.

A coin was flipped, and Hudson won.

Reed and Hudson have been at odds since a confusing scandal involving a missing refrigerator that led to Reed's arrest and a misdemeanor charge of theft by a public servant (less than $100). At the time, Reed's defense attorney, James Stapler, claimed DPS only arrested Reed to make him look bad and help Hudson. Troopers have denied that characterization. Hudson previously declined to comment on the investigation of Reed.

"My 20 years of work in the criminal justice system has left me with the utmost respect for a defendant’s presumption of innocence," Hudson said in February. "I am running on the platform that I will do a better job organizing and running the District Clerk’s office, and I want that to be the focus of my campaign."

The fridge scandal became such a topic of conversation in Central Texas that a Facebook page was even launched in its name.

In another odd twist, election officials said the tie only happened because a handful of previously undiscovered ballots were found while the office was doing an audit this week. Why those ballots were not originally counted was not immediately clear.

Watch the coin toss below.