Companies speak out about Texas voter restriction bill. How will SB 7 affect you?

New state legislation could make voting by mail more complicated. Now some companies are speaking out. 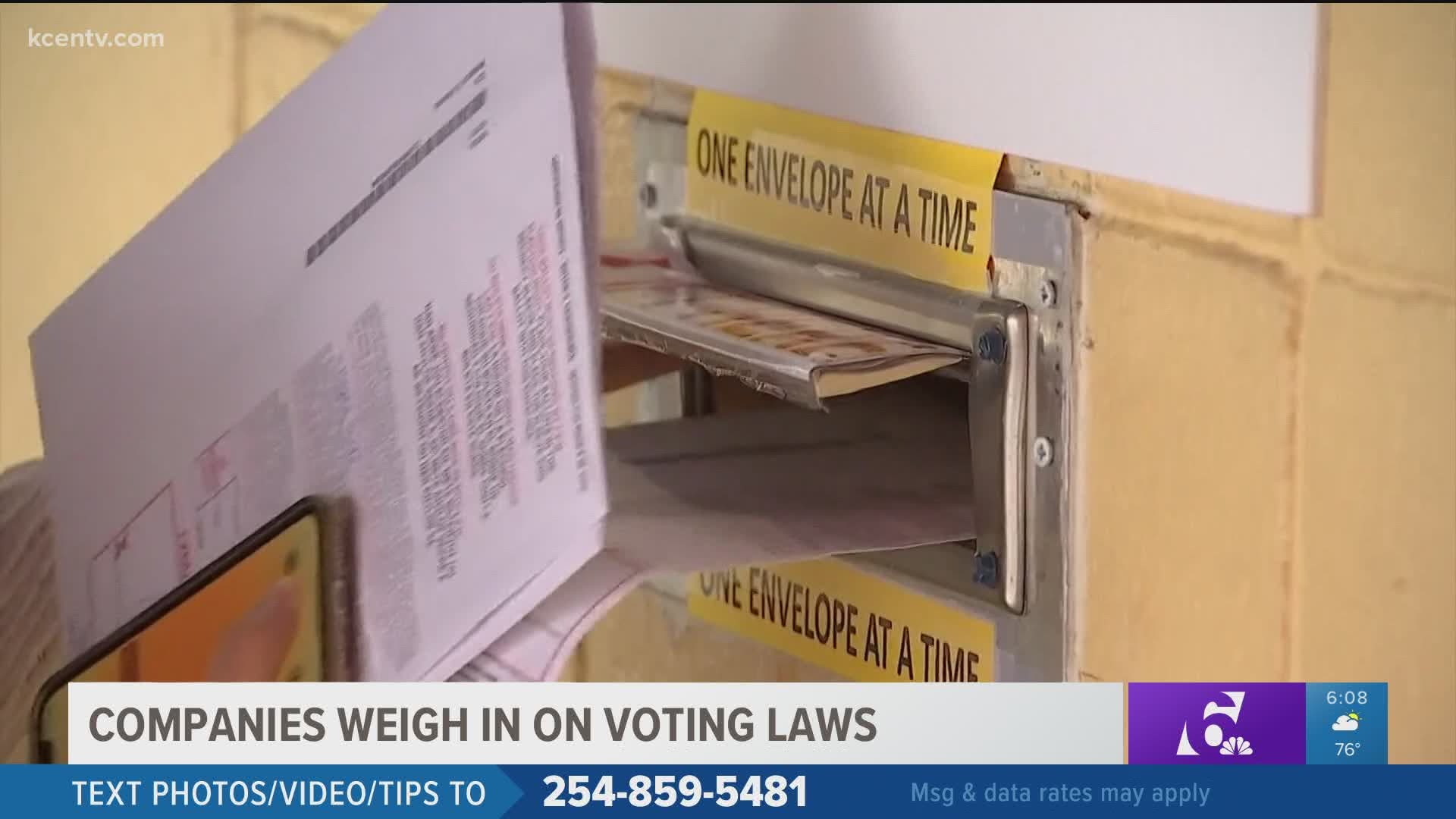 BELL COUNTY, Texas — More than 21,000 people across Bell and McLennan Counties cast absentee ballots in the Nov. 3, 2020 election. Now new legislation, backed by Texas senators who represent that area, would make voting absentee even more complex with SB 7. It's not the only change, either.

Texans must send in an application for a mail-in ballot before receiving their actual ballot, which is then filled out. The information on the application must match the ballot itself. Currently, political parties and even election offices can send out the applications to eligible voters ahead of time. SB 7 would require voters to request the application and forbid that assistance.

According to Sec.84.0011, "The early voting clerk may make no attempt to solicit a person to complete an application for an early voting ballot by mail, whether directly or through a third party."

The legislation also requires an explicit statement of why the voter is entitled to the ballot, and makes lying on the application a state jail felony.

It states in the following section, "An application for a ballot to be voted by mail on the ground of disability must require the applicant to affirmatively indicate that the applicant agrees with the statement "I have a sickness or physical condition that prevents me from appearing at the polling place on election day without a likelihood of needing personal assistance or injuring my health."

The bill then re-emphasizes that the state may not give out the form unless it is requested.

At the same time, this very ballot application can be downloaded and printed from this state website. It's unclear if the form will continue to remain online.

Texas A&M Central Texas Professor Jeffery Dixon tells 6 News the legislation is unusually restrictive when compared to some other states.

"It's an extremely severe set of voting restrictions when compared to other states. In North Dakota, for example, you can register to vote4 and vote on the same day," Dixon said.

Most of the provisions of the bill kick in November 2021.

Several companies are now reacting to the legislation. Michael Dell tweeted about the issue April 1 as did American Airlines. Dixon told 6 News companies may be taking a stand due to conviction, but it is also likely they will do so to distance themselves from the state while still doing business.

"If their state passes restrictions, they may be targeted for boycotts. companies in Texas may be trying to head that off before it happens," Dixon said.

Texas State Senators Dawn Buckingham and Brian Birdwell did not respond for comment on Monday. See a full list of senators who support the bill here.