A missing fridge is causing more headaches, court paperwork and use of government resources than anyone could have imagined. 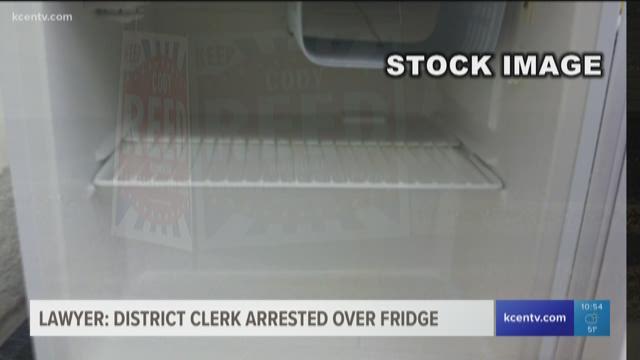 A newly-obtained arrest affidavit indicates the entire Friday arrest of Lampasas County District Clerk Cody Reed stemmed from a dispute over a small refrigerator that may not have even been working properly.

Reed's arrest was the result of an investigation by the Texas Rangers. Reed was taken into custody around 6:30 p.m. and arraigned by Lampasas County Justice of the Peace Andrew Garcia. He was later released on a personal recognizance bond, the county said.

The affidavit that led to Reed's arrest warrant was written by Texas Ranger Jason Bobo, who claimed there was sufficient evidence Reed had committed the crime of theft by a public servant (less than $100), which would constitute a Class B Misdemeanor.

According the affidavit, Bobo first started investigating the case after someone contacted him on August 24, 2017 and informed him that Reed had stolen a refrigerator from the Lampasas County Courthouse Annex building. The affidavit said the fridge was owned by Kristen Evans, who had previously loaned it to Kristi Morua -- a clerk in the District Clerk's Office. Morua moved the fridge into the hallway and attached a piece of paper with Evans' name on it, so Evans could take it back, Morua told Bobo in the affidavit.

But, according to Bobo's account in the affidavit, surveillance footage from August, 19, 2017 shows Reed back his pickup truck up to the rear doors of the Annex building, where he wheeled out a fridge on a dolly, loaded it into the bed of his truck and drove away.

Reed met Bobo for an interview, where Reed later explained the refrigerator had quit working. Reed told Bobo he -- not Morua -- had put the piece of paper with Kirsten's name on the fridge, according to the affidavit. According to Reed's account in the affidavit, he let the fridge sit in the hallway for a couple months before he decided it was time to throw the unclaimed fridge -- which he said was broken -- in a dumpster. Reed told Bobo he drove the fridge eight miles north to the Tyra Ranch, where he placed it in dumpster.

But, according to the affidavit, a General Warranty Deed from the sale and transfer of the Tyra Ranch indicates the ranch was sold prior to Reed claiming he put the fridge in the dumpster on the ranch. And, the new ranch owner and ranch manager told Bobo that Reed had already moved out, and the dumpsters were not yet on site on the date Reed claimed he disposed of the fridge there.

According to the affidavit, Reed said he was prompted to dispose of the fridge after the Fire Marshal instructed the hallway to be kept clean. The instruction, however, was given four weeks and two days earlier, as Bobo points out in the affidavit.

Reed told Bobo the fridge was dirty, smelly and leaky -- though those pieces of information were disputed by other county employees, according to the affidavit. Morua told Bobo the refrigerator was not "trash worthy," but that it would freeze up. Evans told Bobo she was never informed by anyone that the fridge was not working properly.

In hindsight, Reed allegedly said "should have left the f---ing thing where it was at," the affidavit stated.

In the affidavit, Bobo said he obtained records from the Lampasas County Sheriff's Office that indicated Reed falsified time sheets on at least three separate occasions in 2009, 2010 and 2012.

But, the attorney for Reed argued Friday's arrest was politically-motivated. Defense lawyer James Stapler claimed Bobo only launched the investigation because an arrest would look bad for Reed in the upcoming election for district clerk, and Bobo wanted to help Reed's opponent Trina Hudson.

Reed claimed no money was stolen, and the refrigerator was worth less than $100. He said the charge was only bumped from a Class C Misdemeanor to a Class B because of Reed's status as a public servant.

Stapler said Reed would hold a press conference at 4 p.m. Monday at the Lampasas County Courthouse. Stapler said he did not believe a grand jury would ever take the case to trial, but he would fight the charge if it went that far.

Lampasas County deferred all questions regarding the arrest to the Texas Department of Public Safety.

DPS Spokesperson Dave Roberts said he could only confirm that Reed had been arrested by the Lampasas County Sheriff's Office and subsequently charged. Roberts said an active investigation was still underway. Below is the full statement DPS issued Monday.

The Texas Attorney General's Office requested that the Texas Rangers investigate allegations against the Lampasas District Clerk in September of 2017. Following protocols for special investigations of elected officials, the request was reviewed on the regional level before being approved by the senior staff of the Texas Rangers.A three-page arrest warrant affidavit was filed with the Justice of the Peace, Precinct #1, for Lampasas County. Subsequently, an arrest warrant was issued for Cody Lee Reed for the offense of theft by a public servant (less than $100), a Class B misdemeanor. (These documents are available from the JP's Office by public information request.) On Friday, Feb. 2, 2018, Reed was arrested on the outstanding warrant by the Lampasas County Sheriff's Office.