'He was murdered while doing his job, protecting the citizens of Texas' | Trooper Damon Allen's wife testifies to state lawmakers

Kasey Allen's husband was killed by a man that had already attacked law enforcement twice but got out on bond. A new bill could have kept him locked up. 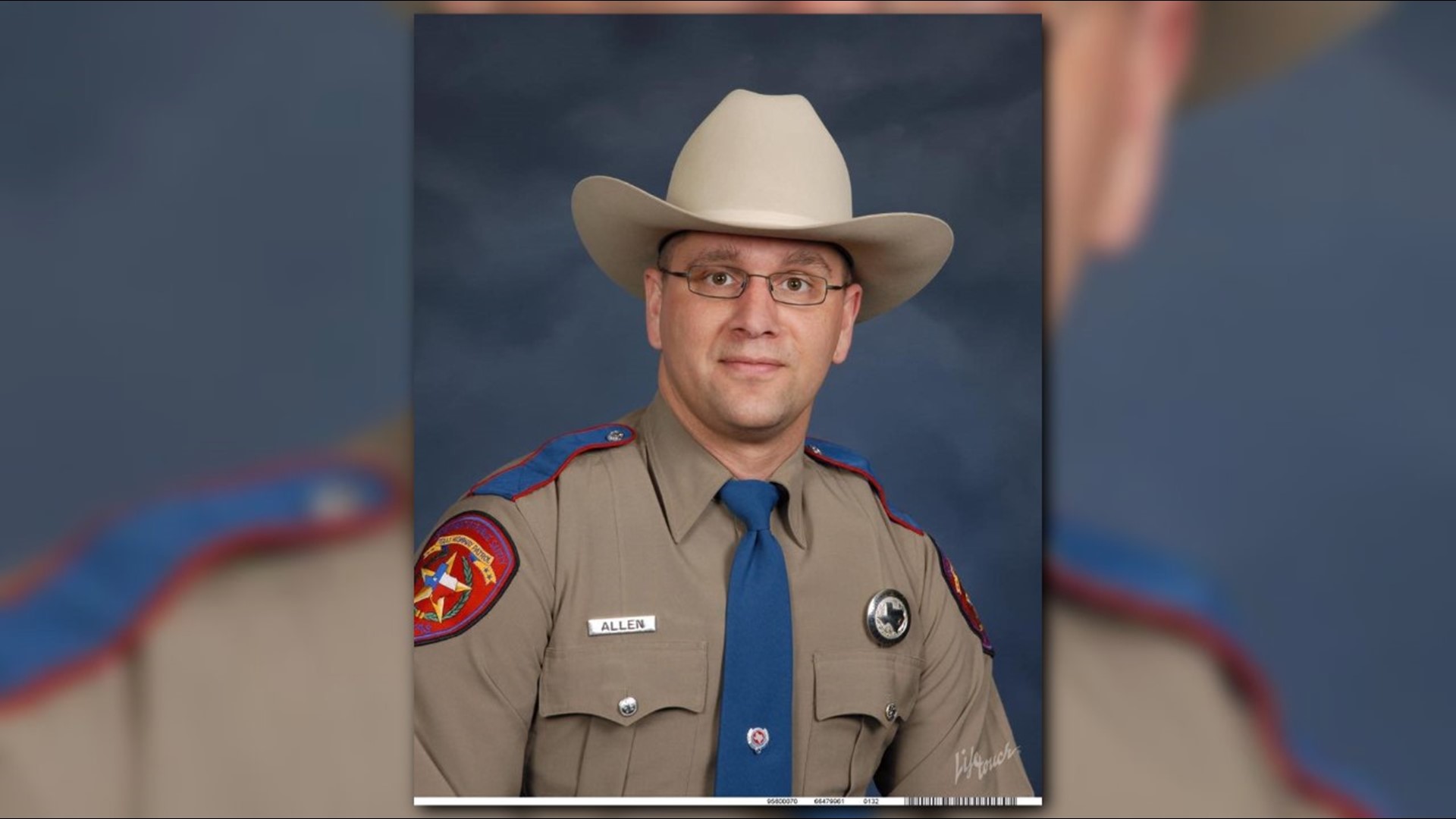 AUSTIN, Texas — Kasey Allen patiently waited 10 hours to testify before a state legislature committee Wednesday. She finally stepped up to the podium at 11:15 p.m.

Her husband, Trooper Damon Allen, was shot and killed in 2017 by DaBrett Black, the same man who had rammed his vehicle into a deputy during a high speed chase just five months prior. Black was also convicted of attacking a law enforcement officer just two years before that. Black still managed to get out on bond.

Allen said she never wants to see that happen to anyone else. Still, her opening marks were polite.

“My husband was murdered doing his job, protecting the citizens of Texas on November 23, 2017,” Allen said. “The day of his death we had thanksgiving lunch together as a family. As a trooper you don’t get holidays off. Because criminals don’t take holidays off. I kissed Damon goodbye that day. He said, ‘I’ll see you tonight.’ He passed by the kids rooms to give them hugs. He then left for work. He never came home.”

In a previous joint interview with Allen and Governor Greg Abbott, Abbott said, “The man who turned out to be Damon's killer was released back out onto the streets by a justice of the peace who said, and I quote, ‘I wasn't aware of a previous conviction.’”

H.B. 20 Would allow a judge to deny bail to a person accused of a violent of sexual offense if the judge determines that setting bail would not be enough to ensure the safety of the community or the appearance of the person in court. Allen believes that the justice of the peace who decided bail for Black in 2017 could have used this new tool to hold Black while assessing the risk to the community.

“I’m working as hard as I can, and have been, to prevent this tragedy from happening to another family because people are let out constantly over and over again on bail without regard for other human life,” Allen said.

“He was my friend. Same thing. This has to change. Now I’m working to get this passed for both myself and the other troopers family because I know them,” Allen said.

Republican lawmakers are also working to get a constitutional amendment, HJR 4, that  would allow the denial of bail to an accused person to ensure the person's appearance in court and the safety of the community. DPS Officers Association President Richard Jankovsky also spoke out for that amendment Wednesday night.

“We believe HJR 4 will help ensure that dangerous criminals like the one that murdered Trooper Damon Allen are not given bail and allowed back on to our streets,” Jankovsky said.

Not all witnesses were in support of the measure however. Defense Attorney John A. Convery and Michael Gross had strong words against the amendment.

“This joint resolution crushes the presumption of innocence. It puts such a big crack in it, that it will never be put back together. It’s amazing to me that something that has existed since the 1800’s is so easily discarded,” Convery said.

Gross said he had concerns about housing defendants if additional detentions happened as more people were denied bail.

HJR 4 is tied to H.B. 20, which is labeled as The Damon Allen Act. It is not the only such act, however. H.R. 2077 was also entered as the Damon Allen Act and included additional provisions. That act would allow for a judge to deny bail to an individual if they are charged with a felony offense, “Involving the use or exhibition of a deadly weapon,” according to the act.

The judge would need to determine with clear evidence that the individual could not be let out on bail in order to ensure, “The person’s appearance in court as required” or “The safety of the community or of any person, including the victim of the alleged offense,” according to the act.

At the same time, H.B. 2077 would allow the judge to do a pretrial risk assessment of the defendant. If a defendant was denied bail, there would be a bail hearing soon afterward where the decision would be evaluated.

Governor Greg Abbott has spoken in support of the H.B. 20 bill.