There are three defendants in the case now: The guard John L. Robertson accused of assaulting him, and the jailers who allegedly stood by and watched it happen.

MILAM COUNTY, Texas — A judge dismissed part of a former Milam County Jail inmate's lawsuit against the county and multiple defendants on Feb. 25, according to the Milam County District Attorney's Office.

John L. Robertson was an inmate at the jail in July 2016, and in his lawsuit filed in April 2018, he accused a guard of assaulting him, threatening him with a taser and ignoring his requests for medical treatment.

Additionally, one of the jail's nurses is accused of saying Robertson was faking his injuries, the lawsuit said.

The lawsuit also said Robertson was on probation in 2016 for an assault charge when he informed his probation officer he wanted treatment for drug addiction. He told KCEN Channel 6 in 2016 he was in the jail voluntarily while awaiting transfer to a drug rehabilitation program.

Robertson said he went to the hospital after his time at the jail.

The defendants in the case filed a motion to dismiss the lawsuit in July, 2018, saying Robertson failed to state his claim under the Federal Rules of Civil Procedure, court documents said.

However, Jonathan Mendoza, Cindy McBee and Joshua Hughes were denied in the motion and are still defendants, according to the judge's ruling.

Robertson accused Mendoza of throwing his full body weight against him, leaving him temporarily paralyzed and permanently disabled, while McBee and Hughes stood by and watched, the lawsuit said.

Robertson claimed Greene, White, Torrey and Douglas failed to properly train jailers, were aware of "a history of civil rights violations" in the jail and were "indifferent to unconstitutional abuse and mistreatment," court documents said.

Judge Albright dismissed those claims because the jailers met Texas' minimum requirements for training, and Robertson didn't show that they were aware of mistreatment, court documents said.

"What [Robertson] has alleged is merely conclusory; he has not alleged facts upon which the Court could predicate a finding of deliberate indifference by Defendants Greene, White, and Douglas," the document said.

Torrey was dismissed as a defendant because Robertson's accusation that he kept him in the county jail to delay his arraignment for a failure to pay child support charge didn't fall under the court's jurisdiction.

Milam County was dismissed as a defendant because to be held liable, Robertson must've shown that "excessive force or deliberate indifference" is a policy or custom of the county, court documents said.

According to the document, the Fifth Circuit Court defines official policy as:

Blankenmeyer was dismissed as a defendant because "threats alone" are not enough for a claim of a rights violation, documents said.

Robertson accused Blankenmeyer of threatening him at a physical therapy session, and he said he stopped attending PT appointments while incarcerated as a result.

Vargas and Yoffe were dismissed as defendants, since "deliberate indifference" for ignoring medical needs "is an extremely high standard to meet," documents said.

Robertson accused them of misdiagnosing his injuries as "mere fakery," failing to call him an ambulance, treat his blood pressure and send him to PT for a back injury.

According to the document, an incorrect diagnosis doesn't meet the standard for deliberate indifference, and not treating the blood pressure or recommending PT were "a classic example of a matter for medical judgment," documents said.

The defendants who were dismissed have qualified immunity from the lawsuit, but not for defense to liability, the document said.

Channel 6 reached out to the attorneys for Robertson and the county but did not get a response. 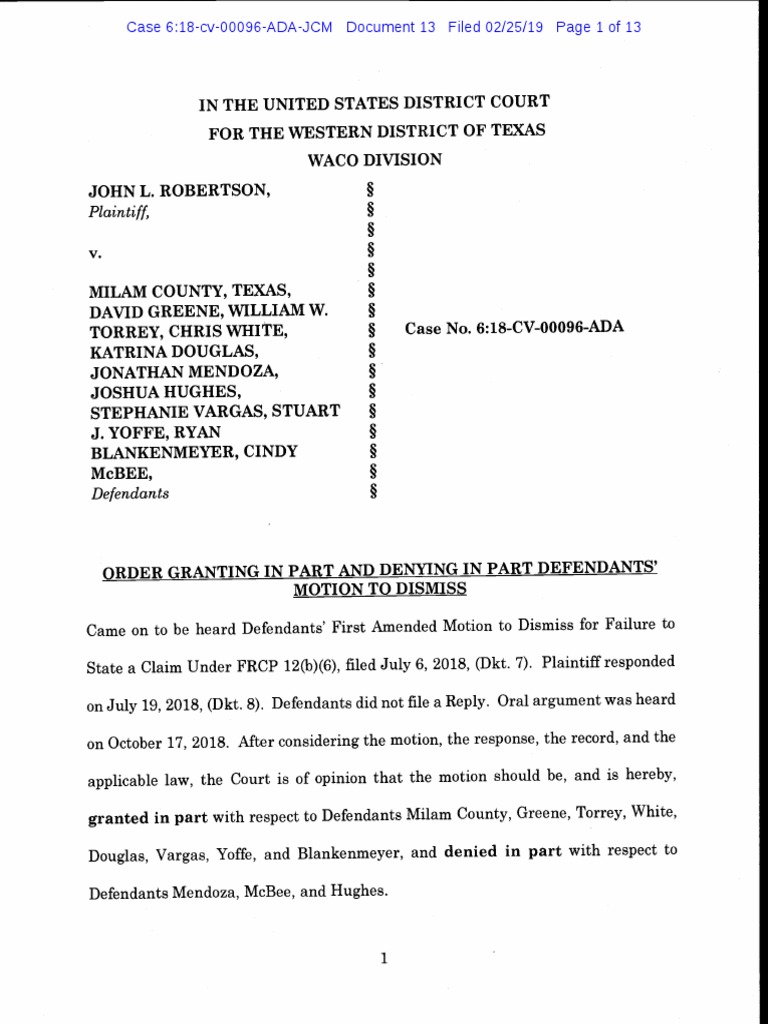 Order Granting in Part and Denying in Part Defendants' Motion to Dismiss | Federal Rules Of Civil Procedure | Qualified Immunity
1 To be clear, Texas prisoners' medical malpractice claims are indeed actionable, but such actions arise only under state tort law. Estelle, 429 U.S. at Thus, 107; Baker v. McCollan, 443 U.S. 137, 146 (1979). if they are to be pursued absent supplemental federal jurisdiction, such actions should be pursued in the state courts under the Texas Tort Claims Act.

Other Popular Stories on KCENTV.COM