Associa Hill Country of Round Rock's legal counsel said there was never an active investigation opened, so no fine was ever on the horizon for Sgt. Chris Link.

KILLEEN, Texas — The active duty U.S. Army soldier who was repeatedly threatened with fines for flying his American flag at his residence will not be fined by the Associa Hill Country Homeowners Association of Round Rock.

In fact, their legal counsel said there was never an active investigation opened, according to their records, and no fine was ever on the horizon for Sgt. Chris Link.

"This is great news," Link said in a phone conversation after he heard the news Monday. "This shouldn't have been an issue to begin with. I mean, it's great news that they're dropping it, and as far as my property management, as long as nothing happens there, I think everything is settled."

Link said he did get a lawyer. In a written statement to KCEN Channel 6, attorney Josh Pearson said "Sgt. Link has not violated any valid or enforceable provisions of the HOA bylaws." 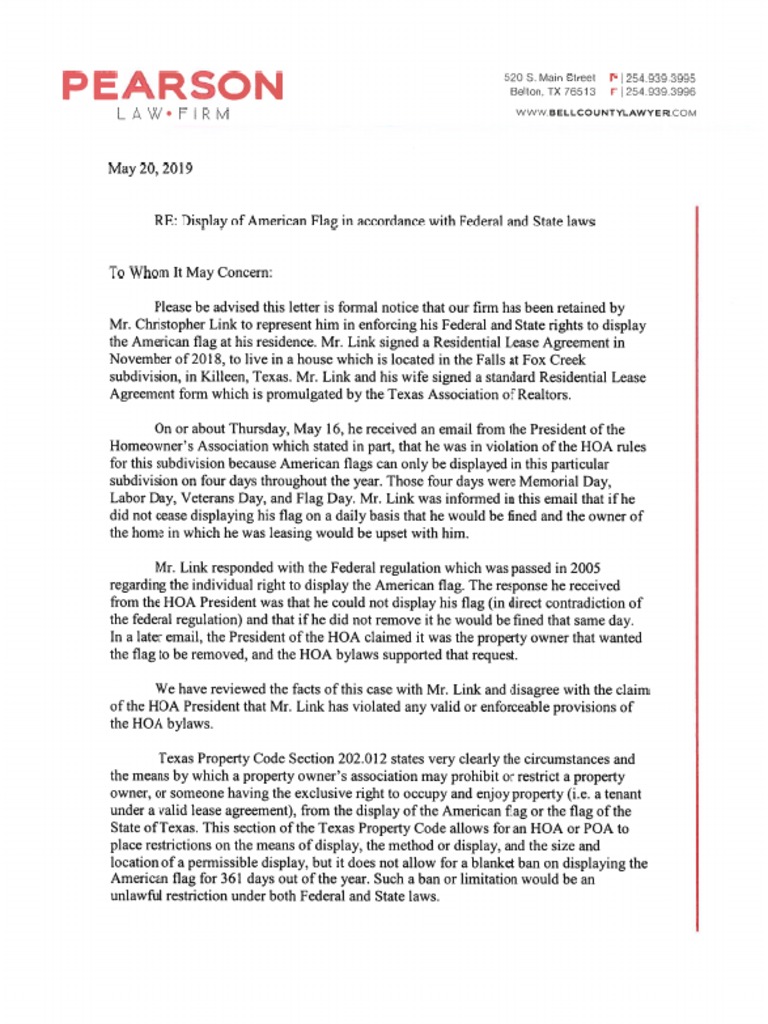 Fort Hood soldier's response to HOA flag complaint
This is Sgt. Chris Link's attorney's statement on the HOA-flag flying dispute in his neighborhood. Link was told he could only fly the flag on certain holidays, but he responded that the American Flag Act of 2005 lets him fly the flag.

Robert Woods, the HOA President of the neighborhood, sent a series of e-mails to Link stating his fine would be sent out immediately if he didn't comply and remove his American flag from view. Woods said Link flew his flag outside of the four designated times of the year it could be flown in the neighborhood.

However, that would be a violation of the American Flag Act of 2005.

"It is a federally protected right that we can fly the American flag in America no matter where you are," Link said. "People have been obviously bullied into taking their flags down. Just stand up and fight for your right."

Link said he will retain his attorney in case the issue doesn't go away completely. He also said he doesn't hold any animosity and doesn't think Blessed Properties, the rental company he goes through, is unpatriotic in any way, which is something he said people have claimed during this ordeal.

'Everything we have worked for is gone.' Family arrives on Fort Hood with nothing but donations after U-Haul is stolen in Tulsa