A Troy mother said her son has been given in-school suspension and does his work in a cubicle because of his braided hairstyle. 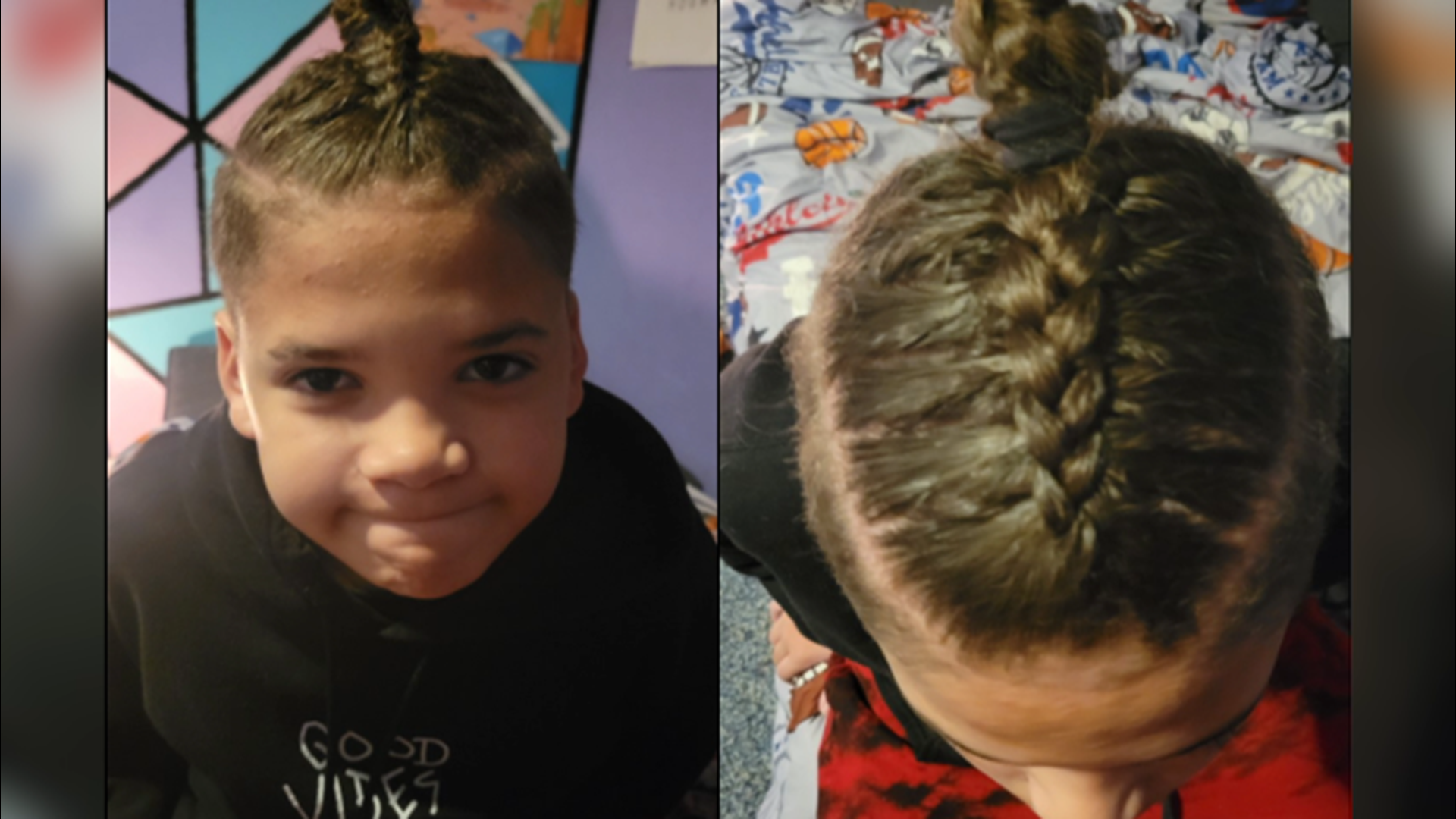 TROY, Texas — Hope Cozart has retained an attorney against the Troy Independent School District after she said the district put her 11-year-old in in-school suspension due to his haircut.

Maddox Cozart has a black father and a white mother. His mother, Hope Cozart, told 6 News that Maddox and his sisters wanted to learn more about their African heritage and wanted a braided hairstyle.

"We try to teach our kids about all of their culture. Black, white, Native-American, everything," Cozart said. "They like to explore their culture. We looked at African Tribes and how they braid their hair up. Bantu knots and all the meanings of all that."

Troy ISD decided that the haircut violated the student handbook. It states, "4. In grades 2-12, hair: d. May not be worn in a ponytail, top knot, bun, or similar styles."

According to a letter sent to the school district by the McCoy Law Firm, "Maddox was then given in-school suspension (“ISS”) on April 5, 2021, based on his hairstyle. Maddox has since been given ISS every subsequent school day as a result of his hairstyle. This action has denied Maddox an education equal to that of the other students at Raymond Mays Middle School. As Maddox has been placed in a cubicle away from his classmates while on ISS, Maddox has also been denied any real opportunity for socialization, which is critical to any students’ development and education, especially considering the isolation all children have experienced this past year due to the pandemic."

Cozart told 6 News the policy is outdated and needs to be changed.

"Middle school is the hardest years for a lot of kids. For you to single them out because of their hair. That, that's crazy. Kids should be able to express themselves and hair does not affect your education," Cozart said.

6 News reached out to Troy ISD on Thursday to ask about the student's situation.

Before 5 p.m., Superintendent Neil Jeter told 6 News via email, "It would not be appropriate for me to discuss disciplinary action involving specific students."

Later in the day, Jeter clarified that he is not allowed to provide some information due to student confidentiality restrictions.

6 News also asked Jeter about a previous letter Cozart's daughter wrote to a counselor about being bullied.

Jeter replied, "I have had no direct communication with Mr. or Mrs. Cozart. My phone messages and email have not been returned."

Attorney Waukeen McCoy told 6 News Thursday that he was giving the school district until 12 p.m. on Thursday to return Maddox to class or they would file a complaint with the Texas Education Agency. He said they may take additional actions afterward.

"I think that their dress code policies are outdated," McCoy said. "There's a lot of Texas independent school districts that have outdated policies which prevent male students from having ponytails, pigtails, buns. It has no legitimate basis at all. It has nothing to do with educating the students. Clearly, to me, it's discriminatory to his race and his culture."

The letter from the McCoy Law Firm also calls on the school district to remove portions of its dress code. Troy ISD will have a school board meeting on Monday, but Superintendent Jeter told 6 News the dress code is not currently on the agenda.

"The dress code is not on the April 19 board agenda. The board could take action before the next school year, but there has been no discussion to do so at this time," Jeter said.