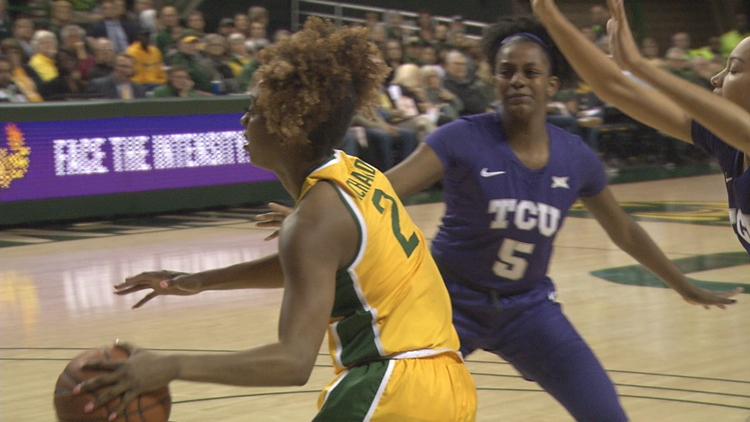 Photo by: Kurtis Quillin/KCEN
Didi Richards (2) drives along the baseline in the first quarter of a Big 12 women's basketball game between Baylor and TCU at the Ferrell Center in Waco on Feb. 12, 2020. No. 2 Baylor won, 81-62, expanding its conference lead to three games.

Richards, a junior from Cypress, is the reigning Big 12 Defensive Player of the Year with two-straight seasons to her credit on the Big 12 All-Defensive Team. She was joined on the list of finalists by Aliyah Boston of South Carolina, Aari McDonald of Arizona and Kylee Shook of Louisville.

All four players were named Defensive Player of the Year for their respective conferences. Richards has a reputation for being one of the nation’s top on-ball defenders, and she leads the charge for Baylor, which ranked No. 1 in the country in field goal percentage defense for four consecutive seasons.

The finalists were chosen by the Atlanta Tipoff Club’s board of selectors, comprised of leading journalists from around the country, who based their selections on outstanding on-court defensive performances during the 2019-20 regular college basketball season. The winners are scheduled to be announced on April 1 and each winner will be honored with a ceremony at a later date.

About the Naismith Women’s Defensive Player of the Year finalists: