Big 12 blowup will have a massive impact outside college game

From high school recruiting to Saturday gamedays in Waco, the Big 12 blowup will impact much more than football. 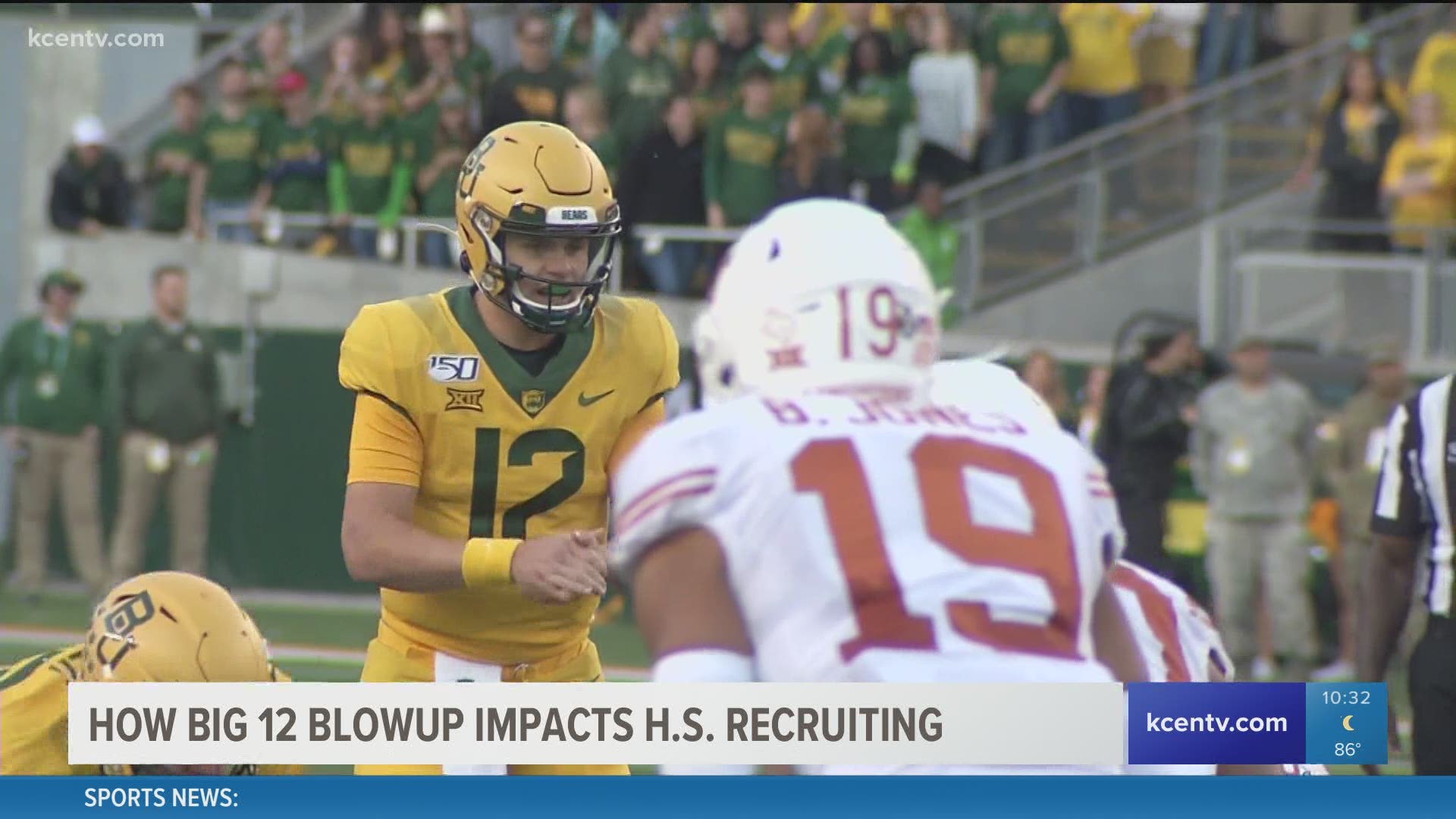 WACO, Texas — The University of Texas and University of Oklahoma announced on Monday that they will not extend their Grant of Rights with the Big 12 Conference past 2025. With this announcement, the two schools are positioning themselves for a move to the Southeastern Conference.

With the two powerhouses potentially leaving, it will have damaging effects on the Big 12 which will directly impact Baylor University and its partner schools. The impact will also be felt in Waco, in the broadcast booth and in high school recruiting.

Sammy Citrano owns George's Restaurant. The Waco staple is the spot to watch Baylor games on Saturdays, and he said not having two rivals will hurt.

“The week of Texas and the week of Oklahoma are the two busiest weeks of the year here at George’s," he said. "And probably for our community for athletics and sports as a whole, I mean it’s huge. We have a 30-year tradition of us serving their teams and their fans.”

He said that he has a relationship with the fans from different schools who make George's a part of their trip to Waco when they come to watch athletics. Not hosting a rivalry game party when the Bears play the Longhorns or the Sooners is sad for him.

"This is not going to shut George's down but it does definitely put a sadness on all of us. We had 25 years with the George's Party Zone, but we don't have that anymore and it was probably the writing on the wall for that as well."

Voice of the Bears John Morris said that while this is not great for Baylor, it is something they have experienced before.

“We’ve already sort of gone our separate ways," Morris said. "We did it once when the Southwest Conference ended and TCU went one direction and SMU went another, Baylor and Tech were fortunate to be together in the Big 12, and Texas. And now here’s another splintering going in a different direction again.”

With OU and UT on the schedule at home for Baylor this year, he knows the crowds will be rowdy.

"I think our Baylor fans will welcome them responsibly, but it’s gonna be tough because everyone will be out for blood against Texas and against Oklahoma this year,” Morris said.

Of course, this conference change could also hurt the Bears on the recruiting trail when it comes to getting in-state athletes to play at Baylor. Toby Foreman, the head football coach at Shoemaker High School, has coached over 70 students who have gone on to play Division I football. He has no doubt that the Longhorns will have an advantage in Texas over non-SEC schools.

With Baylor looking in from the outside, it will be a challenge.

"If they have an opportunity to play in whatever Power 5 conference they can play in, some of them have said they want to play in the SEC, and it doesn't matter who offers them outside of it."

But Morris is confident that the Bears will be okay, and is placing his trust in the school's top brass.

“I think we’ll be okay, whether it’s the Big 12 adding schools and staying a part of the Big 12 or if we go somewhere else and end up a part of another conference. I have no way of knowing which direction that’s going to go, but I really do have faith in our leadership.”

The earliest that the two schools can leave is 2025 unless they pay a $75-$80 million fine and provide at least 18 months notice. There other hope is that other schools in the conference will not extend their rights either and attempt to join other conferences like the Big 10, Pac 12, or ACC.