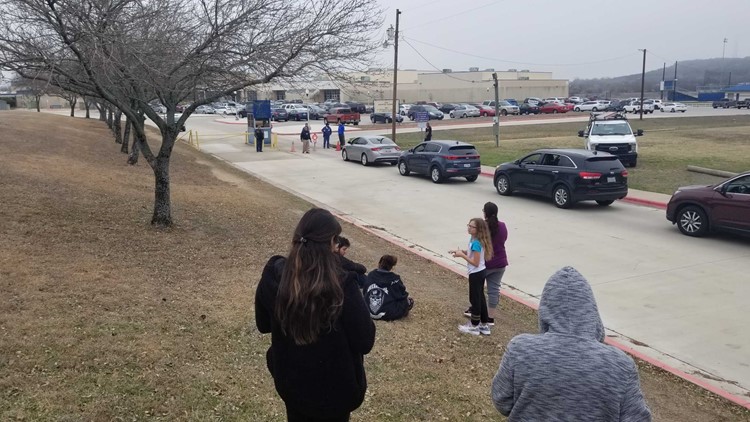 Photo by: Andrew Moore - 6 News
Dozens of parents wait outside Copperas Cove High School on Jan. 13, 2019 after the school was placed on lockdown for what the district called an "unsubstantiated threat."

COPPERAS COVE, Texas — The Copperas Cove police chief took to the station's Facebook page Tuesday to dispel rumors about what happened during a lockdown at Copperas Cove High School on Monday and to defend the way his department handled it.

Chief Eddie Wilson said he wanted to address the many rumors about what happened, including reports of students with guns and hostages.

"These, along with other comments, have risen to the level of ridiculousness, Wilson said. "There was no evidence of anyone firing a gun and to this point, we have produced no students or teachers identifying themselves as a witness to such events."

Wilson also laid out in detail the chain of events that set off the lockdown.

The call started at 11:40 a.m. after police got a call of a student with a gun, Wilson said.

"The school was placed on lockdown, not just because of the reported firearm, but the description of the student was vague, and his location was unknown," Wilson said.

Wilson said his officers worked with the Copperas Cove Independent School District staff and eventually found the student in question in a classroom.

"Further investigation revealed the suspect was never in possession of a firearm but instead had a six-inch survival knife, which is illegal to possess on campus," Wilson said.

Wilson went on to say the school was kept on lockdown to make sure they had the right student and that there was no firearm.

"Failing to keep the school locked down would have brought a mass number of parents to the campus and placed the entire population of students at risk," Wilson said.

6 News was at the school soon after the lockdown started. Several dozen parents were already at the school wanting to know what happened.

Wilson said his department is now reviewing how the situation was handled and that they had identified some factors they hoped to correct.

"Overall, I’m proud of how our dispatchers and officers responded and managed this incident," Wilson said. "I also appreciate the school's response and am proud of the partnership we have developed over the years."

CCISD posted about the lockdown to its Facebook page about an hour after it started. They posted the lockdown had ended a little before 1:30 p.m.

"Parents must understand that notification is not at the top of the list especially when we’re still unsure of the situation ourselves," Wilson said. "Calling the school and our dispatch center in the middle of a crisis is only taking valuable resources away from helping us get the answers you’re seeking."

CCISD sent a press release to the media at 3:15 p.m. giving details on the arrest of the student.

In his post, Wilson also addressed the idea that the department was attempted to cover up a shooting. He asked that any parent whose child might be a direct witness to a shooting be brought to detectives so they can follow up on the information.

"There is much more to lose than gain in covering up a shooting if one did occur," Wilson said. "If you believe this conspiracy, you’re giving us and the school district way too much credit."

Wilson also said that despite reports on social media that a SWAT team was at the school, that was not the case.

"Officers are equipped with certain tools and equipment that can give the appearance of SWAT, but they are not all part of the SWAT team," Wilson said.