Cedric Marks: An in-depth look at a long and violent criminal past

The disappearance and subsequent deaths of Jenna Scott and Michael Swearingin exposed a criminal background for Cedric Marks that stretched across the country.

TEMPLE, Texas — Cedric Marks, the man who led police on a 9-hour manhunt in Conroe, Texas, Sunday and was charged with capital murder in the deaths of Jenna Scott and Michael Swearingin, has a past that includes prison time for robbery, along with weapons charges, harassment and burglary.

Marks escaped from a Texas Prisoner Transportation Services van at 7:20 a.m. Sunday when the guards stopped at a McDonald's to get food, according to Conroe police.

Marks, 44, was thrust into Central Texas headlines in the days following the disappearance of his ex-girlfriend Scott and her friend Swearingin. The two were last seen Jan. 4. Their bodies were found in the small town of Clearview, Oklahoma, south of Tulsa, Jan. 15.

Marks, who was once a trainer at Title Boxing in Killeen, was in the process of being extradited from a Kent County, Michigan jail to Temple for allegedly breaking into Scott's home on Aug. 21 when he escaped from the private prison transport.

Once police caught him after the 9-hour manhunt, he was finally booked into Bell County jail at 11:07 p.m. Sunday.

He's charged with capital murder, interference with an emergency call, false reporting to a law enforcement agency employee, violation of a protective order, burglary of a habitation and committing a crime, according to the Bell County Jail Log.

But Marks' criminal past goes back decades to when he was a teenager.

RELATED: Cedric Marks' bond raised to $1.75 million in connection with Scott, Swearingin killings and other charges

Marks has a direct connection to Clearview, Oklahoma, where the bodies of Scott and Swearingin were found. His cousin, Shirley Nero, told Channel 6 Marks' father grew up in the small town of about 60 and and that his family hosts reunions there.

Channel 6 tracked down court records in Tulsa County that show Marks had felony charges for assault and battery with a dangerous weapon and attempted escape, for an incident from June 4, 1992.

Those charges were dismissed; however, records from the same court show Marks pleaded guilty to an attempted robbery with a firearm charge on Aug. 21, 1992, for an incident from February of that year.

The Tulsa County court dismissed an attempted robbery with a dangerous weapon charge at the request of the state the same day in court.

Marks served six years in an Oklahoma prison after his guilty plea and was released on Nov. 23, 1998, according to court documents.

Credit: KCEN
This is a mug shot from an Oklahoma penitentiary where Cedric Marks did time during the '90s.

Marks' time in the Oklahoma prison was not without incident. He had multiple misconduct charges including one in which he threatened prison staff. 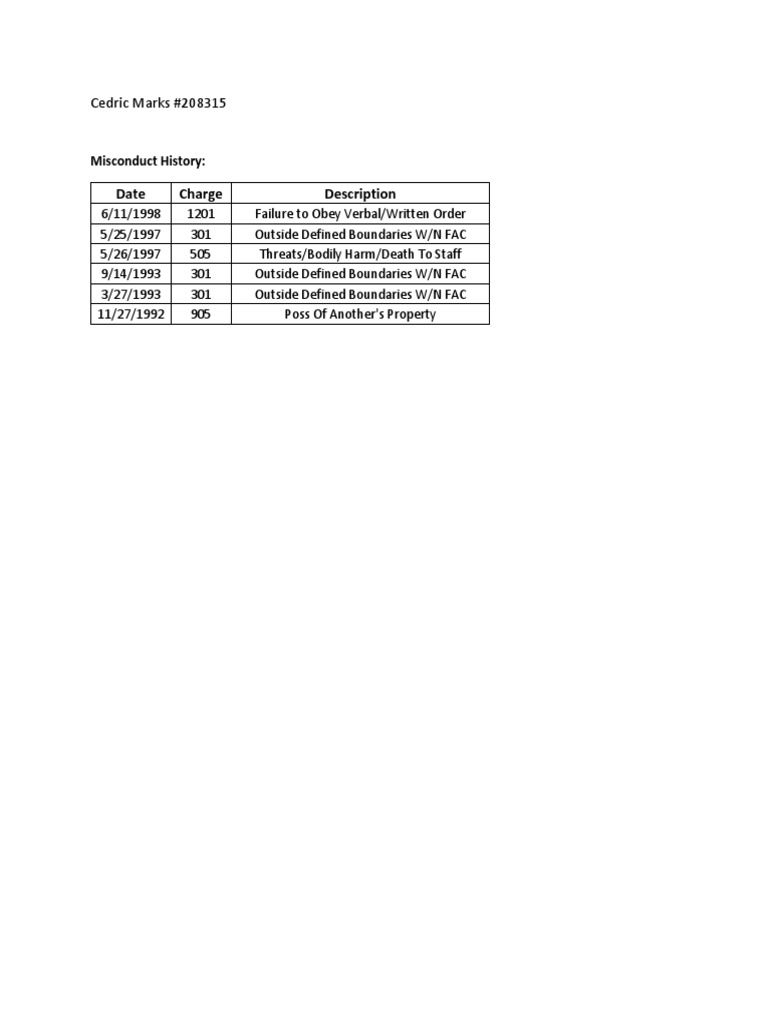 In March of 1999, five months after his release from prison, Marks was arrested in Coryell County on two misdemeanor counts of Unlawful Carrying of a Weapon. He was convicted in June.

He was also charged with issuing a bad check in Killeen in 2003, but that charge was ultimately dismissed.

The Washington state court amended his phone harassment charge, found him guilty of harassment and dismissed the criminal trespassing charge with prejudice on Nov. 21, 2008.

According to court documents, in 2009 Marks had a bitter custody battle over his son with a woman named April Pease, who is from Washington state.

The Washington court documents depicted Pease as a woman with severe drug addiction problems, which affected the parenting and safety of her children.

The documents described Marks as someone with aggressive behavior and who was in "complete denial that he has issues around domestic violence."

Pease was given temporary custody and was staying in a women's shelter in Minnesota. She went missing in March 2009, and her son went back into Marks' custody.

Bloomington, Minnesota police confirmed the investigation into Pease's disappearance never closed and that Marks was a person of interest.

Channel 6 spoke with April's mom, Dottie Pease. She said she believed her daughter might have had a drug relapse, however, with the new information out of Texas, she said it's possible Marks could have had something to do with April's disappearance.

Channel 6 first learned of Marks' connection to Scott and Swearingin when we reported on Jan. 6 that Scott had filed a protective order against Marks on July 27, 2018.

She said her former boyfriend told her about killing pets when he was a child in Oklahoma. She said Marks explained how he covered up the killings and "he could do the same in Texas," the affidavit said. Scott said Marks threatened to hurt her and her family.

It was less than a month later when Marks allegedly broke into Scott's home.

The arrest affidavit filed on Nov. 14, 2018, said Scott went to the Temple Police Department on Aug. 21 to file the police report.

Scott said she and Marks had open investigations for assault pending against each other in Killeen, according to the affidavit.

Scott told police Marks threatened her while her daughter, who was 9-years-old at the time, was in the house.

“You know what I’m capable of.  Your entire family and all of your friends will need witness protection if you call the police,” Marks told Scott, according to the affidavit. Marks also said to Scott that she needed to drop the charges against him. 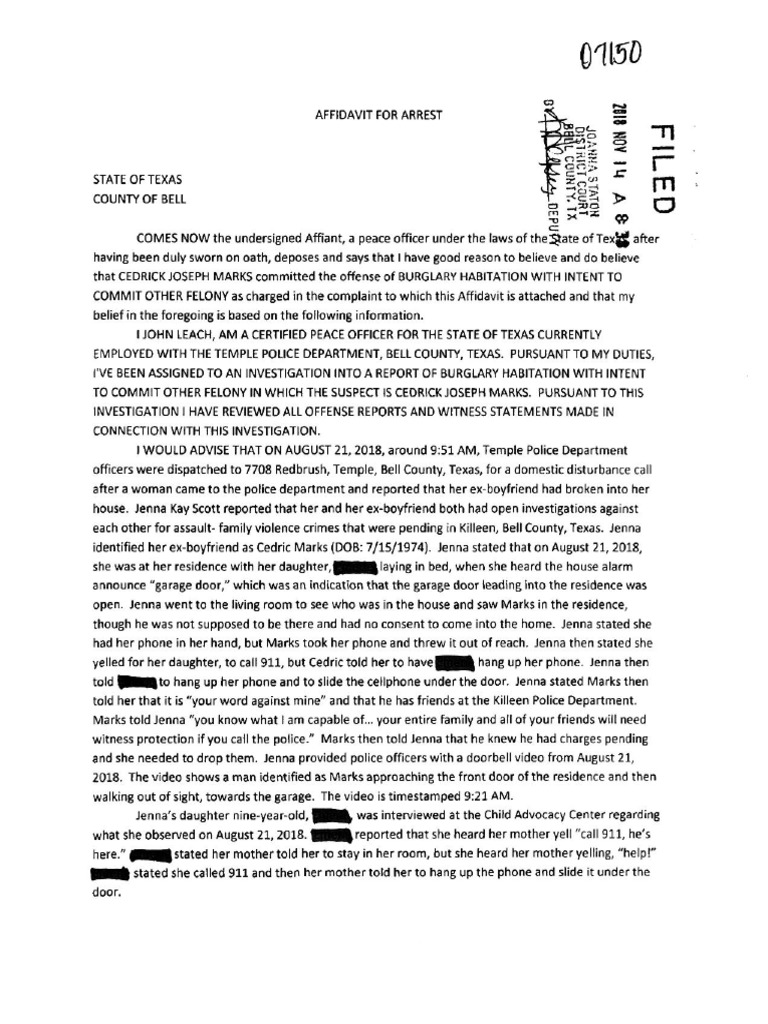 Redacted Arrest Affidavit for Cedric Marks
AFFIDAVIT FOR ARREST 'STATE OF TEXAS COUNTY OF BELL aaa 8 V NE AON GI 'COMES NOW the undersigned Affiant, a peace officer under the laws of the State of Tex after having been duly sworn on oath, deposes and says that Ihave good reason to believe and do believe that CEDRICK JOSEPH MARKS committed the offense of BURGLARY HABITATION WITH INTENT TO COMMIT OTHER FELONY as charged inthe complaint to which this Afidavitis attached and that my belief in the foregoing is based on the following information.

From Texas to Michigan

January 8, four days after Scott and Swearingin were last seen, Marks was picked up in Grand Rapids, Michigan for the August burglary charge at Scott's home.

The Bell County District Attorney's Office said on Jan. 10 it is in the process of extraditing Marks from Grand Rapids, where he remained in custody as of Jan. 18.

Two more women entered the scene when Marks' wife and mother of two of his children, Ginell McDonough, and another woman, Maya Maxwell, were arrested in Muskegon County, Michigan on Jan. 11.

McDonough was charged with harboring Marks and Maxwell at her home between Jan. 5 and Jan. 9. During her arraignment Jan. 16, a judge set McDonough's bond at $75,000 for harboring felons.

Maxwell proved to be the first direct connection to the disappearance of Scott and Swearingin.

According to a Temple arrest affidavit, Maxwell told detectives in a voluntary interview she took Swearingin's vehicle to Austin in an attempt to hide it from law enforcement. The vehicle was found Jan. 6 in an area of Austin that Swearingin's mother said her son would never go.

Maxwell also appeared before a Michigan judge Wednesday for an extradition hearing. She is charged with tampering with evidence and agreed to not fight extradition.

"Maya Rene Maxwell has been charged with the 3rd degree felony offense of Tampering with or fabricating physical evidence arising out of Bell County, Texas. She was arrested in Michigan, and is awaiting extradition to Bell County, Texas. The expected date of return is in the immediate future. Her bond is set at $150,000."

Marks and Maxwell have both been booked into Bell County Jail.