This outdoor adventure company is free for active-duty soldiers. 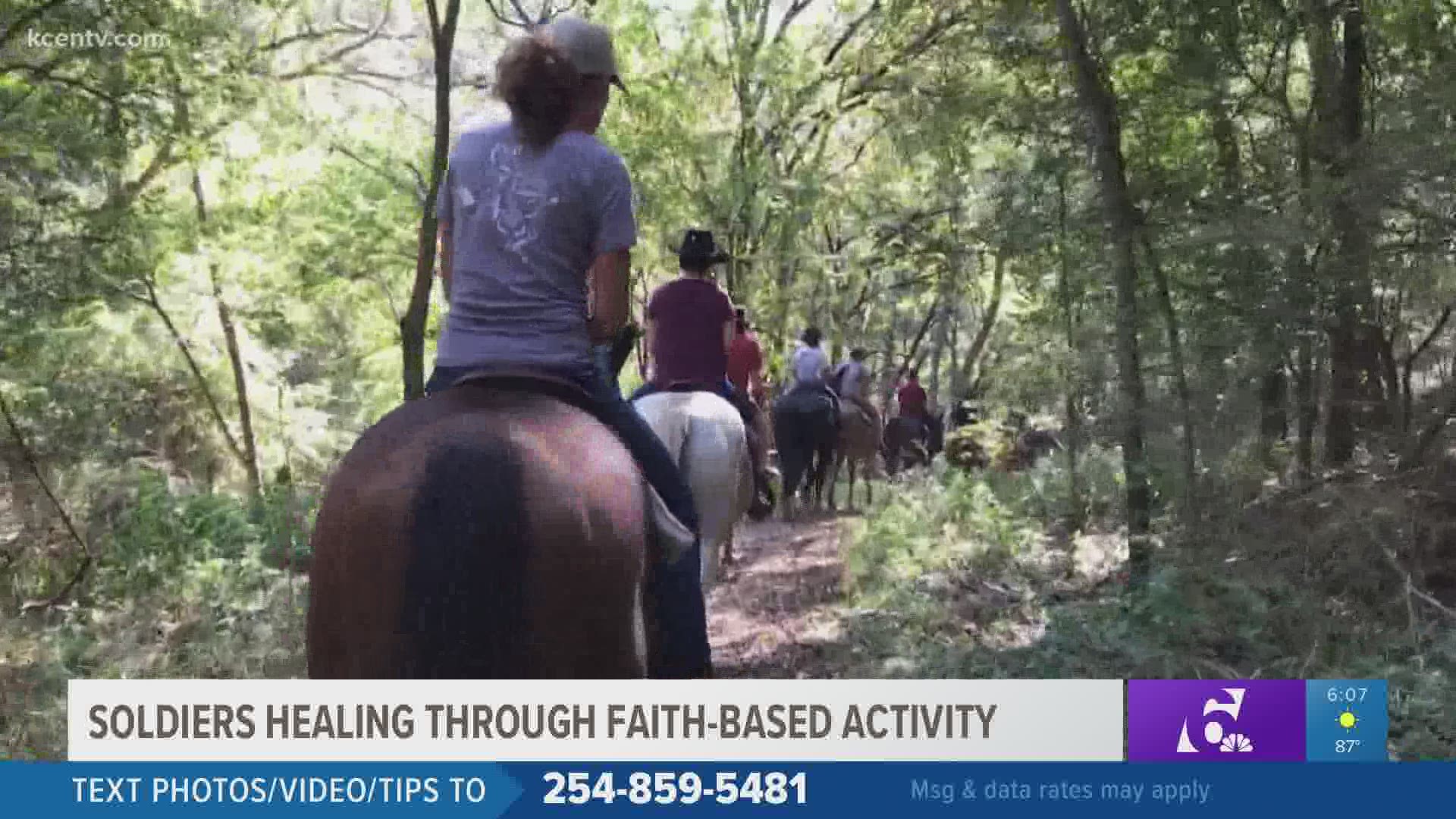 WACO, Texas — Under the early morning Texas sunrise at the Brazos Bluffs Ranch in Waco, Soul Survivor Outdoor, a non-profit outdoor adventure company awaits the arrival of some of Fort Hood's finest troopers for a day of horseback riding, learning, listening and self-reflection.

"We focus on Christ-centered adventures," said Rick Wolf, founder of the company and a 29-year Marine Veteran. "That means we're in the outdoors doing rock climbing, skydiving. We are doing horseback riding today with active-duty military members."

Wolf said while Wednesday's activities were adventurous, he said there will also be some deep faith discussions in a real-life outdoor setting. This one happened to be near the banks of the might Brazos river in McLennan County.

"It's about getting them outside of the PowerPoint presentation," said Chaplain Karen Moore with the 7-17. 1ACB at Fort Hood.

The United States Army Chaplain Corps recommended Soul Survivor Outdoor as a form of spiritual healing and engagement as SSO continues to extend its services to all military branches. Chaplain Moore, who wants to relieve the stress and tension that built up during a recent deployment to South Korea, looked for such an avenue for her soldiers.

"The most important thing we are doing in our partnership with SSO is that we're getting out of the environment that is causing a lot of the stress and anxiety," she said. "This allows us to relax and really dive deep into reflecting of themselves, reflecting of their spirituality, as well as getting closer and connected with nature."

Soul Survivor Outdoor strictly focuses on active-duty soldiers, not veterans, with a belief in early intervention. They work with soldiers headed on deployment and are there to help them heal and find peace when they come back. All of it, Wolf said, is accomplished through honest life and faith conversations, teachings and guest speakers.

"We know that life's challenges are going to be difficult on and off the battlefield and having a faith foundation is critical to having success in life and maybe not succumbing to some of the stress issues that folks typically do," Wolf said.

Lt. Col. Jason James with the 1st Cavalry Brigade at Fort Hood said there is often something plaguing young soldiers. It could be a multitude of things, like family dynamics or marital problems, but he's seen it constantly and throughout his time in the military. He said he isn't immune to it either.

"It can be very daunting," James said. "It can be absolutely terrifying at times. Personally, I came home to a son who was four months old and did not know who I was."

1st Sergeant Brandon Casey, Bravo Company 1227, said that when looking for outreach programs for soldiers, they look for something that soldiers are going to want to do because they enjoy it.

"In our case, we are aircraft mechanics and this allows us to put the wrench down, put the toolbox away, hop on a horse, go for a ride and then sit and do something different to connect with each other while trying to build a relationship and talk about something that's pretty important to all of us," Casey said.

Participation in an SSO adventure is voluntary and not required by the United States Army or Fort Hood, yet Chaplain Moore chose it as a way to help soldiers heal and find engagement and a way of offering a lifeline for some who may otherwise suffer in silence.

"It teaches. That's a big component of this, teaching, listening and how to deal with stress management. How to slow down and create white space," she said. "Forgiveness, how to forgive, that's a huge lesson that we went through and that opened up many doors."

Moore said when events open up through soldiers battalion Chaplain, soldiers can tell them that they want to volunteer and that they would like to go on the next scheduled adventure. All of it, Moore said, is Chaplain driven and done so at the battalion levels.

"There is a lot of bitterness and anger and it all stems from unforgiveness," she said when asked how big of a driving factor unforgiveness is within the ranks. "They either don't forgive themselves or they don't forgive something that has happened to them."

Moore said that when soldiers hold back forgiveness, they actually make things worse.

"Sometimes this is that only escape," Casey said. "What we can do here with SSO and other organizations like them is to give that ultimate approach to try and solve the same unified problem."

"The more senior you get in the Army the harder it gets to engage with a younger soldier because they just see you differently," said Lt. Col. James, who embraced the chance to attend his first SSO adventure so he can help be the difference needed at The Great Place. "I think this is an opportunity for us to leverage this opportunity and then understand what the capabilities are that exist here and to empower our subordinate leaders with that same knowledge and so they, too, have the chance to come out here and do the same thing."